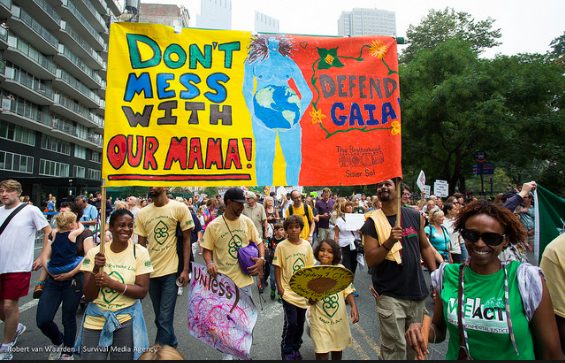 In case you haven’t been paying attention to the news, the largest climate change march in history happened in New York City this past weekend.

In case you haven’t been paying attention to the news, the largest climate change march in history happened in New York City this past weekend.

It was one of 2,646 climate-related events in 156 countries—all held in one day. Over 300,000 protesters turned up the heat at the People’s Climate March, urging world leaders to take global action on rapid climate change and other environmental issues. The event began at 11:30am and flooded city streets for two miles.

But for the lucky Richmonders that attended the People’s Climate March, the event actually began for them a bit earlier. Around 3:30am, in fact.

Lee Williams first got the idea to start a locally organized bus trip over the summer. After attending multiple marches and protests, Williams had become very passionate about environmental issues.

“I received an invitation back in July to attend an informational meeting about the People’s Climate March at VCU and signed up on the spot,” said Williams. “There is too much corporate money and they are allowed to pollute our air, our water and even our food without repercussions. I am angry and so I’m taking the fight to the streets.”

With trains not being an option due to Amtrak closing in the early afternoon on Sundays, Williams had to quickly scramble to reserve a bus driver and get documentation approved for the trip. And although sign-ups were slow at first, all the seats on the bus were filled and sold out days before this past weekend.

“Over 700 people came from the state of Virginia… and ages on our bus alone ranged from 14-66. Children and the elderly are on the front lines physically with increased rates of asthma related illnesses. Climate change affects everyone,” said Williams.

Among the many participants who also traveled to New York included Richmond local Amanda Sheffield, a VCU environmental studies major.

“I missed sign-ups for the bus but decided to go to the march anyway in a complete spur-of-the-moment decision,” said Sheffield. “So I called up my friends late Saturday night and we all crammed in a car and drove up to the city in the morning. The cause is so important and affects all of us—-even way down here in RVA.”

Countless numbers of activists and politicians joined the huge gathering in advance of today’s climate summit at the UN as well. Among the well-known faces included Leonardo DiCaprio, Mark Ruffalo, and even Al Gore.

VCU student Brian Dossen, one of the few on board for Sheffield’s last-minute car trip, said the experience surpassed what he had expected.

“I had high hopes this thing would be a big deal,” said Dossen. “But streets were totally insane. There were drums and horns coming from every direction. And when Leonardo DiCaprio walked by me protesting, I almost lost it.”

Summits have the capability spark great change. And with Governor McAuliffe recently approving a natural gas pipeline to snake through the state, and as Dominion Power continues to burn coal, Virginia is just as involved in the climate and environmental crisis as the rest of the world.

“It’s important for people to understand that what happened [this past weekend] to someone else may seem like nothing… until it happens tomorrow to you,” said Sheffield after coming home from the march. “I’m really impressed that so many from RVA came up to let their voices be heard.”