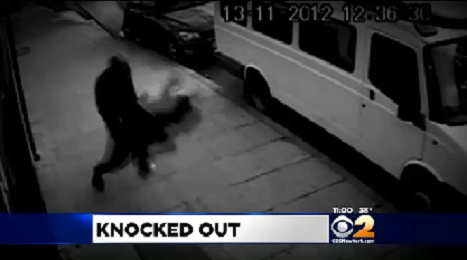 The recent media phenomena known as the Knockout Game has come to Richmond according to CBS 6.

The recent media phenomena known as the Knockout Game has come to Richmond according to CBS 6. Four Assaults reported in the Randolph neighborhood are being connected with the game in which people are randomly beaten up, their stuff is taken, and… well, yea. That’s kind of the crux of this unimaginative game. Here’s some details from from WTVR:

“It’s two to three, sometimes four male juveniles knocking pedestrians or bicyclists to the ground,” Det. Cutshall said. “When they knock them to the ground, they begin punching them and kicking them and taking whatever they have in their possession.”
….

The victims’ injuries in the attacks have grown more serious recently, he added. In some instances victims have been knocked unconscious or lost teeth in the attack.

“The suspects are pretty much the same description, they are described usually as black males between the ages of 14 and 16. They are 5′ 8″, thin and usually have short hair,” he said. “Every one of the victims so far has been a white male, approximately 18 – 21 years of age.”

He said the teens have not said anything to the victims during the attacks.

“They’re just knocking them to the ground and taking whatever and taking off with it,” Cutshall said.

Keep in mind there’s about as much reality in the knockout game as any other media frenzy (see bath salts). One of the first victims of the game, James Addlespurger, has come out and labeled his original 2012 assault exactly what it was – an assault. Addlespurger told the Huffington Post:

“I feel like I’m exploited,” Addlespurger told HuffPost Live. “People need a label. If they’re selling toothpaste or CDs, or news stories, they need a label … To me it’s an assault, plain and simple.”

The supposed trend, he says, evolved from his and a few other videos on the Internet showing men recording themselves knocking people out. But just because you can find it on YouTube doesn’t mean it’s a violent trend.

Hey, stop telling the media to not freak out and make stuff up, Addlespurger. You obviously have no concept of the news cycle and newsworthiness. You’re really harshing our buzz here.

So does Richmond have a crew of kids playing the knockout game? Or are there just some troubled kids beating up strangers and taking their shit? You be the judge, but if you catch any video of someone getting beaten up, slap the “knockout game” tag on your youtube upload and watch the internet explode for a bit.