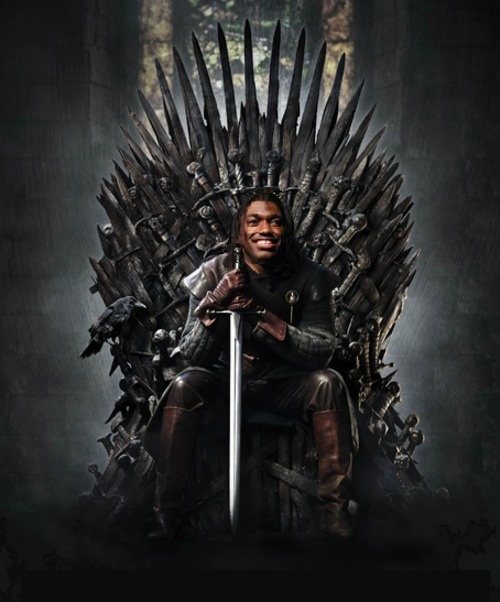 The current NFL world is a realized maniacal fantasy that makes going to the circus feel like what leaving the circus used to feel like. In a world where the Super Bowl winning quarterback was accused, then acquitted of, essentially sitting on footballs to subtly deflate them in between series (always having to explain he lost his ring cushion must have been a hassle), where fights are breaking out in co-practices conveniently in front of HBO cameras, where the Rams drafted a guy named Gurley to replace a guy named Stacy, we have to realize something bigger is going on.

Or at least probably. I’m no conspiracy theorist, so let’s exclude delusions of grandeur.

My job is to preach the bad news of the Washington R-Words, who are unfortunately very much at large and are raking in grown men’s hearts, hand over fist.

The evil metaphysical force we know as the R-Words remains on the cutting edge of villainy. All other villains, I hope you’ve been taking notes because the R-Words’ 2015 season starts way before game one. The dip in crime in the Fall shouldn’t be a surprise to anyone.

How can you commit crime when you’re glued to the TV and HogHaven.com, and belly up on pirate’s booty (clearly, every villain’s snack of choice)? Because, as any villain worth his salt will tell you, being a nemesis is just as much about time in the film room as time on the field.

While on the same bottom level of hell, from a football standpoint, as the likes of the Raiders and Jaguars, The R-Words’ true residence is much more toward the center of the eternal destination. Now, I’m not privy to the inner workings of the power structure over there, but we can be certain that if one were to look for the R-Words there, the throne room would be the place to start.

Once I were in hell’s throne room, if the person looking were me, it would be a mere matter of glances to find the R-Words. Or coverage reads, if you will. My first option would be the throne itself. If not there, to its right-hand side. If not there, and that would be surprising, my third read would be to the closest eunuch or jester of some kind. It’s by this time in the search that I would probably get tackled, depending on the accuracy of my “hell clock,” and that concludes the description of Robert Griffin III’s own personal hell: the pocket.

But my guess is it’s one of the top rungs of hell’s power ladder, and if not, it’s only a matter of time before the R-Words get there, just from sheer talent. The R-Words have earned it. The rise and fall of RGIII has been a huge resume builder for them, or more accurately, it.

Don’t believe me? Oh, I’m sorry, is this all too ridiculous to you? How about planning your weekends around a 3-hour football game viewing, followed by a 12-24-hour span of emotional fallout. How about spending $60 on a jersey for a guy you know will be out of the league in 3 years? How about $120 for tickets to actually go to see the epicenter of your biggest downfall of a human being: FedEx Field? How about raising your sons, our society’s future, to do the same?

You know you do it.

Because if you’re reading this far, you’re an R-Words fan, and you’ve just wasted 10 more minutes of your life on them, sorry: it.

Wake up and smell the Hog shit.

Here are three (of so many) reasons why you should believe in the intelligent design theory: The Washington R-Words are a debase, otherworldly artist whose entire existence is to cause Washington fans pain, long-term, hope-dangling, knife-twisting pain.

You can never, ever really tell what or who is to blame.

Ryan Leaf stunk. Jamarcus Russell stunk. Trent Richardson stinks. RGIII… was rated, by his peers, the 15th best player in the entire league after his rookie-of-the-year season. Players and coaches alike were awestruck by him in 2012. Just two years later, experts are rating in bottom five players at his position.

Something happened, but what?

Was it the ACL and LCL tears in his right knee during the 2012 playoffs? Was it Griffin’s private conversation with Mike Shanahan in the following offseason, where he explained he no longer wanted to be considered a running quarterback, but rather a pocket passer, and proceeded to make clear which plays were “unacceptable” for him to run (no pun intended)? Was he always a terrible quarterback, masked by the Shanahan’s brilliant 2012 playbook tailoring? Was it Dan Snyder giving him too much power, instead of trusting Mike Shanahan’s estimate that he was a 5 year project to become a pocket passer? Was it Jay Gruden’s insistence on forcing RGIII into being a west coast pocket passer when he’s clearly a dual threat athlete who never even had a playbook in college? Did he ever get a real chance after his 2013 sophomore slump season? Will he one day find another coach who can make RGIII work again and come back to beat the R-Words?

That’s the only question I can answer: Of course.

This year will be no different. I can’t tell you how bad the R-Words will be on the field, but it won’t be about that to the intelligent designer. It will be all about the confusion in the season’s wreckage. And then, it will be about the hope that inexplicably fills us all mere months later.

Annual silver linings like nip-slips of a SI swimsuit model who you’ll never have.

You know you salivate after them. The big name free agent signings. The NFL Draft. The cool-aid. Somehow, around May, we all start drinking it again. I won’t spend much time on this one now because you’re currently in its throws right now.

The current swimsuit model has a name: Scot Mccloughan

He’s our Harvey Dent. It’s okay, I’ve fallen for it too:

It has chosen a figurehead puppet who is way too convincing.

I used to hate him, it’s true, but now I just pity him. How the R-Words got to this innocent, boyhood R-Wards fan, roller coaster loving tycoon, I’ll never know. But Dan Snyder, I will admit, plays the part exceptionally well. The constant stories of abuse, tampering, power trips, and manipulation, really had me there. If we are victims to the R-Words nefarious game, then Dan Snyder has it the worst. They must be holding his firstborn hostage or his K’NEX or something because no one could actually be as evil as Dan Snyder seems, or as consistent recorded evidence explicitly proves.

This is exactly why we can’t believe Snyder is behind all this. It’s who’s controlling the strings attached to him that you should fear.

Going into the improvements along the defensive line, or our seemingly lucrative NFL draft this year, or the rebuilding Scot Mccloughan is secretly doing, or even what Kirk Cousins brings to the table as a quarterback would be an insult to your wisdom as an R-Words fan.

It’s all about what chapter of the epic tale of the Washington R-Words we’re in. From a performer’s standpoint, are the R-Words finished with the RGIII saga? Is his benching (again) a signal that we are starting a new tale, or is there more hope left in us the vampire can suck dry? Is it time for him to get off the stage?

If Gruden is to lay an egg in his rookie season and be made to pay for his early benching of RGIII with a boot to the curb, then the R-Words would be turning into a rote sequel writer. That’s too similar to The Zorn and Spurrier years. My money is on the R-Words still having stamina in its pen.

R-Words fans’ hope level is at a historic low. My guess is it’s time for more hope dangling:

Expect a surprising, yet confusing 7-9 season.