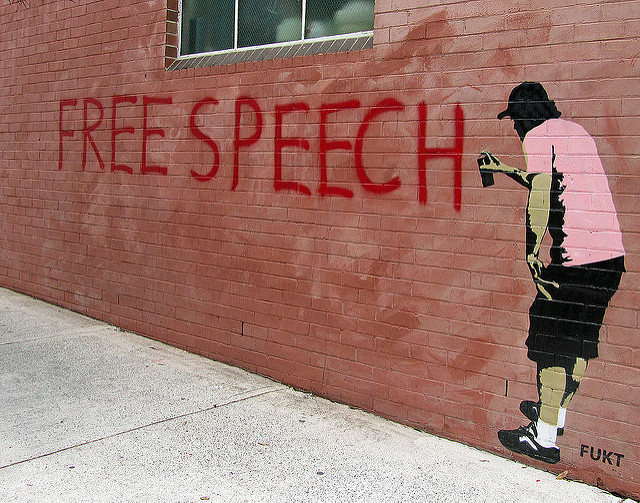 Virginia Delegate aims to secure free speech on campus, no matter the subject

With the possibility of Dr. Ben Carson’s cabinet appointment to head the Department of Education, the college and university campus free speech debate is more relevant now than ever.

With the possibility of Dr. Ben Carson’s cabinet appointment to head the Department of Education, the college and university campus free speech debate is more relevant now than ever.

Carson, who has referred to Darwin’s theory of evolution as being “encouraged by the Adversary” and called the Big Bang theory “ridiculous,” described how he would use the DoE to monitor and penalize speech on university campuses which he did not approve of in an interview with Glenn Beck. “I actually have something I would use the Department of Education to do,” said Carson. “It would be to monitor our institutions of higher education for extreme political bias and deny federal funding if it exists.”

The Washington Post reported on Carson’s defense of this statement. “It’s not a violation of the 1st Amendment,” said Carson, “because all I’m saying is taxpayer funding should not be used for propaganda. It shouldn’t be.”

Considering Carson’s long standing complaints about how “political correctness” and the “PC police” restrict free speech by disagreeing with him, his intention to deny federal funding to educational institutions if they meet his standards for political bias is a clear danger to free speech rights on campuses across the nation.

In this evolving context, Virginia’s HB 1401, which is due to be voted on in the coming 2017 legislative session, aims to involve state legislators in such matters.

The bill states that no public institution of higher education will be allowed to abridge the free speech of students, faculty, staff, and invited guests to speak on campus “except as otherwise permitted by the First Amendment.” The bill can be read in full here.

The bill leans on the First Amendment to the Constitution for essentially all of its language, rather than providing any new, specific protections.

“Current state code covers faculty and students, but does not cover other staff members on campus, or lecturers who come on campus or invited speakers,” he said. “There has been, not necessarily in Virginia that I know of specific cases, but there have been incidences in other states where especially individuals or other speakers on campus are not allowed their free speech rights.”

It is a large topic, with a vast number of cases that are potentially relevant, featuring a number of polarizing views. In an attempt to sort through some of the perspectives on this issue, PEN (Poets, Essayists, and Novelists) America, a group existing at the intersection of free speech rights and creative expression, released a report titled “And Campus for All: Diversity, Inclusion, and Speech at U.S. Universities” [https://pen.org/on-campus] on October 17 this year in an attempt to analyse some of the perspectives and discussions of these issues.

“And Campus For All” outlines the concerns and interests of various groups involved in the campus free speech conversation and conducts in-depth examinations of several high profile free speech controversies with exclusive interviews. In the report’s introduction, PEN America establishes that its goal is to reconcile the discord that has sprung up between student activists and free speech advocates.

“We broach this issue out of a sense of related concerns that are deeply embedded in our mission,” reads the report. “These controversies are giving students a false sense that the speech of some takes priority over that of others; that ideas of freedom of speech and freedom of association are becoming dangerously dissociated, when in fact they depend heavily on each other; that the liberal values of free speech, non-discrimination, and inclusion are being needlessly and unhelpfully pitted against one another; and that a rising generation may be turning against free speech because some of its more forceful advocates have been cast as indifferent to other social justice struggles.”

Delegate Landes was not able to identify any cases that HB 1401 could have addressed here in the Commonwealth, but referred to the work of Foundation for Individual Rights in Education (FIRE), which tracks incidents of free speech violations on university campuses across the country.

Joe Cohn, Legislative Director of FIRE, thinks that HB 1401 can contribute to an environment of free speech on campuses. “I think it’s important in the context that we are seeing an incredible amount of censorship on university campuses nowadays,” he said, “and Virginia took the first step in fighting back on that in 2014 when it passed the Campus Free Expression Act.”

The Campus Free Expression Act, signed into law by Gov. Terry McAuliffe, got rid of so-called “free speech zones” which limited rallies and other public forms of expression to specific spots on campus, like VCU’s compass area.

Cohn agreed with Delegate Landes that it is important to have protections like implemented into local government. Like Delegate Landes, Cohn said that universities might disregard the Bill of Rights, but that a local bill would make them think twice about contradicting the Constitution.

“One way to read this bill is that it’s simply a statement of what is already in the law,” said Cohn. “But if you’re in the compliance office of a public university of Virginia, not all of them are looking up common law, but they sure as heck know what the legislature said to them next term.”

Cohn also suggested that school administrations could resort to alternative means to demonstrate that they might not endorse a speaker, especially if they express views that could be construed as hateful.

“If the administration can encourage students to stand up,” he said, “and say, hey, I understand that what someone said is protected, [but] it doesn’t represent our values as a community and I invite everyone else to come on out and show to everyone else that the vast, vast majority of us refute that point of view.”

Cohn drew special attention to Virginia Tech’s disinvitation of Jason T. Riley, a Black conservative columnist for the Wall Street Journal, which occurred this past May, noting that the disinvitation came even without student protest.

Riley wrote a column about his experience, noting that speaker disinvitations have become more common on college and university campuses.

Virginia Tech’s President, Tim Sands, made a formal announcement days later reinviting Riley to speak on campus. In the announcement, President Sands says that the disinvitation came about as a result of an interdepartmental communication error.

The disinvitation of Riley occurred a couple months after an incident in March, when Virginia Tech disinvited conservative psychologist and author Charles Murray from speaking on campus after student outcry and protest. Murray, who’s 1994 book The Bell Curve spoke about intelligence vs. upbringing and linked IQ scores to race, was reinvited after the case received media attention, with Tech’s President Sands penning an open letter about the college’s decision to let Murray speak despite scientific objections to the author’s methodology.

“This will not be the last time that a student group, a faculty member or the administration invites a speaker whose views will be regarded by some in our community as repugnant, offensive or even fraudulent,” Sands said. “The dichotomies of free speech vs. censorship and civil discourse vs. hostile discourse intersect but are not equivalent.”

PEN America’s recent report, while dismissive of the idea that free speech on campus is in a crisis state, puts forward an argument similar to Cohn’s, emphasizing that student discussion about or against certain language is a healthy example of free discussion. “At times protests and forms of expression are treated as if they are incursions on free speech when in fact they are manifestations of free speech,” says the report. “Some entreaties for or against the use of particular language (even if the terms sound neologistic, overly politically correct, or otherwise distasteful to some ears) should be recognized as adaptations to students whose ethnic and racial backgrounds, upbringing, and priorities may bear scant resemblance to the populations that dominated the university campus during the second half of the 20th century.”

“And Campus for All” also specifically defends campus speakers, saying that universities have an obligation to invited guests once an invitation has been extended. The report specifically addresses concerns that a speaker’s presence might incite violence or protests.

“The university needs to have the integrity to stand by its choice and to embody the idea that divergent perspectives must be allowed to coexist, even if noisily, rather than allowing one point of view to simply shut out others,” says PEN America’s report. “It is also important to consider that whereas some students may forcefully object to a particular speaker, there may well be others who wish to hear the speaker but have not voiced their views as vociferously.”

For those less involved in the academics of free speech, like Claire Guthrie Gastañaga, executive director of the ACLU in Virginia, HB 1401 remains “unnecessary.”

“The First Amendment already limits the ability of public universities to ‘abridge’ free speech by anyone on campus,” Gastañaga said in an email to RVAMag. “Be they student, faculty, other employee or guest, subject to reasonable time, place, and manner rules as recognized in 23.1-401. This bill is unnecessary. The First Amendment applies regardless of the existence of any state statute like this.”

HB 1401 will be examined by the state legislature in January 2017. RVAMag will do its best to follow the bill as it progresses.