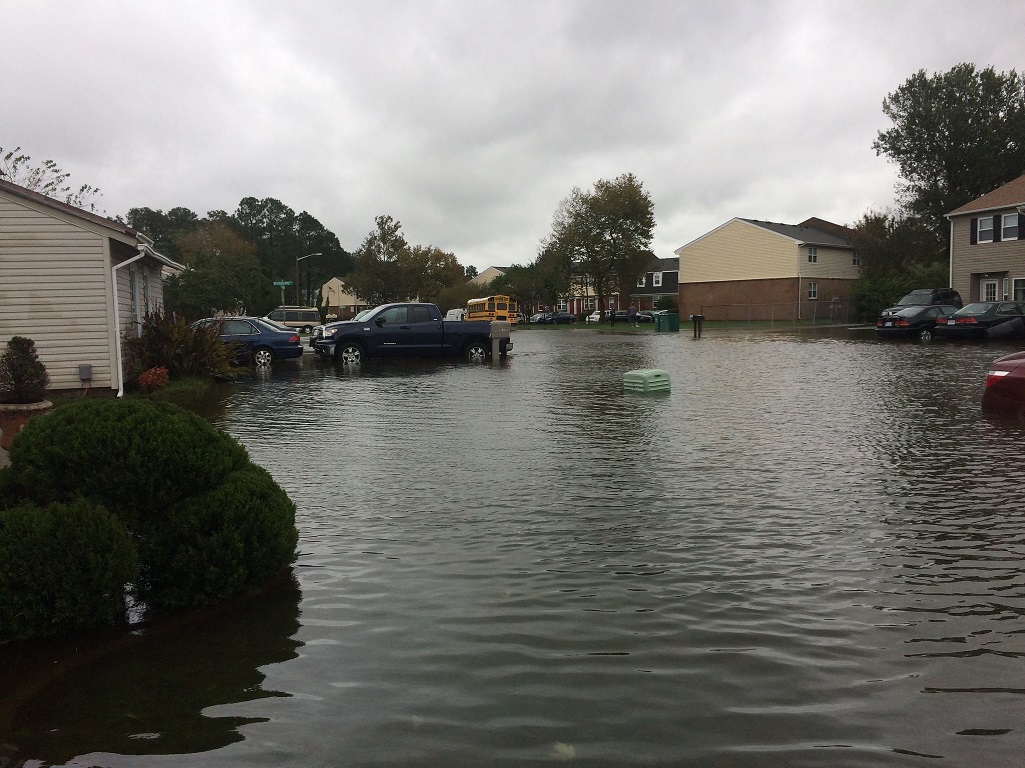 “Animals have three choices when habitat changes: they can move, adapt or die,” said Yorktown Watermen’s Museum Director of Education Mike Steen. Steen said humans can adapt much easier than animals; they don’t have to wait for evolution. Humans have the option to change their homes and fortify their environments in response to the effects of climate change.

The Watermen’s Museum brings history to life; Steen dresses as a pirate for camps and events, there is a boat’s deck and windmill to explore, and plenty of artifacts rest inside the historic building. However, many of Steen’s educational programs bring the focus out of the waterfront’s past and into its future. The museum’s section of beach along the York River boasts a natural shoreline, abundant with grasses to protect the museum from flooding. Depending on the time of year, field trippers and summer camp kids can be found gathered around the back of the museum learning about sea level rise, measuring tides, and projecting how floods will affect the waterfront.

No General Assembly funding for Virginia Shoreline Resiliency Fund, yet

As the sea level rises and land sinks in Virginia, residents along the coast are at risk of flooding. Localities along the coast have created or implemented mitigation strategies to help coastal residents and businesses fortify their properties against high water. The General Assembly passed a bill in 2016 establishing the Virginia Shoreline Resiliency Fund to provide localities with low-interest loans to help residents and businesses with flood mitigation expenses. However, no money has been allocated to the fund since its creation. The legislature has made efforts to change the fund’s function in the past, and in 2020 there will be another attempt at restructuring the bill.

“Localities and planning districts and residents are certainly interested in resilience to flooding,” said Rear Adm. Ann Phillips, special assistant to the governor for coastal adaptation and protection.

Areas prone to flooding such as the Watermen’s Museum are feeling pressure to mitigate the effects of flooding on their property.

“You have to plan,” Steen said. “We just can’t up and move, and adapting costs large amounts of money.”

According to A TruBuilders Inc., it takes anywhere from four to eight weeks to raise a home. Since hurricanes and nor’easters don’t schedule their appearances a month ahead of time, homeowners have to make the decision to raise their homes without knowing when the next flood will be and how high the water will rise.

“It’s going to cost you money to get that loan to raise your house. You’re not going to even look at doing that unless you’re forced to,” Steen said. Waiting for a disaster to strike, even with flood insurance, can be an even steeper wager.

“The National Building Council has shown that $1 invested in pre-disaster mitigation saves $6 post-disaster, depending on the kind of resilience intended,” Phillips said.

Virginia has a donation-based disaster relief fund that provides grants for organizations that focus on providing aid to victims of natural disasters. The Virginia Shoreline Resiliency Fund is designed to loan money to localities before a flooding disaster.

“They would have an opportunity to borrow money to help their communities and in particular, the language is written, localities could borrow so that they would be helping residential and business property owners,” Phillips said.

The governor is responsible for proposing money for the Virginia Shoreline Resiliency Fund, and the General Assembly is responsible for the final decision to allocate money in their annual budget, which hasn’t been done since its introduction in 2016, according to Phillips.

“When a budget gets written, there’s thousands of things that money needs to go to and this is one that just hasn’t been pushed hard enough,” said Virginia Conservation Network Communications Manager David Oglethorpe.

The VCN is calling for $50 million to be allocated to the fund annually.

“By putting more money or putting $50 million into the Shoreline Resiliency Fund, Virginia can start to make those moves to adapt to the impending sea level rise,” Oglethorpe said.

Del. Joseph Lindsey, D-Norfolk, prefiled a bill this month for the 2020 Virginia General Assembly to change the fund from a low-interest loan to a grant system. Similar to the loan system, the money would be distributed to localities to help residents and businesses subject to recurrent flooding. With a grant system in place the money given to property owners would never have to be repaid. Lindsey did not respond to multiple requests to discuss the fund or the new bill.

During the 2019 General Assembly session there were bills introduced in both the House and Senate to recast the fund as the Virginia Coastal Protection Act. This act would be funded by money from the sale of carbon emissions allowances. The protection act would be used not only for the mitigation of flooding hazards, but also to support energy efficiency programs and revitalize areas of Southwest Virginia impacted by the decline of the fossil fuel industry. The House bill was left in the Commerce and Labor Committee and the Senate bill died after being passed by indefinitely.

Since 1950, coastal Virginia has seen its sea level rise more than 14 inches, according to the National Oceanic and Atmospheric Administration. This rate is one of the highest on the U.S. East Coast, according to the World Resources Institute, a global research organization based in Washington D.C. that collects and analyzes data. The Hampton Roads region is among the largest population centers, second to New Orleans, facing sea level rise. The area also has the world’s largest Naval base and the second largest concentration of military activity in the U.S., outside of the Pentagon. Sewell’s Point, a peninsula at the mouth of the port in Norfolk, is expected to see sea levels rise six additional inches by 2030, a rate twice as fast as the most recent measured six-inch increase.

“Areas that are very flat, very low elevation are going to be the areas that are experiencing the most increase in flooding,” said Molly Mitchell, a Virginia Institute for Marine Science researcher. “They’re going to see the biggest impact in the near future.”

Facing these realities, localities in the coastal Virginia region are already creating action plans to address the issue.

Hampton has received $11 million from the federal and state government to aid in elevating homes at risk for future flooding. The voluntary program is available to homeowners that meet the cost-to-benefit ratio set by FEMA. However, the cost of raising each home is $250,000, and homeowners could be on the hook for up to 25 percent of the total cost of house raising, plus the cost of temporary relocation, according to the city of Hampton’s website.

“Hampton officials acknowledge that it is a flawed program,” the city’s website says. “However, at the moment, it’s the only federal or state program that offers assistance to homeowners facing frequent flooding damages.”

Norfolk, meanwhile, made a comprehensive plan, Vision 2100, that addresses sea level rise in residential and commercial areas of the city. The city faces an expected sea level rise between 1.6 and 2.6 feet by 2100, meaning about 3-5 percent of the city’s dry land would be underwater daily.

Norfolk’s Vision 2100 plan divides neighborhoods into high risk and low risk areas based on sea level rise projections, and creates plans based on the risk and expected composition of the neighborhood.

Norfolk plans to become a model for resilience by expanding the flood protection system, improving transportation and building a housing market with buildings expected to last a century.

In Virginia Beach, the Department of Public Works is studying sea level rise and flood vulnerability across the city’s major watersheds. They are working to implement plans, including a review of the storm drain system in the city.

Virginia Beach, the most populous city in the commonwealth, has started blocking development in areas where sea level rise is expected to create more flooding in decades to come. Virginia Beach Mayor Bobby Dyer did not respond to requests to comment on this story. However, Dyer cited a recent New York Times article discussing this initiative.

With Democrats holding a majority in the General Assembly for the first time in a generation, Wallace is optimistic that more will be done to address sea level rise and climate change in the commonwealth.

“I expect to work with the General Assembly to pass bold climate legislation,” Wallace said. “This new majority will really like what we are doing. They recognize the urgency of the issue and know that it requires immediate action.”

Correction, 1/10/20: Capital News Service has updated the original version of this article that contained quotes from an interview in which the details of Norfolk projects were conflated. That interview has been removed from this article.