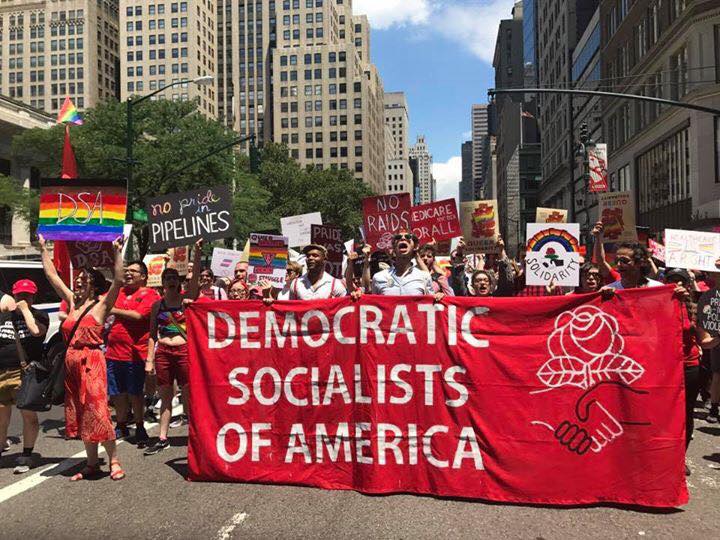 The term “Democratic Socialism” has been thrown around a lot lately in politics. Senator Bernie Sanders openly identified as a democratic socialist in the presidential primaries last year, differentiating himself and subsequently creating a split in base between himself and the more traditional Democratic candidate, Hillary Clinton. On November 9, 2015, Sanders gave a long speech at Georgetown University about democratic socialism. Sanders helped popularize the term; however, its usage goes far beyond the Sanders campaign.

The Democratic Socialists of America (DSA) is a grassroots organization that has been gaining a lot of attention as a result of the 2016 election and Donald Trump’s presidency. Formed in 1982, DSA was created when two prior organizations, the Democratic Socialist Organizing Committee (DSOC) and the New American Movement (NAM), merged to create a singular organization. Both organizations had a history of contributing to community organizing, trade unions, and feminist movements. In 1983, the organization had reached 8,000 members, according to the DSA’s website.

Today, the DSA, which supported Sanders in the Democratic primary last year, recently surpassed 25,000 members, making it the largest socialist organization in the United States since the 1940s, as reported by Salon.

As of July 2017, the organization reported having 164 chapters nationwide, with chapters in cities such as Richmond, Charlottesville, and Washington D.C. There are also several Young Democratic Socialists (YDS) chapters in schools, including Virginia Commonwealth University, University of Virginia, George Mason University, and Virginia Tech.

But why are people joining the DSA?

Michael, a Vice Chair of the Charlottesville DSA chapter (who requested us not to print his full name for safety reasons), said that he joined the organization because he became disappointed with the Democratic Party after working with them on several campaigns.

“The Democratic Party is very captured by corporate money, and corporate interests dictate a lot of what the Democratic Party does, which constrains the policies you can advocate for,” Michael said. “Whereas DSA, being a grassroots organization, is able to fully advocate for Medicaid for All, 15 dollar minimum wage, prison abolition, all of those really fundamental changes.”

This dissatisfaction with the Democratic Party has also resulted in members running against established Democrats. Earlier this year, Ross Mittiga ran against House Minority leader David Toscano in the Democratic primary for the 57th District seat in the Virginia House of Delegates. Disappointed in Toscano’s corporate donors, as well as his views on issues such as the Atlantic Coast Pipeline and minimum wage, Mittiga decided to take on the job of campaigning against him. Soon after Mittiga decided to run, DSA endorsed him after he met with DSA leadership and spoke at a DSA meeting in Charlottesville. According to Mittiga, DSA’s endorsement was vital in assisting the campaign, as volunteers were able to knock on doors and make phone calls.

“DSA folks ended up being the single biggest source of support I’ve had throughout the whole campaign,” Mittiga said. “We even had high school DSA chapters making calls for our campaign on their lunch breaks.”

Although Toscano outperformed Mittiga in the primary, Mittiga was able to obtain approximately one-third of the vote and pressured Toscano to move further left on some of the issues. Because of this, Mittiga considers his campaign to be an achievement.

“Toward the end [of the] campaign, he went from saying nothing about living wage, to saying very nebulously that he supports a living a wage […] and then, at the very end of the campaign, he started saying, ‘We need to have a living wage of 15 dollars an hour,’” Mittiga said. “People are a lot more alive to his centrism, and I think even more importantly than pushing him to the left, I think we pushed the citizens of Charlottesville to the left.”

After the campaign, Mittiga joined Charlottesville DSA, and is currently working on starting an environmental committee within the chapter.

Austin Gonzalez, Chair of the Richmond DSA chapter, also shared his frustrations with the Democratic Party, and how the DSA can do better.

“We actually fight for radical change in the American political system,” Gonzalez said. “Feasible but radical change rather than reform or gradualism, which is all that you’re going to find within the Democratic party.”

Richmond DSA’s primary focus is currently on dismantling the Confederate monuments that are on Monument Avenue, Gonzalez said.

“As a person of color that has lived in Richmond for the majority of my life, it’s not exactly the most reassuring thing to have to drive by these monuments on a daily basis,” Gonzalez said. “With the background of Charlottesville, this would be incredible not just as a moral victory, but an incredible victory for human rights in Virginia.”

Richmond DSA has worked with Food Not Bombs, an anti-militarism group dedicated to feeding the poor and working to end homelessness. Richmond DSA also recently started cleaning bus stops around the city, according to Gonzalez.

“Another thing we think is important is to actually speak to members in these poorer communities to see exactly how we can help them,” Gonzalez said. “Rather just imposing our will on them just for a good photo op.”

As for Charlottesville DSA, Michael said that they’re focusing on issues such as opposing the Atlantic Coast Pipeline, abolishing the Right to Work law, and, in light of the recent events in Charlottesville, focusing more heavily on issues of racial justice.

As the DSA pushes for universal health care at a national level in response to the Republican Party’s various health care plans, members of the DSA are encouraging new people to join.

“I think DSA is an organization that can help break through some of the alienation and help people organize in their local communities,” Michael said. “That’s really the only {way} we’re going to get through the Trump administration, is collectively organizing in a way we haven’t been before.”

*Ryan Persaud is a member of the DSA.