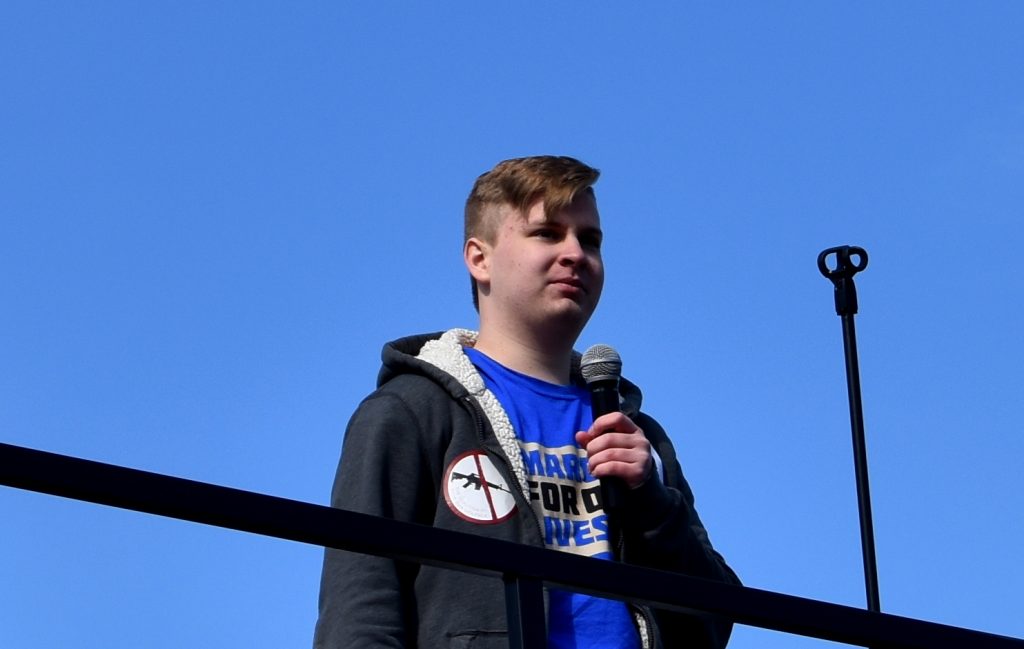 “I communicate with people more with Twitter and Snapchat than I do with text.” he said. “I think social media is the new frontier for engaging with young people.”

Nineteen and fresh out of highschool, this Montpelier teenager is the quintessential millennial at face value: young, active on social media, plays video games. But this millennial has an interesting passion–one that will bring Chaz on with RVA Magazine as a new featured columnist in time for upcoming midterm elections.

Rather than Instagramming or chasing love, Chaz spends his free time running political data analysis with profound accuracy. Chaz represents a new movement in the millennial generation: They don’t wait to be invited to the grown-up table, but take initiative in representing the communities we live in and replace patience with initiative. “With the energy the president has, I feel like as a progressive, you have to have the right energy to fight back,” he said.

As a Hanover County resident, Chaz grew up in a conservative atmosphere with many of his friends and family holding conservative views. He first took notice of these political leanings at 13 during the 2012 presidential election. “I think it’s a little bit weird to be a conservative millennial,” he said. “When you look at the Republican party’s platform, I think that conservative millennials are not driven by policy, but rather being unique. Most millennials are Democratic, so I feel young conservatives are concerned with being an edgy counter-culture type. They’re like hipsters, pretty much. I’ve never had a fluid debate with a conservative young person, they don’t care about economics or medicare. They just like sticking it to the libs and the culture.”

Despite their difference on politics, Chaz said his dad, an ardent conservative and Virginia Tech alumni, has been very supportive of his civic activism. “Back when I couldn’t even drive, my dad would take me to the events,” he said. “They’re glad I’m going out and being active. I think that’s something our youth today definitely need to do more of. [My dad] agrees with me on gun control issues.”

Only recently jumping into the political arena after Trump’s inauguration in 2016, Chaz has been involved with several state legislative campaigns as democratic pundit, helping campaigns through his political predictions. He joined Tom Perriello’s campaign in 2017, where he flourished as a sociable, data-savvy activist. Fast forward to 2017, when he began looking at predictions from Trump and Clinton’s campaigns within their margin of victory. It turned into fascination.

Although Perriello lost the race, Chaz gained a strong interest in political data, following sites like Flippable and Decision Desk. His predictions outperformed those of organizations like Cook Political and Daily Kos, though he humbly says this was simply a home field advantage. “I know the state politics pretty well,” he said.  “I’m pretty good at predicting what swings right now, in the Trump Era.”

Where are they swinging? “All left, on all levels, especially here in Virginia.” And according to Chaz’s districts, he’s not too far off. For Chaz, reputation and accuracy is everything. “My political views don’t factor into my ratings.” he said. “I’m clearly aware where Democrats do well and where they don’t, but I’m able to seperate my biases from my analyses.”

But Chaz isn’t unwilling to listen to multiple points of view. Del. Buddy Fowler, a hardcore conservative and Chaz’ current representative, sat down with him and sought middle ground on local issues. “I feel like that’s something we need more of in this country, to at least be able to start a conversation and find common ground,” he said.

As an activist, Chaz works with state and local campaigns (such as Tim Kaine’s) covering counties in Hanover, Henrico, and Goochland as a Democratic pundit on the front lines and on Twitter. “In order to be able to do my job well as a pundit, I always need to be out there where the politics are,” he said.

And he’s not even that good at math. “Just political math,” Chaz said, emphasizing that aside from a baseline background in math, it’s all about proper research. “I look at past statewide results, past district level results, county precincts, candidate quality, money raised, national party targeting–you’ve got to get as much information as you can.”

Chaz says he’s not savvy enough to predict his own formula, but instead ditches the chalkboard and janitor routine to utilize the ‘margin of victory’ statistical method, avoiding assumptions by evading probability methods. “I don’t use the word ‘safe’ like a lot of pundits do when talking about a [congressional] seat,” he said. “There is no such thing as a safe seat. I use the word ‘strong,’ which I find to be much more appropriate and accurate.”

I asked Chaz if he has someone he looks up to, and his response surprised me. “Kanye West,” he said. “Obviously I don’t agree with all of his political opinions, but his Twitter is very entertaining.” We delved in discography, discussing Kanye’s newest releases and discrepancies over Kanye’s best work. This was the first time anyone insinuated that I’m getting old.

So I asked, why Kanye? “There’s no mood I can’t be in to enjoy to Kanye. He’s a genius in the musical sense, in that he is narcissistic, but [he also talks] about self-love, a recurring philosophy in his work I love to live by.” Chaz understands that message and wants to propel it through his work.

Now that Chaz is graduated and has a passion for politics, Chaz plans to attend J. Sargeant Reynolds Community College for two years before transferring to the UVA political science program. “They have a really good program. Larry Sabato [UVA political science department head]–he follows me on Twitter.”

Even with a clear path and a sizable social media following, Chaz isn’t too sure where his trail will take him after school. “I’m not sure after graduation where my path will take me, definitely somewhere in politics, maybe teaching, I don’t know,” he said. “I’m just thinking about the campaigns right now.” While he looks to be hired in the August Batch for the Kaine campaign, right now he’s just enjoying his summer vacation.

Over the summer, you’ll hear more from Chaz in his upcoming column, offering analysis and election projections from Virginia and beyond in the midterm elections.