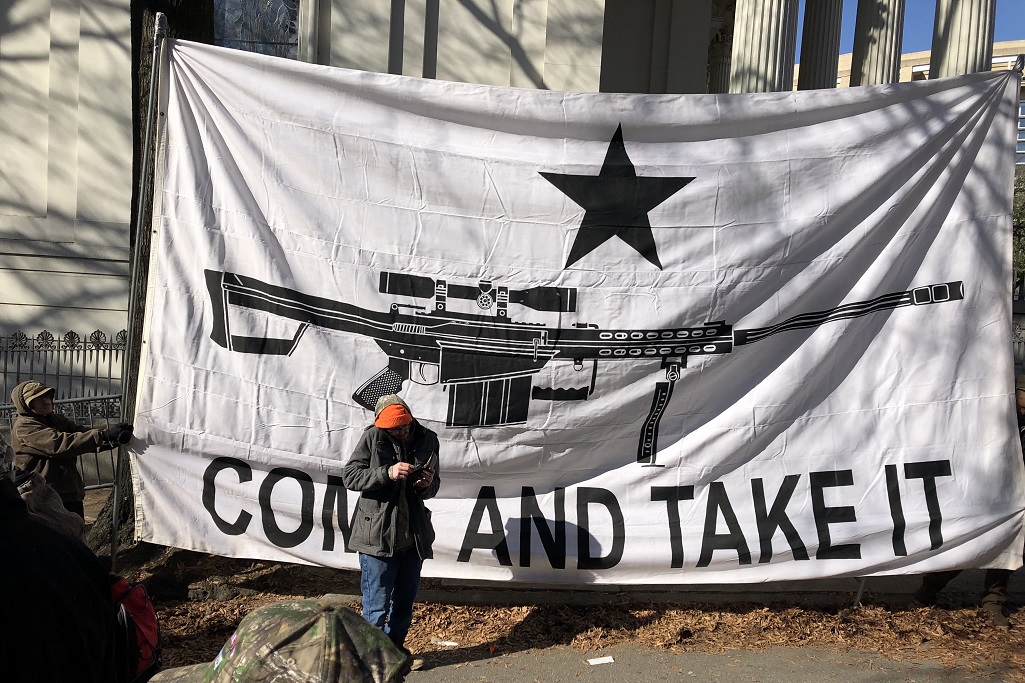 The Capitol Square gun rally Monday managed to avoid outbreaks of violence, but the abundant rhetoric still struck an ominous note for the Commonwealth.

After all the talk, after all the hype, lobby day in Richmond on Monday came and went without any serious incidents from the around 22,000 overwhelmingly white protesters who assembled in Capitol Square to let the governor know their feelings on any future gun legislation. (Spoiler: They’re against it.)

There were no shots fired, no fights, and the only arrest made was of one young woman for wearing a mask that covered her face — despite the fact that I personally witnessed dozens and dozens of people covering their faces. There was a lot of bluster, as well as a lots of implied threats about “corrupt government,” a lot of rhetoric about Governor Northam being a tyrant, and a circus atmosphere — complete with Alex Jones of InfoWars cruising the streets around the Capitol in an armored truck with a megaphone, right across from another truck carrying a large sign that said “Epstein didn’t kill himself.”

So how did this all happen?

The wheels for this rally were set in motion on November 5, 2019, when Democrats took control of the state legislature. This marked the first time they had control of both houses of the General Assembly as well as the governor’s office since 1994. Almost overnight, a number of 2nd amendment-related facebook groups popped up with names like “Virginia Rising,” “Take Back Virginia,” and “Virginia Patriots.” These groups regularly updated their members with information, both real and imagined, about what the Democrats would do to infringe the gun rights group members felt were God-given.

The Virginia Citizens Defense League, founded in 1994 in reaction to the last time Democrats took over the state, immediately started planning a rally for January 20, the traditional Lobby Day for the General Assembly. Piggybacking off a movement beginning in other states, first Illinois and then moving on to Arizona, Florida, Texas, Colorado, Illinois, California, and New Mexico, individual municipalities around Virginia declared that they would ignore laws that would take away their 2nd amendment rights. These municipalities often took on the moniker of “2nd amendment sanctuary cities.” As of January 16, the number of cities and towns in Virginia that have signed on to this pact is 105 and growing.

Fun fact: Phillip Van Cleave, the president of the VCDL and the main speaker at lobby day, was featured last year in an episode of the Sacha Baron Cohen TV series Who is America? In the show, he was coerced by the comedian into saying that three-year-olds should be armed in classrooms; he even did a fake commercial, holding up guns with cutesy puppet attachments.

The major issue for these 2nd Amendment defenders was the Democrats’ proposal of “red flag laws” that would allow guns to be confiscated if the owner’s possession of them posed a “substantial risk of injury to himself or others.” As of today, this law is still pending; it has passed the Virginia state Senate, but must be approved by the House Of Delegates before going to Northam. This bill became a flash point, and remained so at the rally on Monday, as signs, including a large banner, showing a semi-automatic rifle and the words “come and take it” can attest.

This bill, which represents tyrannical government overreach to its detractors, along with governor Northam’s decision to declare a state of emergency the weekend before the event and ban weapons from Capitol Square, sent many people who were already mistrustful of government into overdrive. On Friday, three days before the event, state Senator Amanda Chase, who later spoke at the event, wrote on Facebook that 2nd Amendment advocates were being set up and warned that “if anything goes wrong… you could be arrested as a domestic terrorist.” Of course, as RVA Magazine learned from the FBI in the aftermath of the 2017 Unite The Right rally in Charlottesville, a US citizen cannot be prosecuted for domestic terrorism.

An hour of speeches were scheduled for 11 am at Lobby Day, but when I arrived at 7:30 am, there were already thousands of people stretching around every corner. Along with many others, I milled around, waiting for something to happen and unsure of where to go. Perhaps we were waiting for that promised threat of violence. “We hope it’s not another Charlottesville,” Phillip Van Cleave had said.

Signs were being distributed en masse that said “94% of Virginia localities say: No more gun control.” Other signs showing the famous blackface and KKK photo from Ralph Northam’s old medical school yearbook, captioned with the words, “The man behind the sheet wants your guns.” The mood of the attendees was proud and defiant as they stood side by side with their fellow advocates, many carrying large rifles and declaring their 2nd Amendment rights to be non-negotiable.

The narrative you believe about Lobby Day seems to depend mainly on whether you are for or against the proposed legislation it was reacting to. There doesn’t seem to be any middle ground. There wasn’t a whole lot of nuanced discussion along the lines of, “I hate this proposal, but this other one has some merit.” In speeches, chants, and slogans, Governor Northam was regularly referred to as a tyrant; in the crowd, some held signs that referenced the state motto of Virginia, “sic semper tyrannis,” translated as “thus always to tyrants.”

Inside the Capitol Square, we were all unarmed; it was so crowded that while I was able to record audio from the hour of scheduled speeches, I was unable to see them. The 13 speakers largely reflected everything I had seen online and heard in the hours of chants leading up to their speeches, where people on microphones rallied the crowd with chants of “U-S-A, U-S-A,” “we will not comply,” and a complete sing-along of the “Star Spangled Banner.”

The speakers pounded home the talking point that gun rights are given to us by God, the Constitution upholds those rights, the right to bear arms shall not be infringed, and therefore, in light of all these things, the proposed laws are unconstitutional, and so are the lawmakers proposing them.

Here are some samples of what they said in their speeches:

Virginia Senator Amanda Chase: The governor is violating your constitutional freedoms.
Virginia Delegate Nick Frietas: All of us have an inherent right to self-defense.
Virginia Delegate John McGuire: Common sense gun legislation is the Kate Nixon bill, which says that if you get shot in a gun-free zone, you can sue the governor.
Sheriff Danny Diggs: I’m from York County, where we dealt with a tyrant.
African American Pro-gun advocate Antonia Okafor: It makes sense that it’s MLK day, because we are all Americans and we bleed the same… In Texas we like to say, “Come and take it!”
Pro-gun advocate Dick Heller, who won a lawsuit overturning DC’s handgun ban: Today on Martin Luther King Day, our character is of freedom.
WRVA radio host Jeff Katz: We may have come on different ships, but we are in the same boat now.

Many referenced Martin Luther King Jr., whose birthday was also celebrated on Monday. However, none mentioned that King, a noted advocate for non-violence who was murdered by a gun, gave up his own guns years before his death.

The larger media narrative reported that Lobby Day was a peaceful event. However, make no mistake, these are not peaceful ideas. They do not allow room for negotiation; the life-size guillotine set up on the street right outside the square indicated as much. The language many advocates use is certainly bluster, and few people take their implied threats seriously, but when they speak of a new Civil War or sacrificing their life for their rights, as shown in this InfoWars video, it’s obvious that they are passionate about it.

When the measure of success of a large-scale event is that no fights or shootings took place, that’s a pretty low bar. And based on the temper of the crowd, it seems likely that if counter-protesters hadn’t mostly chosen to stay home, even this bar might not have been cleared.

Meanwhile, Virginia’s Senate has continued to pass the very laws gun advocates rallied so fiercely against — and with the House Of Delegates containing an even larger Democratic majority, chances are good that the bills will soon proceed to Governor Northam’s desk. The future infringement protesters railed against is likely to become a reality very soon. Hopefully, the “peaceful” atmosphere can continue to prevail.

Joshua Dudley is a freelance writer, actor, and comedian who lives in the Hampton Roads area. He’s beating Chrohn’s disease but still has more articles published this year than anyone else you know that went to the emergency room 4 times in 2017.