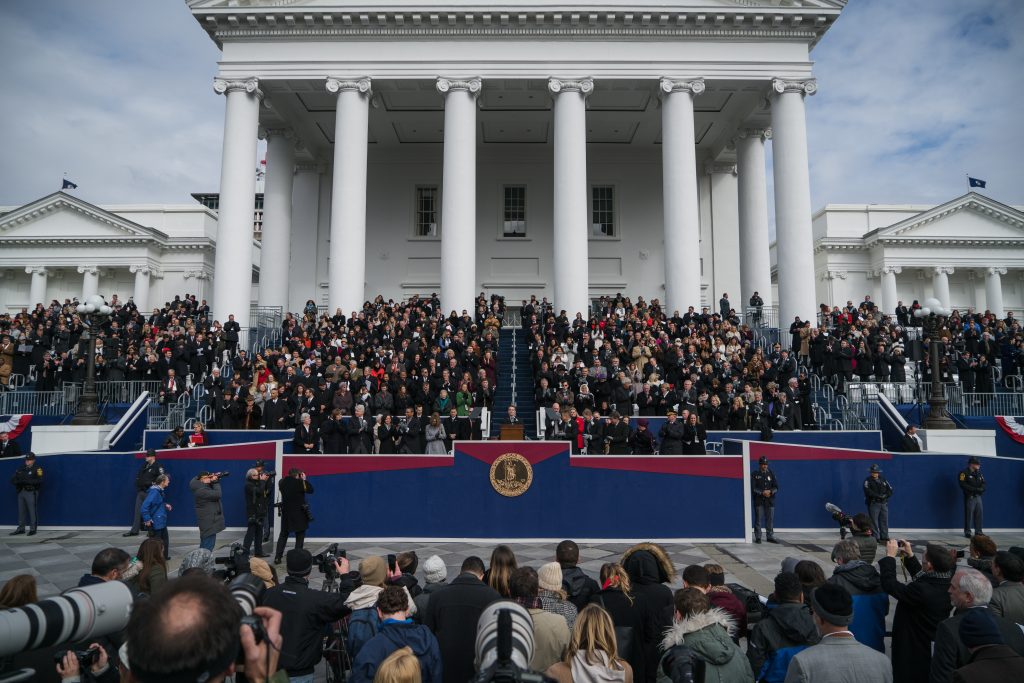 Ralph S. Northam was sworn in as the 73rd governor of Virginia just as the sun broke from an overcast sky on Saturday at the state Capitol.

Northam promised to work for all Virginians, invoking the Virginia Way stump speech he used throughout the campaign, and provided a clear rebuke to the divisive Trumpian worldview his GOP opponent Ed Gillespie adopted late in the campaign.

The governor, who attended Virginia Military Institute, opened his inaugural address by thanking veterans for their service and praising the peaceful transition of power before invoking the complex legacy of Virginia. “Our first governor understood liberty,” he said, referencing Patrick Henry’s “Give Me Liberty Or Give Me Death” speech, but he noted that just beneath the church where Henry made his declaration was one of the largest slave markets in the nation.

“Our history has been good and bad,” he said. “We understand that and we move forward. That’s the Virginia Way.”

After thanking outgoing governor Terry McAuliffe and praising his work, the new governor told stories from his childhood on the Eastern Shore, highlighting the values he said he learned from his mother and father: honesty, humility, and a lifetime of service to others, before quoting the VMI honor code.

“‘A Cadet will not lie, cheat, steal, nor tolerate those who do.’ Virginia and this country need that now more than ever,” he said, drawing heavy applause. He would return to the theme of truthfulness and lies throughout his address.

Northam outlined a slate of policy goals including medicaid expansion, insurance for all, blue collar economic development, addressing opioids, and tightening the permit process to reduce gun violence. “It’s easier to get a gun than it is to rent a car,” he said.

Near the end of the speech, he also addressed discrimination, public school infrastructure, clean air and water, and rural poverty, before closing remarks. “This country is once again looking to Virginia to lead the way,” he said, referencing the national focus on Virginia as Democrats and Republicans prepare for November elections.

Lt. Gov. Justin Fairfax and Attorney General Mark Herring were also sworn in, providing for a second term of Democratic control in a commonwealth that tilted red for more than 20 years. Other attendees included Senators Mark Warner and Tim Kaine, members of Congress, and every living former governor.

The ceremony was heavy on gospel music and diversity, starting with the opening performance of “America the Beautiful” sung by Larry Bland and the Volunteer Choir, a nationally-known gospel group formed out of the civil rights movement, to a blessing of the ground by representatives of Virginia’s Native American tribes with a traditional ceremony.

The inaugural committee also invited the Boy and Girl Scouts from the All Dulles Area Muslim Society Center to lead the Pledge of Allegiance and had a benediction by Rabbi Michael Knopf of Temple Beth-El, Richmond. The groups and individuals chosen to participate reflected the theme of diversity and inclusiveness Northam focused his speech on.

Some 4,000 were in attendance at the ceremony, which ended with a parade led by members of the National Guard, followed by the Virginia Military Institute Corps of Cadets. Other military-affiliated parade participants included Semper K9 and the assistance dogs they train for veterans, but other groups highlighted different aspects of the state. Pro-LGBT groups like Equality Virginia and Hampton Roads Pride marched together, while universities like James Madison University fielded marching bands, and the University of Virginia Chinese Lions dance troupe represented their schools.

Employees of NASA represented the organization in astronaut garb and with model rockets, followed by Deborah Pratt, an 8-time state oyster shucker champion, before the Chesapeake Bay Foundation, a group that advocates for clean water in the bay.

Other clean water advocates were on the sidewalk, protesting recent pipeline projects. Their chant, “Water is life”, could be heard from the group assembled on N. 9th Street during a quiet lull before the ceremony began, . Reached after the ceremony, Tom Burkett of the Virginia Water Healers spoke about the protest he organized. “Our big ask is for Northam to be a little more vocal on protecting our water.”

The 20 or so protesters came to share their concerns around pipelines and water clean-up, specifically citing the dangers of horizontal drilling through the James River as part of the Atlantic Coast Pipeline. “[Lt. Gov.] Fairfax stands against the pipelines and we hope Northam will too, but it’s time to show he’s serious.”

Dream Act supporters from United We Dream were also present outside, wearing brightly-colored orange hats, protesting the deportations of young people brought to this country without paperwork. Among them was Sophin Sok and her cousin Samantha Oeur, who attended to tell people about Sok’s fiance, a young man who was brought here from Cambodia as a 1 year old and recently detained because of a minor arrest a decade ago.

“He served his time,” Ouer said. “He was working, he has four children, he just wants to stay here and raise them. Why should he have to go to a country he left as a baby?”

Inside the mansion, Northam signed three executive orders, the first prohibiting discrimination in state employment on the basis of sexual orientation or gender identity, the second enumerating the powers and responsibilities of his chief of staff Clark Mercer, and the third empowering him to declare a state of emergency.

The first act continued the one signed by McAuliffe, which restored protections first established by Governor Warner in 2005, continued by Governor Kaine, and lapsed under Governor McDonnell. On hand to accept the pen was James Parrish of Equality Virginia, a statewide organization that seeks equality for LGBT Virginians.

Carlton Webb of A Society Without A Name, a group that helps the homeless with self-advocacy, was one of the many progressives in attendance to see the swearing in. Despite the recent cold and the heating crisis, he was optimistic about the new governor and newly elected Democrats. “We have an opportunity for change with the new legislature. This is the year we’re going to make a change.”