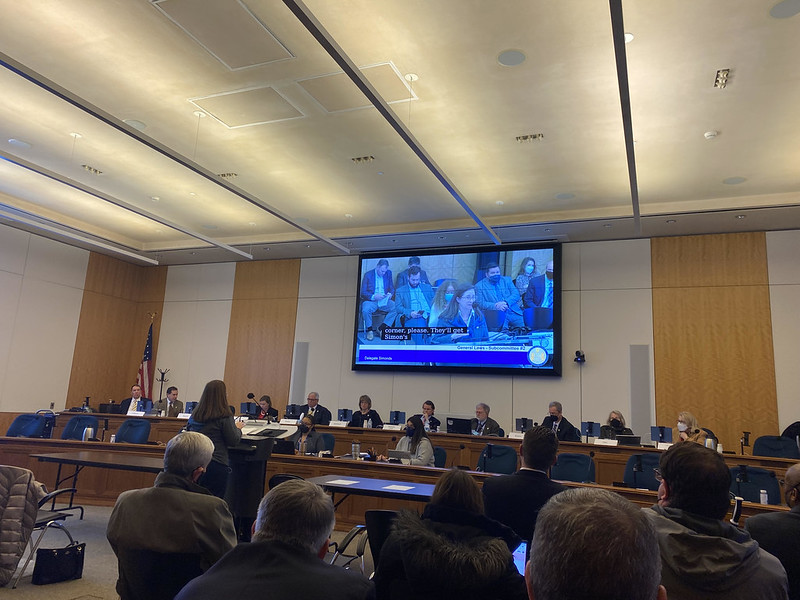 Sex trafficking survivors can drop in at the Washington, D.C.-area center to hang out with animals, bake bread and create art.

“Therapy animals can be helpful; finding volunteering passions that aren’t triggering and spending time in nature are different things that can be healing outside of therapy,” according to Elizabeth Bowman, executive director and founder of the Restoring Ivy Collective.

Bowman said she was recruited into sex trafficking work when she was 17. She’s part of a group of advocates and lawmakers working to help human trafficking victims in the region. Bowman uses her doctorate in social service throughout her work.

Though local, state and regional efforts have ramped up in recent years, data from the National Human Trafficking Hotline in Virginia show human trafficking is a consistent issue in the state. The hotline helps human trafficking victims and fields tips about potential sex trafficking situations.

More than 800 human trafficking cases were reported in the commonwealth from 2016-2020, although the number of cases decreased by 37% from 2019 to 2020, when the COVID-19 pandemic hit. Numbers are not available for 2021. Statistics on human trafficking are underreported because it is considered a hidden crime, according to advocates fighting to end human trafficking.

Human trafficking takes place when someone forces, frauds, or coerces another person into labor or commercial sex activity, the Department of Homeland Security states. The crime primarily impacts women, according to the United Nations, although men are also victims.

There have been at least 1,546 human trafficking cases in the state since 2007, data show. The hotline receives hundreds of calls and messages from Virginia each year and has fielded more than 6,000 contacts from people located in the commonwealth since 2007, according to its website.

There were some wins this session, according to Patrick McKenna, co-founder of Virginia Coalition Against Human Trafficking, but he stated there is still work that needs to be done.

Del. Shelly A. Simonds, D-Newport News, introduced HB 258. The bill will create an online training course for hotel staff to recognize human trafficking and report it. The legislation was set to become law in July, but the governor recommended delaying the bill’s effective date until 2023. Lawmakers will decide later this month whether to accept the governor’s recommendation.

However, McKenna was disappointed that lawmakers did not pass criminal record relief for victims and continued “to resist efforts to remove criminal sanctions against minors who are forced to commit crimes as part of their trafficking.”

Del. Kelly Convirs-Fowler, D-Virginia Beach, introduced HB 579, which would allow additional court records to be expunged for sex trafficking victims. The bill was left in a House committee. Current law only allows the expungement of these records for prostitution convictions and keeping, residing in, or frequenting a bawdy place.

“Sixty percent of survivors have felony records that are associated with theft or forced criminality,” McKenna said. “In order to be able to break the cycle for many of them, in and out of the jail system and such, we’ve got to deal with those criminal records.”

Other bills also didn’t get a green light from lawmakers. Del. Paul Krizek, D-Alexandria, introduced HB 755, to create the Anti-Human Trafficking and Survivor Trust Fund to support victims and fund services that prevent human trafficking. The bill was left in a House committee.

Education is part of the fight against trafficking

While lawmakers can change laws to combat human trafficking, doctors can help spot it. Dr. Fidelma Rigby leads a human trafficking elective for medical students at the Virginia Commonwealth University School of Medicine in Richmond.

The class helps students understand the scope of human trafficking and how to recognize the signs and report suspicions to authorities. Doctors must learn to identify victims of human trafficking, Rigby said. She added that 80% of victims in a trafficked situation come into contact with a medical professional.

“They don’t want to be in a waiting room where other people would have free access to them,” Rigby said.

Even things like the common clinical practice of putting the patient’s chart on the door before the doctor enters, that anyone can see, can be frightening for a victim, she said. Medical practices might also consider implementing longer clinic visits for human trafficking victims and having social workers meet on site with victims.

Rigby hopes VCU Health System employees will be required to undergo in-person training in the near future, as opposed to just an online course to help medical professionals better recognize human trafficking signs and learn how to approach victims.

The VCU School of Medicine and nonprofit ImPACT Virginia host an annual Medical Symposium on Human Trafficking, but attendance is not mandatory, according to Rigby.

In addition to educating medical professionals and the public on human trafficking, advocacy groups at the local, state and regional level are creating new partnerships to help end the problem.

The Regional Interdisciplinary Collaborative, with advocates from Delaware, Maryland, Pennsylvania, Virginia, West Virginia and the District of Columbia, had their first regional summit in 2021. Advocates and professionals discussed their work around human trafficking, according to Trish Danner, regional outreach specialist at the U.S. Department of Health and Human Services and partner of the regional group.

“I found two things that were happening in our region around human trafficking, is that there were a lot of initiatives in our region that needed to be duplicated and improved upon, and there was a lot of reinventing of the wheel,” Danner said.

For example, states creating medical guidelines around human trafficking could reach out for advice to other states which already have guidelines in place, Danner said.

The next summit will take place on Feb. 8 and 9, 2023. The group plans to host workshops year round in addition to presenting annually, according to Danner.

Attorneys who are willing to do pro bono services and have experience in family and criminal law are also needed to defend human trafficking victims, according to McKenna.

The Statewide Sex Trafficking Response coordinator released a report in December 2021 regarding the state’s strategy to combat human trafficking.

The General Assembly created in 2019 the coordinator position within the Virginia Department of Criminal Justice Services, to file annual reports and make legislative recommendations. Additional staff positions are needed to increase communication and assist local and regional efforts across the state, as well as funding for training programs, according to the report.

Organized efforts, education and resources can help prevent the number of future victims. But what survivors said they need is to be seen as more than the abuse they experienced.

It took Bowman a long time to share her story, she said. To combat human trafficking, people need a seat at the table, including survivors.

But survivors often get pigeonholed as “experience experts,” Bowman said, and they need to also be seen beyond that role.

“It’s not OK to say, ‘OK, you’re part of the team, but only tell us your trauma and shut up the rest of the time,’” Bowman said.