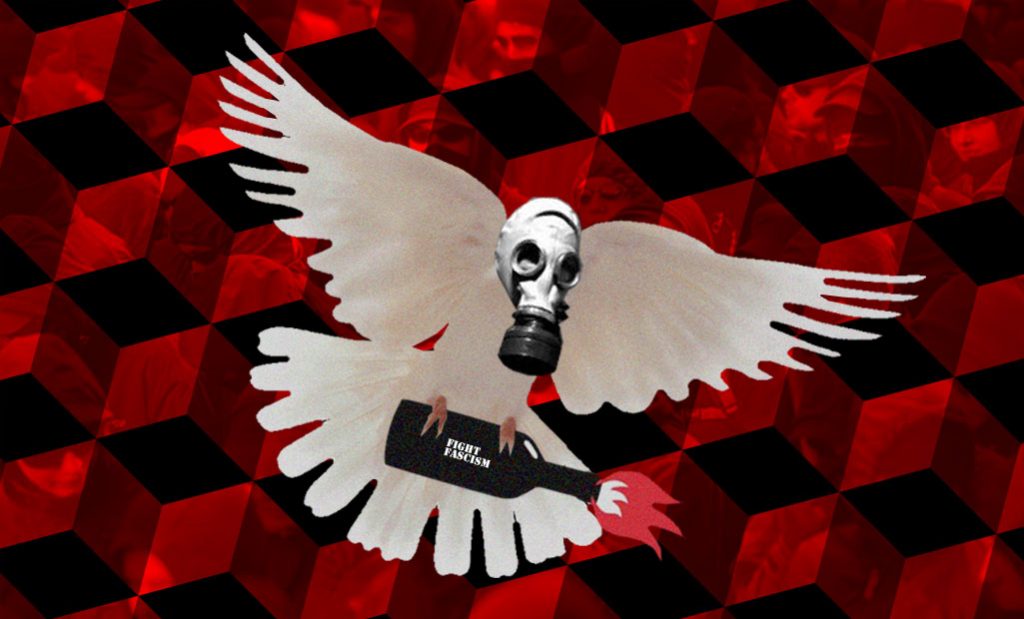 Now that Charlottesville is about to have its third white supremacy rally this summer, there has never been a time when anti-fascism is more necessary in Virginia. My most direct experience with this kind of organizing comes from my time with Occupy Wall Street in New York City. There are some lessons we can learn, and we’re already seeing some of the same narratives develop around anti-fascist counter protests.

The worst thing about Occupy was the media circus. Our public spaces were filled with bright, hopeful, engaged people who wanted to make things better, and had a lot of ideas about how to fix what’s broken in our country. Once the media descended, the decision to put someone on air wasn’t generally based on whether that person actually knew what they were talking about, whether they were particularly engaged in working for change, or even how active they were in their community. It was based on how bright their artificial hair coloring was, or how weird their clothing choices were.

The media wasn’t interested in discussing the politics or economics, because that takes work – they were there for the spectacle.

We see the same pattern developing now with discussions about anti-fascists. What the media learned during Occupy about black bloc tactics and the diversity of the disparate left seems to have been forgotten. To make things worse, in our post-facts age there’s a heavy dose of fake news mixed in with reporting of all kinds. It wouldn’t be a 2017 American political phenomenon without a heavy dose of complete bullshit.

As a result, anti-fascists have been accused of trying to tear down statues of Sam Houston, or desecrate confederate graves at Gettysburg. They’re accused of having secret training camps where they’re teaching young people to wage a civil war against conservatives, because they hate freedom or something similarly ridiculous. For the modern rabid conspiracy theorist, anti-fascists are that evil leftist force that lurks in the darkness, ready to pounce at any moment. Their plans, these theorists assume, are to murder conservatives, or burn churches, or vote for a black guy–basically anything that might undermine the supremacist agenda.

But if we’re going to discuss anti-fascism, we ought to be clear about the difference between the movement as a whole and the tactics that some anti-fascists choose to use.

What we see in the media – the hooded sweatshirts and masks – is more of a tactic than an organization or strategy. Anyone can throw on a black hoodie and ski-mask and call themselves Antifa, or black bloc, or Anonymous, or even Occupy for that matter. There’s no trademark or membership card. It’s a tactic used by a number of different groups. The fascists themselves have a long history of using similar organizing tactics in Europe. (Full disclosure: when I was part of the Occupy movement, I took an extremely dim view of black bloc tactics, though my view is evolving).

In contrast to the hoodies-and-masks imagery we’re shown stands the actual anti-fascist movement. Everyone from unions, anarchist associations, immigrant activist orgs, and even churches have participated in anti-fascist action. When church groups protest the Ku Klux Klan, they’re engaging in anti-fascism. At its most basic level, anti-fascism is what happens when groups of local activists come out and stand shoulder to shoulder with each other in solidarity against hate – as we have seen all summer in groups protesting white nationalism and supremacy in Charlottesville.

There’s an eternal debate in far-left politics about good protesters vs bad protesters, about whether the anti-fascist movement should accept diversity of tactics, about whether it’s our ethical duty as people who believe in a democratic society to face down fascists by all means necessary. That debate is unlikely to change any time soon.

While I have a pacifist tendency to my politics, I can’t say that the more aggressive tactics of anti-fascists  are necessarily wrong in today’s political climate. I do think that political violence is something to be avoided. Once violence is invited into politics, it takes decades to remove. The prospect of political violence in the US is especially terrifying because of our own dark history. From the guerrilla wars of reconstruction, to labor wars in the 1920s, to the terrorism of the Ku Klux Klan, to Jim Crow and lynching, to attacks on civil rights demonstrators, we are no strangers to violent politics.

But for the most part, that’s our history, not our present. What makes the specter of political violence more worrying for American civilians is our access to firearms. As private citizens, we own slightly more firearms than all of the militaries on the planet combined – including our own. That particular powderkeg is not one I’d like to see lit.

Nonetheless, the more radical anti-fascists would argue that fascism, once it takes root, requires extreme methods to remove. I’m not sure that the roots of fascism in America are strong enough to require a violent reaction, and I do genuinely worry about the consequences of political violence in the US. Some anti-fascists would argue that the fascists themselves have already brought violence into our politics with their words, actions, and threats. Yet even with that being true, I’m not so sure that this requires a violent response. But it certainly demands a response of some sort.

Where anti-fascists are correct, is this: Fascists do not engage in debate. The Left and the Right might argue over whether taxes should be raised, or whether roads should have tolls, and there’s room for debate over substantive policy differences. But there cannot be debate between the position of “college should be debt-free” and the position of “Jews and queers should go into ovens.” That’s not grounds for debate, that is grounds for total and absolute opposition.

Whether or not we agree with their politics, strategies, or tactics, one fact about anti-fascists remains: A bunch of motivated and organized groups are marching in the streets facing down white supremacists, while centrist liberals sit around in gastropubs sipping craft beer and criticizing them.

Agree or disagree with the aggressive tactics of the more radical anti-fascists, but they are using their bodies as shields to defend people of color, immigrants, the LGBTQ community, and other Americans who don’t look or act like them. If we disagree with their tactics, then we need to be the ones to show up and lead by example.

This makes our choice pretty simple: show up, or shut up.

Will McLeod is a journalist and activist living in Washington, D.C. He began his career in independent media covering Occupy Wall Street in New York City, and later worked on covering the Scottish Independence Referendum in 2014. He has been active in British and American politics, both as a campaign worker and advisor. His weekly podcast, Hopping Mad, covers economics and politics, and can be found at ImHoppingMad.com. He is on twitter as @WillMcLeod99.

Top posts by Will McLeod