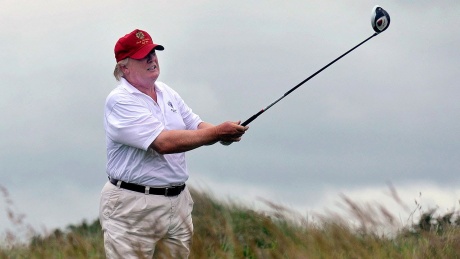 Despite promising to take no vacations during his presidency, Trump had spent 31% of his time as president playing golf at his resort in Mar-a-Lago, FL, to a tune of about $3 million each in tax payer funding. After releasing a budget calling for the elimination of funds to clean up the bay ($73 million last year) Virginia’s state Democratic Party Chair, Susan Swecker, has come up with an idea.

She suggested, via press release sent out this AM, that Trump stop taking vacations as he promised he would, and instead funnel that money – spent on jet fuel, security, etc – into helping maintain the gains the Bay has seen.

“He will have cost working people more than $100 million by the end of the year simply to fund his vacations,” Swecker said, pointing to the monthly cost of about 10$ million so far. “Simply put, if Donald Trump postponed his Florida vacations until September, he could save the Chesapeake Bay.”

Now it’ll probably take more than one year’s funding to save the bay, but do we really want to know what our beloved watershed will look like a year after its funding has been cut entirely?

“We’ve seen from Trump a denial of any kind of environmental consequences… and boy oh boy, on this budget, did he go after the environment… we all value the Chesapeake Bay… and under Democrats and Republicans alike, we’ve worked together to clean up the bay,” he said, calling it one of the Commonwealth’s treasures while pointing out Trump is the first president to suggest cutting all funding to support it. “[With this proposed budget] my hope is Democrats and Republicans will come tother and come up with something that holds the deficit down, but does so in a reasonable way.”