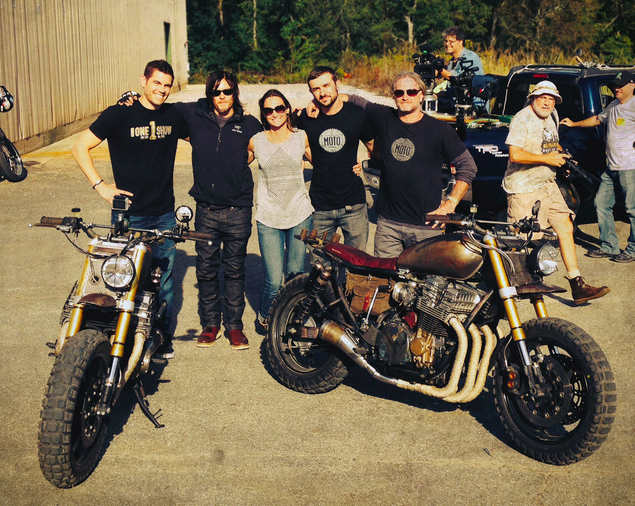 A “secret’ down-town RVA motorcycle company/chop shop is behind the new set of wheels Daryl from the ‘Walking Dead’ sports this year.

A “secret’ down-town RVA motorcycle company/chop shop is behind the new set of wheels Daryl from the ‘Walking Dead’ sports this year.

In the show, Daryl (Norman Reedus) escapes to a new town and stumbles upon a collection of parts in an old chop shop- “a man with no horse,” as Reddhus explains it in a video as part of AMC’s push for digital content.

“Despite us being a bit star-struck we managed to pull ourselves together and deliver a gnarly Classified XV920R,” said Classified Moto’s Founder, John Ryland in a statement. He said the entire process started with an email from Reedus and a request to build a different, personal bike for the actor.

Ryland said he worked closesly with Reedus in the first bikes production, and Reedus was so please, he reached out when the zombie-show’s plot line called for a new “Frankenstein” set of wheels.

“Once the overall design was approved, we worked closely with two guys whose names we see in the opening credits every week — Tom Luse (Executive Producer) and John Sanders (Prop Master),” said Ryland. “Very calmly, Tom kept the ball rolling and got us answers to our 50 million rookie questions throughout the build. John gave us specific input on what would be demanded of the bikes during shooting.”

The bike(s, there’s two identical copies) is in fact made up of different bikes from different eras, something classified has become known for.

Check out the final product below:

Ryland got laid off from a local advertising gig in 2011, and Classified Moto is the result of him saying “fuck it”(paraphrased) and turning building motorcycles in his garage into a full time job.

It was 2011, so CNN made a video which really dug into Rylan’s social media strategy behind the new business. It’s pretty impressive.

Keep up with Classified Moto here.