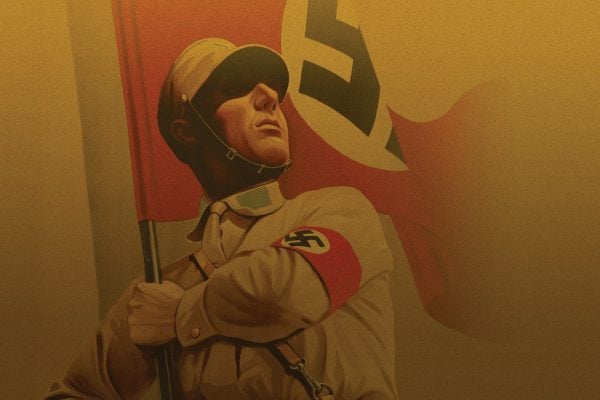 With “State Of Deception,” the Virginia Holocaust Museum offers an unflinching look at the ways propaganda can influence an unwary populace into supporting atrocity.

The Virginia Holocaust Museum of Richmond Virginia has welcomed a groundbreaking new exhibit into its halls, presenting its guests with “State of Deception,” which opened on May 1. “State of Deception” fulfills the museum’s goal of educating visitors and providing a comprehensive look at the Holocaust and events leading up to it.

In order to host “State of Deception,” the Virginia Holocaust Museum worked closely with the United States Holocaust Memorial Museum. The exhibit, which was originally a temporary exhibit at USHMM, became a traveling exhibit around 10 years ago. According to the USHMM’s website, “The Museum’s traveling exhibitions have appeared in 195 US cities and 49 US states, and in Canada, Croatia, Germany, Hungary, Israel, and Serbia.”

In addition to the Virginia Holocaust Museum’s Core Exhibits, which are permanently housed on its first floor and chronologically progress through the events of the Holocaust, the museum also presents traveling exhibits on its spacious second floor. “State Of Deception” is the latest traveling exhibit to appear there, and will be replaced on July 26 with “Holocaust By Bullets,” an exhibit that uses eyewitness testimonies and photographs to showcase the atrocities committed against Jews and Roma throughout Eastern Europe by Nazi mobile killing units.

Early in his political career, Hitler famously wrote that “propaganda is a truly terrible weapon in the hands of an expert.” As depressing as it is to contemplate, Hitler proved over the next couple of decades to be a bold, sophisticated innovator in the field of propaganda. His administration and the Nazi party did this by villainizing minorities, weaponizing fear of marginalized groups, and creating distrust of the adminstration’s enemies. “State Of Deception” focuses on how the Nazis’ use of propaganda built public support for their radical views.

According to Tim Hensley, the Director of Collections at the Virginia Holocaust Museum, “State of Deception” “talks about how a modern democracy gradually erodes into a dictatorship.”

As a whole, “State of Deception” studies the government use of propaganda to sway public opinion and garnish votes by inciting fear of enemies to the administration. But while some might feel that the government manipulation of media shown in this exhibit is parallel to events happening in our current political environment, Hensley disagrees.

“It’s really difficult to talk about those two things because the subject is so complex,” Hensley said. “It’s important to keep in mind that when we talk about messaging during politics, it’s not the same as what was happening within Nazi Germany. In Nazi Germany the government controlled the media. So you are really looking at a very different time and environment for those types of things.”

However, regardless of our current political environment, “State Of Deception” does encourage us all to be conscious in our consumption of media, to be aware of what sort of ideas are being presented to us, and to look beyond the easy answers to find the truth.

“State of Deception” will be on display at the Virginia Holocaust Museum until Sunday, July 14. The museum is located at 2000 East Cary St in Shockoe Bottom, and is open from 9 AM to 5 PM Monday through Friday, and 11 AM to 5 PM on weekends. Admission is free and open to the public. For more info, visit their website at vaholocaust.org.

Abigail Buchholz is a political science major at the University of Mary Washington. At school Abigail acts as News Editor for her school's newspaper. In her free time she enjoys traveling, the beach, and reading Stephen King.