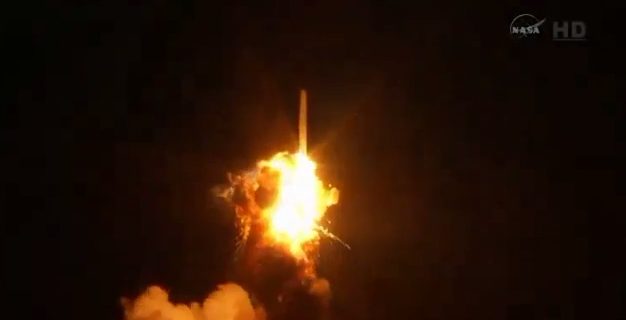 It looks like this rocket launch just can’t get a break.

It looks like this rocket launch just can’t get a break. Yesterday’s Antares rocket launch from a VA Eastern Shore launch pad ended terribly about 6 seconds after launch.

have a look at the video below:

Private enterprise Orbital Science Corp had been contracted by NASA to deliver supplies to the International Space Station.

Calling rocket science a ‘tough business,’ NASA Administrator Bill Gerstenmaier told CNN conditions should have been perfect. “Tonight’s events really show the difficulty that it takes for us to do this task of delivering cargo to the space station.”

No one knows what happened yet, but Orbital’s Advanced Programs Group was responsible for the $200 million project.

Orbital, the FAA, and NASA will lead the investigation into what went wrong.

For those of you who didn’t catch the rocket launch from VA’s Eastern Shore yesterday, the good news is you’ve got a second chance to see it tonight.

It appears a boat sailed in too close to the launch pad and yesterday’s launch was delayed. But the private company behind the launch has rescheduled. You can catch the event (which will be visible from most of the east coast) tonight at 6:22 PM.

So take a look up and to the east around 6:20 tonight and catch a great show.

A rocket will be launching from Virginia tonight–and if you’re looking in the right direction around 6:45 PM, you should be able to get a glimpse of the action yourself.

Here’s the deal: Orbital Sciences Corp will be launching one of their Antares rockets from the Mid-Atlantic Regional Spaceport in Wallops Island, VA. Side note: yes, there is a place in Virginia called the Mid-Atlantic Regional Spaceport. However, it’s not all that easy to stop by for a visit–it’s all the way over on the Eastern Shore, just about as far northeast as you can get on the Eastern Shore without drifting over the state line into Maryland.

You’ll be able to see the action going down over there from right here in Richmond tonight, though. When the launch happens at 6:45 PM, the rocket should be visible during its first stage engine burn everywhere from Massachusetts to South Carolina, weather permitting. Here in Richmond, we’ll actually have a pretty good angle on the whole thing, with the rocket reaching maximum visibility in the east-northeast sky around 90 seconds after its 6:45 launch time. It should remain visible in the night sky for several minutes, proceeding in an arc that will take it at least 20 degrees above the horizon locally, if I’m reading the visibility maps on Space.com correctly. Take a look for yourself here.

The rocket launching tonight is a delivery vehicle that will take Orbital’s Cygnus spacecraft out of the atmosphere and send it on its way to the International Space Station, where it’ll deliver a 5,000 lb load of supplies on November 2–assuming all goes well. The rocket is propelled by kerosene and liquid oxygen, and will drop its first stage backwards into the Atlantic Ocean after 4 minutes. The second stage will send the Cygnus on its way after just under 10 minutes, then will continue out into space. There’s a lot more detail about all of this science-y stuff at Space.com, and those interested should check out the full article.

For the rest of us, though, the best course of action is probably just to put on Black Sabbath’s “Into The Void” at 6:45 tonight, then wander out into the backyard and look east. “Rocket engines burning fuel so fast…” Awwww yeahhhh.

Watch a live stream of the launch beginning at 5:45 PM here.