This is apparently the last show Don Babylon will play as a local band, and I must admit that whenever I hear this sort of thing, I always worry. After all, this isn’t the 80s anymore. Moving out to LA to “make it big” isn’t nearly as sure a thing as it once was, and even back in the day it wasn’t all that guaranteed (ask Johnny Hott how it worked out for House Of Freaks, for example). Hopefully Don Babylon are just moving to Iowa to get master’s degrees or something. Regardless, they will be a big loss for the RVA alt-rock community, and they demonstrate that fact with aplomb on debut album Babe, co-released earlier this year by Trrrash Records. They’re leaving town initially to head out on tour in support of Babe, and I’m sure their high-energy rock show will win over plenty of new fans in new towns. Don’t forget us back here in Richmond, guys!

Don Babylon will be joined this night by out-of-towners The Lounge Act, who hail from New York and aren’t really a lounge act at all. They don’t sound all that inspired by the Nirvana song of the same name either, really, but these days you kind of have to figure Nirvana’s in every rock musician’s blood on some level, don’t you? Anyway, The Lounge Act should appeal to those who love Don Babylon in this town. Though they have a bit more mellow of an approach, they still have plenty of killer melodies, and know how to bring the rock when the time comes. The evening will begin with sets from Black Mold Jesus and 3-Legged Dog, a couple of the most evocatively named bands on the Richmond scene right now. Will their music live up to the mental pictures their names conjure up? Only one way to find out.

After nearly a year of playing together, local Richmond band 3 Legged Dog have released their first LP, What Goes On, an appealing offering of memorable pop rock songs, accompanied by deep, meaningful lyrics that seem so uncommon these days.

The tunes are crafted with thoughtful care, and while most are catchy and structured, they’re hardly predictable.

A four-piece band, 3 Legged Dog consists of Connor Wood (vocals/guitar), Andrew Touma (guitar), Josh Kline (bass) and Sam Athey (drums). The current lineup was cemented last October, when Touma was asked to assist the band in playing a Halloween cover show. The set went over so well that they decided to bring him into the band as a second guitarist.

What Goes On, which dropped in May, was recorded in less than five hours with Justin Black, of Crystal Pistol Records, in his riverside basement. Of note is the fact that the eight-track album was recorded on reel-to-reel analog tape, giving it a good sound despite the fact that it couldn’t be mastered. Some audiophiles contend that reel-to-reel is even higher quality than vinyl.

“It was an 8-track French analog reel-to-reel tape machine that we recorded on,” Wood said. “I believe it’s like a forty-minute reel tape we recorded on. It’s too sensitive for us to master it, which was kind of a pressing problem, but no record really has to be mastered.”

The third track on the album, “Battle Hyme for Lil Suzie”, is one of the standouts, a mid-tempo song about an attractive, not so stable girl named Suzie. One of the first things we learn about Lil Suzie is that she’s not above getting intimate with someone else’s man.

“I can see her in the restroom getting somebody else’s boyfriend undressed,” Wood sings to listeners near the beginning of the track. 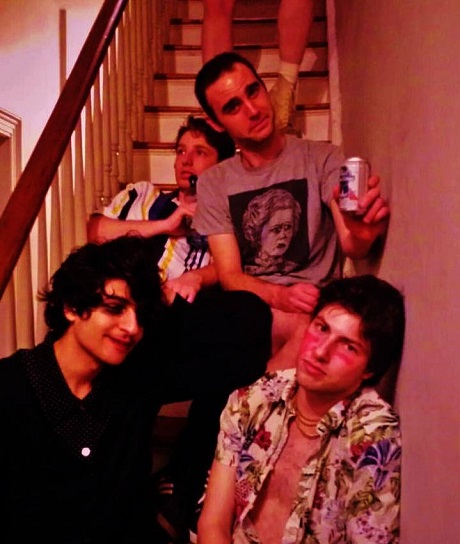 As the song goes on, you realize you might have encountered this very girl at a Richmond dive bar or house show. The song, a catchy pop-rock tune, paints us a picture of a girl who’s “gone mental, mental”. She’s the kind of girl whose pastimes include stealing wine from churches and “dancin’ in a Spanish mansion”, all the while taking a “million pills with a glass of water before she goes to bed”.

It’s one of the more straightforward tracks on the album, and it’s an excellent showcase of what Three Legged Dog’s debut consists of: good tunes that get stuck in your head, accompanied by lyrics that deserve to be dissected.

We find another standout in the album’s last track, “Holiday With Kiki”. It’s perfect music for lounging on the beach, getting some sun and day drinking irresponsibly. The music isn’t demanding – it’s easy to listen to and melodious, making it another track that’s liable to get trapped in your head – but the real beauty shines in the lyrics.

Whereas “Battle Hyme for Lil Suzie” was more frank, the lyrics for “Holiday With Kiki” are very open to interpretation, allowing your imagination to take hold.

“Oh, cold Italian pizza, greasin’ Mona Lisa, come on carmencita, renew my visa,” Wood sings dreamily, almost sleepily, sounding like he might have overindulged on the rum and gotten too much sun.

But what’s he really singing about in this song? Are we studying abroad in Italy? Working as a lifeguard at the nude beach and sneaking sips from our flask? Whatever it is, the themes of summer and hedonism are in abundance on this track.

“The pavement’s barefoot on my shoes, I’m lost without a margarita, wanna stay and sleaze in Costa Rica, baby won’tcha renew my visa,” lulls Wood.

The images he evokes through his lyrics are ample fuel for letting you imagine your own sleazy summer, wonderfully set to this song.

Overall, What Goes On is a great debut by 3 Legged Dog, but it doesn’t fully capture the energy of the band’s live performances, something they’ve become known for. It’s the reason their shows are so electrifying, and maybe it’s for the best that it isn’t captured here.

Sometimes, you just have to go out and see a band to get the full experience. Tracks like “Hidden Beatles Song” and “Battle Hyme for Lil Suzie” are fan favorites, and their faster track, “Cause I’m Blind” energizes the crowd.

“They thoroughly love to hear us play Lil Suzie or Hidden Beatles Song,” Touma said. “They all sing along to the choruses. Our friends who come to see us, or people who know us a little well around here, like to sing along to those two songs. “Cause I’m Blind” gets people riled up- that’s because it’s a very fast paced and rockin’ song, at least when performed live.”

The album is definitely worth a listen, but do yourself a favor and hear the tracks live as well. Catch 3 Legged Dog’s next performance at En Su Boca (https://www.facebook.com/events/275242672852808/) on August 8th, where they’ll be playing with Partition, Marigold and NYC-based band HTML. Assuming they bring the energy they’ve become known for in their live performances, it’s sure to be thrilling.