Behind metal detectors, barricades, and an overwhelming police presence, student demonstrators opened their peaceful assembly by directly addressing the law enforcement presence. The demonstrators, who authorities decided to confine to a limited area and number of participants, unfurled a banner that read, “Last year they came w/ torches. This year they come w/ badges.”

The student demonstrators outfoxed the police by abandoning the staging grounds and marching to another part of the campus, a large, open field where representatives from a local Black Lives Matter chapter and others criticized the University of Virginia over funds raised for victims of Unite the Right which they say have not been disbursed.

Inexplicably, police in riot gear rushed in on the assembly, lining up in a crowd dispersal formation. The assembly of students sitting and standing on the grass, signs laying on the lawn, was briefly declared unlawful and ordered to end. As riot police pressed in, students came forward, chanting “Why are you in riot gear? We don’t see no riot here.”

A coalition of clergy and faith leaders, working with the students, along with Charlottesville city councilman Wes Bellamy and others, de-escalated the police response. As riot police stood down, students marched over to Lambeth Field, where they continued the speeches while Virginia State Police filed in behind them, without the riot gear, forming a wall between the students and the temporary police barracks in the university dorms.

The otherwise peaceful evening would end with a scuffle on the street, when an officer had to be pulled away by his colleagues from a woman who witnesses said he’d shoved to the ground.

Some of the best photos of the evening can be found below: 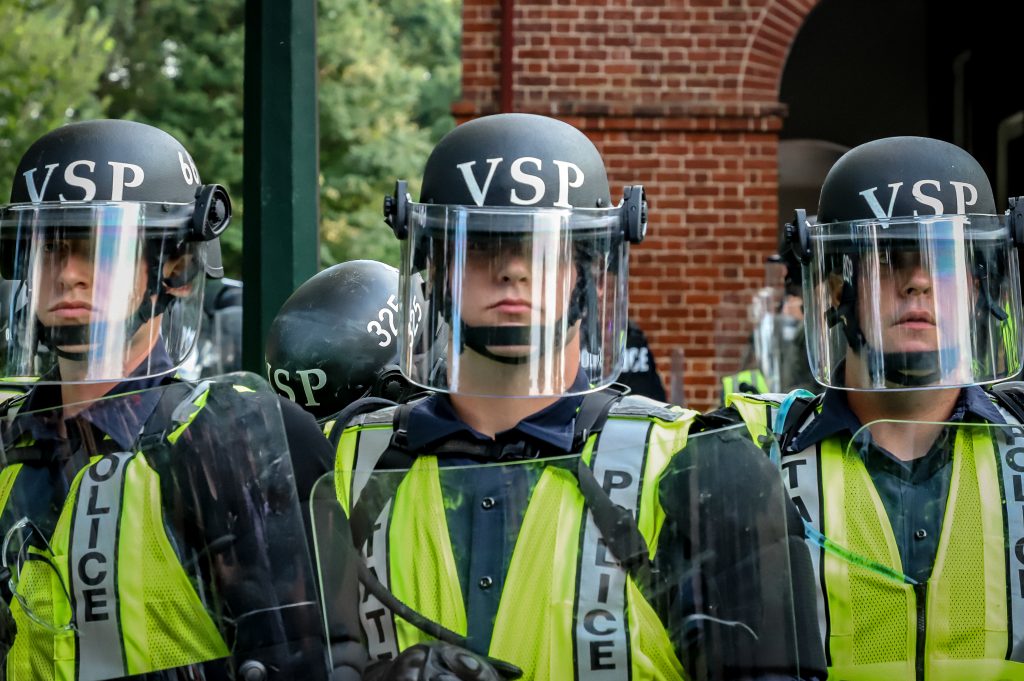 All photos by Landon Shroder. John Donegan contributed to this report.