He stood in an alley on the south side of Chicago, smoking a joint. His parents didn’t know where he was, or if they did, they were most likely too busy working to be concerned. The child of Italian immigrants, most days he was left on his own while they worked to ensure their future in America. He was 14.

A man approached him, a stranger with a shaved head. The man pulled the joint from his mouth, looked him in the eyes and said, “That’s what the communists and the Jews want you to do, to keep you docile.”

He didn’t know what a communist was, or what Judaism was. But he knew he was alone, lonely, and purposeless. Joining a neo-Nazi Skinhead group was a way out — the only one he saw at the time.

“I hated black people — I didn’t know any,” said Christian Picciolini, the boy in the alley, now 45 and a former neo-Nazi. “I hated Jewish people — I never met one. I don’t think I met one until I was in my 20’s. And I blamed them for every problem in the world from when I was 14 to 22.”

Now Picciolini sits in a coffee shop in Richmond after speaking at the National Legislative Services and Security Administration. Having spent eight years terrorizing minorities and recruiting other vulnerable youth to his Skinhead group, Picciolini now dedicates his life to traveling the country and speaking out against hate. Through his nonprofit peace advocacy organization, Free Radicals Project, he has pulled over 200 people from the darkness he pulled himself from in 1995.

“I was angry,” he said. “I never felt like I ever found the three really important things that I think everybody looks for, and that’s a sense of identity, community, and purpose. I didn’t feel like I had a family. I didn’t know who I was. I was idealistic, but I never had an outlet to be passionate about anything. This guy was the first person to offer me a place.”

This misguided sense of belonging led Picciolini to put all his energy into the movement. He quickly rose to a position of leadership in his Skinhead group, staging sit-ins and white power protests at his high school. He even terrorized the employees of color at his school, including the school’s black custodian. His main focus was recruitment, which in the 90s meant writing loud, angry white power music. It worked. Suddenly, this lonely kid with few friends and no control felt powerful, and that power felt good.

“I got really intoxicated by it,” Picciolini said. “It sent me deeper in, because the more I got in, the more important I was. The interesting thing was I felt marginalized as a kid, and then I became part of this group that marginalized me further from society… It was like a drug. I was a drug addict. I knew it was killing me, but at the same time I did more and more of it to feel better. It’s really the same thing that drives people to groups like ISIS, or a cult, or a gang.”

He had opened a record store in Chicago, from which he sold his white power music. However, things were starting to change. There was always a small voice in his head, telling him something about this was wrong, but that voice grew to a cry when his family couldn’t condone his actions any longer.

“I got married at 19. We had our first kid at 19, second one at 21,” he explained. “I had this family. I had this challenge to my identity, community, and purpose. Was I a hate monger or a father? Was my community the one I had surrounded myself with to boost my ego, or was it the one I had given life to? It challenged me, but I was still too afraid. It was everything I had known for seven years at that point. I was too afraid to make the right choice, and my wife and kids left me.” 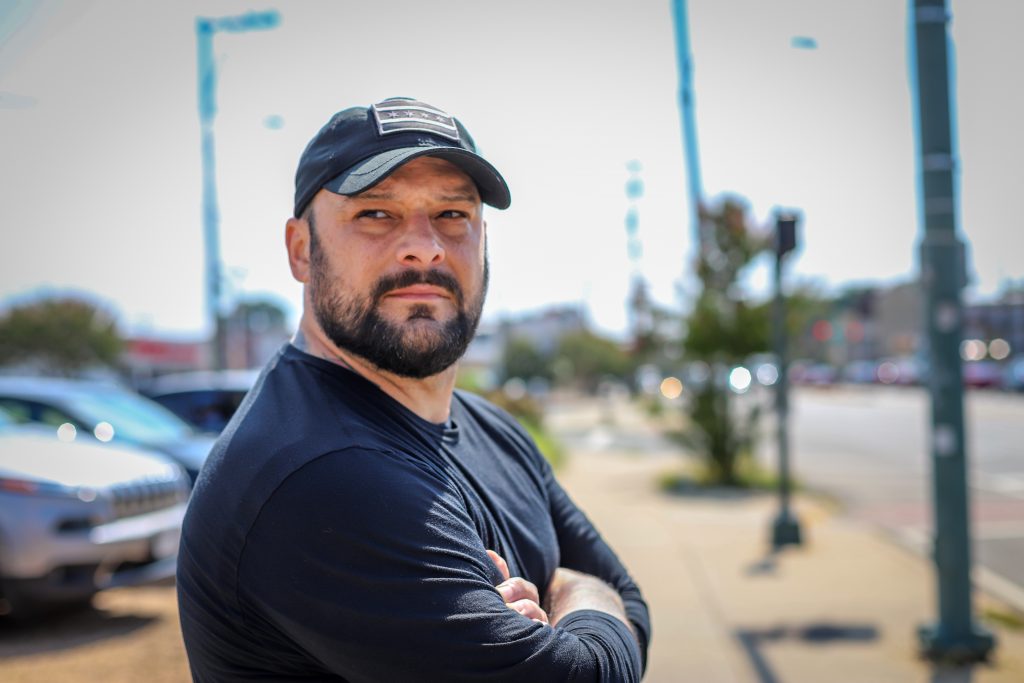 In the year afterwards, he continued to work in the record store. Although some customers were fellow Skinheads, many were regular people looking for hip-hop, rap, or rock music. His customers knew who he was, and who he associated himself with, but chose to reach out. Many of them were people of color, or people of different backgrounds and cultures.

“They didn’t break my windows. They didn’t slash my tires. They didn’t knock me out. They didn’t spray paint anything,” he said. “They came in to talk to me, even though it wasn’t their responsibility. I’m not saying people of color should go hug Nazis, but it was really their courage to say, ‘I’m not going to confront this man, I’m going to speak to him like a human being.’ Over time, I started to see them as more similar to me than the people I surrounded myself with.”

It was then Picciolini saw the value in things like different languages, cultures, food, music, and religion. The things that made him different from his customers also gave them something to talk about, and the very human aspect of these interactions forced him to realize that he could no longer justify his white nationalist politics. He stopped selling white power music, and since it brought in 75 percent of his revenue, he closed the store.

“It was the compassion that I received from [neighbors] at a time when I least deserved it, from the people I least deserved it from, that really destroyed the demonization and replaced it with humanization,” he said. “I couldn’t justify my prejudice, my racism. I felt too connected to them.”

Over the next five years, he tried to run from his past. He thought he could slowly fade away, blend into regular society without denouncing the movement. He moved, made new friends, and hoped the world would forget all about Skinhead Christian Picciolini. But even if they did, he couldn’t.

He returned to his old high school, hoping to rediscover himself in the place it began. He tried volunteering and being present for kids who might be in the same position he was nearly a decade ago. While he was there, he saw a familiar face, and followed his high school’s custodian to his car after seeing him leave the school. At first, the man felt threatened, but Picciolini stepped back and gave him a simple, teary, “I’m sorry.” They embraced, and Picciolini knew what needed to happen next.

Over the next 20 years, Picciolini began a new life of seeking redemption – not just for himself, but for anyone who had fallen into the sick, seductive trap of the white supremacist movement. He founded Life After Hate in 2010. When he’s not giving Ted Talks or speaking with college students, he’s traveling around the country meeting with neo-Nazis and white supremacists to show, not tell them why their hate is founded in fear and not reason.

“I always see the child, whether that person is six or 60, and not the monster,” Picciolini said.

One convert was a 16-year-old girl from Florida. After feeling lonely, she turned to online chat rooms and found an Internet boyfriend — or so she thought. Picciolini, who keeps tabs on white supremacist Internet trolls, discovered she was being catfished by two individuals: one in Union City, CA, and one in Moscow, Russia. The men had convinced her to send nude photos, then blackmailed her.

They coerced her into the white power movement, and she developed a deep hatred for Jewish people, denying the Holocaust. Rather than tell her she was wrong, Christian simply introduced her to a Holocaust survivor – a woman named Elsie, who was herself 16 when she was taken to Auschwitz. The woman sat with her for hours, and the young Floridian realized she had been shown fake online propaganda.

“The way that they’re recruiting people is going to these really safe zones online, like autism forums, depression forums, multiplayer games, kids playing with headsets,” Picciolini explained. “They’re recruiting people in those platforms because they know a lot of marginalized, vulnerable kids are there that may not have a lot of friends in real life, if they’re living with autism, or if they’re ‘weird,’ or whatever. So they go to these places and the Internet.”

“This is the fastest growing movement I’ve ever seen,” he continued. “I’ve never been more terrified than I am now, with the level and the amount of people that are getting sucked into this. Because it’s the same tactic that we came up with 30 years ago — and I feel very guilty about this — to normalize it. To mainstream it. It’s almost like mainlining a drug.”

Picciolini cites many reasons for the speed at which the white power movement now moves, among them countries electing officials like Donald Trump, as well as the concerted effort he sees from anti-democracy group agendas, like the fake news campaigns coming out of Russia.

“We knew that even American white racists were put off by swastika flags or saying ‘Jews’ and all that,” he said. “Now they’ve just traded that language off for ‘globalist,’ or the ‘global elite.’ That just means ‘evil Jew.’” Picciolini calls this a “dog whistle,” referring to the way innocent-sounding terms take on sinister hidden meaning for those involved in far-right politics.

“They also use other dog whistles,” he said. “Trump was just Tweeting South African farmer conspiracy theories that were started by the AWB (Afrikaner Resistance Movement), which was the neo-Nazi apartheid group. This was all garbage.”

Picciolini is particularly worried about this notion of normalization, as it allows for language and discussions to emerge from the white power movement that feel logical and are difficult to argue with, yet are founded in violence and ulterior motives.

The reliance of these movements on rhetoric doesn’t mean they won’t become physically violent. Just as Picciolini and his fellow Skinheads prepared for a race war in the 80s, white supremacists still prepare now. According to Picciolini, there are an estimated 100,000 people training in white supremacist paramilitary and militia camps around the country. Their best tactic is to hide in plain sight.

“I used to fool people with, ‘This is not white power, this is white pride. You should be proud of who you are. Don’t let anyone take that away from you.’ That’s hard to argue with,” Picciolini explained. “‘Free speech, I can say whatever I want.’ That’s hard to argue. They choose all these things, and they hide behind things that are very, very difficult to argue with without sounding hypocritical. That’s their intention. Their intention is to cause disruption and mayhem.”

While Picciolini is very concerned about the fate of our country, and the white supremacists who are suffocating it, he also sees many ways for us to stop this dangerous movement. One is having social media platforms take responsibility to keep their channels clean and clear of those who might incite violence. Picciolini recognizes the importance of free speech, but also knows social media companies are not government entities, and much like a landlord of an apartment building, it’s their responsibility to clean up the environment they control.

The most important piece of the puzzle is to prevent radicalization before it happens, beginning with children. Adults must learn to be more vulnerable with young people, so that young people may be vulnerable with adults, and forthcoming about their struggles. Ideology is not radicalizing – whatever causes kids to be angry is.

“I’m one piece in the puzzle,” Picciolini said. “I certainly cannot fix this. I can do a lot for interpersonal racism, but unless we fix systemic and institutional racism, it will always be a fertile ground for people to become extreme. The political and socio-economic situation in our country right now is the perfect breeding ground for extremism… The only thing I’ve ever seen break hate is being compassionate with people.”