All About You Tattoo Archives - RVA Mag

*This article was originally published on GayRVA. It comes from GayRVA’s Fall 2018 Pride Guide, released in conjunction with 2018′s VA PrideFest. Grab a copy of the print edition at your favorite shops around town, or check out the digital version here.

Though the storefront is innocuous enough, it says all you need to know: “TATTOO,” in old-school Americana lettering, jagged and bold. It’s the most eye-catching thing about this Midlothian Turnpike strip mall, the font reminiscent of Sailor Jerry era iconography – replete with dagger-pierced hearts and pin-up girls.

On the outside, it promises a predictable, grunge interior. Luckily, All About You Tattoo refuses to deliver. Instead, this LGBTQ-owned, all-female Richmond shop offers a harmonious marriage of traditional tattooing and a modern mentality. If the clean, crisp pale purple walls don’t tip you off, the fact that “Landslide” is playing full blast as I push through the door should do the trick. 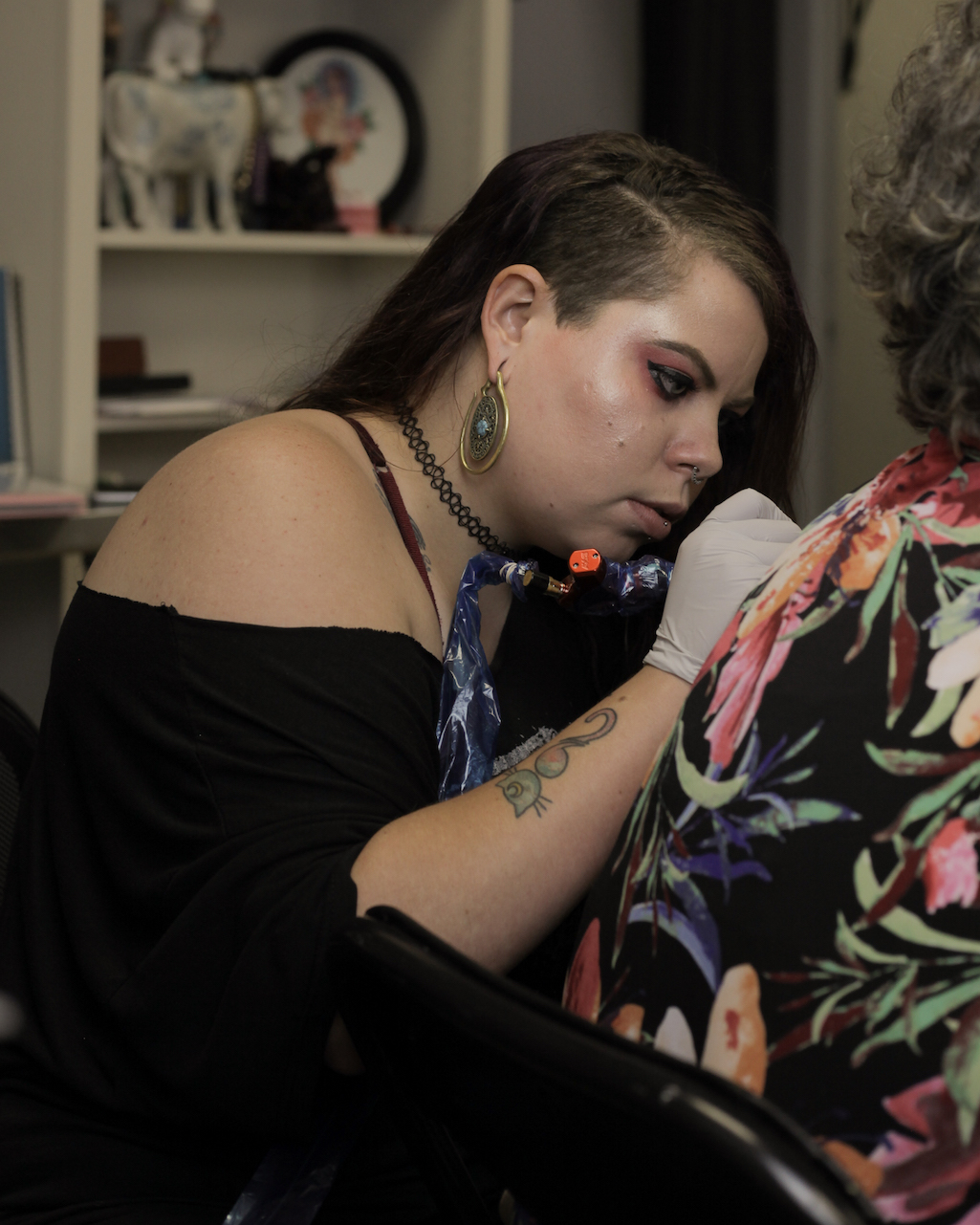 Shop owner Diana Burkholder is tattooing a father-daughter pair when I arrive. She’s wearing a black tee and clunky combat boots, and she greets me with a hug, though we’ve never met. There is an immediate ease to the interior, and Burkholder’s partner in business and life, Kim Blevins, explains to me that the atmosphere is more than intentional.

It’s open-concept and neat, the walls tastefully decorated, though much of the paint is bare. It’s designed so customers don’t get overwhelmed, explained Blevins, and they try to make all the work hung at the artists’ stations their own. It’s an instant, hanging resume, and Burkholder’s corner is crowded with striking photo-realistic black and white portraits. There’s a Pride poster just inside the door.

“It’s one of a kind,” said Raine Lanno, the other artist at the shop. “You come here, and you get treated like family. That’s what a service experience should be about.”

All About You Tattoo’s mission is to create a different kind of tattoo shop. They emphasize acceptance, striving to cater to a diverse clientele – be it age, race, ethnicity, sexual orientation, or gender. They’re changing the stereotypical view of tattoos, from the boy’s-club, conventional mentality, to a shop designed to be accessible to everyone.

“It was always my dream to give women a chance,” said Burkholder. “We found a place that we felt comfortable in. We created this.”

They’ll be at this year’s VA PrideFest to make this inclusion clear.

“Our community can walk in here and feel comfortable,” said Blevins. “They can be who they are.”

The day I visit, there’s five women on the floor – Burkholder and Lanno, the artists; Blevins, who helps handle the administrative side and keep the shop running; and two apprentices. Lanno is in the back corner under the glow of a softbox light, tattooing a strip of arabic script on a guest.

“I don’t care if you’re getting an infinity symbol or getting a whole sleeve, everybody gets the same amount of respect,” said Blevins. “People can feel comfortable getting their first tattoo or their millionth.”

The air is perfumed with the whir of rotary tattoo machines, and beyond the front counter is a seating area of plush leather furniture and low coffee tables. Burkholder said she designed it to feel like a living room – clean and comfortable. A lack of partitions allows for an easy banter that Lanno and Burkholder toss from station to station. Beyond a low barrier, past two squat, cement guardian lions, are a fleet of repurposed massage tables, bookended by rows of ink and equipment.

Burkholder started tattooing when she was young, but the environment was nearly impossible to break into as a woman. “I couldn’t get accepted. It was like every shop I went in I pretty much got laughed at because I was a girl,” said Burkholder. “It was so hard for me, so I wrote it off.”

She had to work unlicensed, illegally, just to prove herself. “You had to tattoo ten times better than a man just to get the same credit that he would.”

She grew up tattooing in biker shops, surrounded by a hyper-masculine environment, where every step forward was a struggle. Often, early tattoo shops were cemented in misogyny and exclusion; All About You has become the antithesis of those experiences.

“Here you don’t have to be compared. You work with all women, women are your boss. You never have to feel degraded,” said Lanno. “These aren’t just my bosses. These are my friends, my family.” 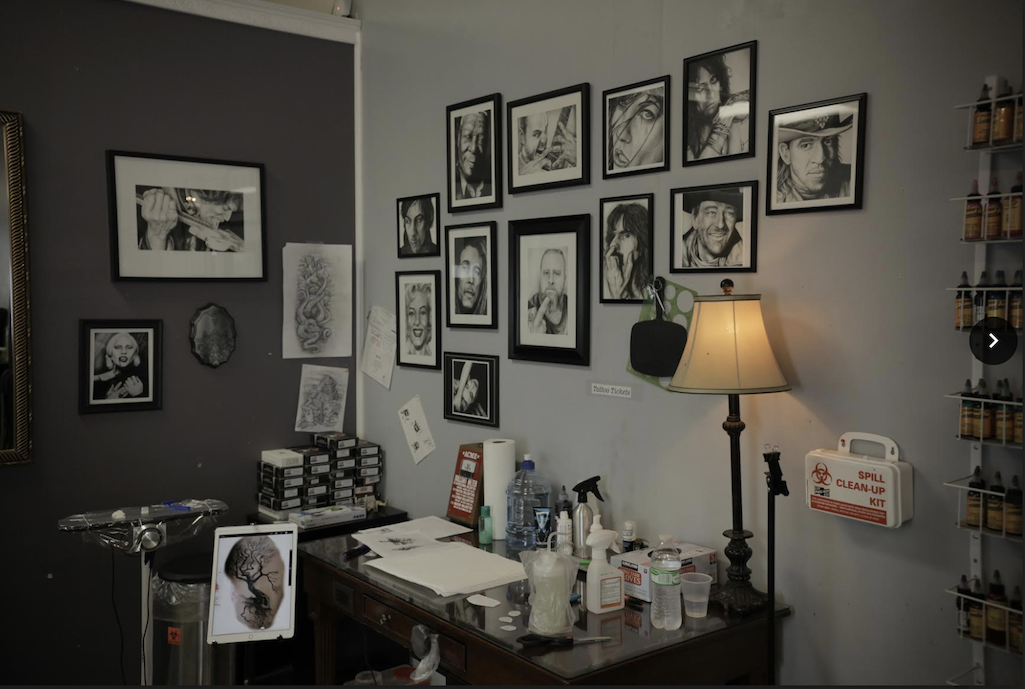 Lanno, 24, has been under Burkholder’s tutelage since she was 19 – “That’s the only thing I know.” Though she’s heard horror stories about apprentice experiences from other shops, she found comfort and home in Burkholder’s leadership.

“Diana sheltered me through my apprenticeship,” said Lanno, and Blevins interrupted: “She’s so young, she could be our child.”

The three of them tilt together on the couch, and Burkholder laughed. “She is our child.”

It’s a popular refrain in small businesses: that in this shop they’re so close, they’re actually family. But here at All About You, I actually believe it. They rib and bicker, poking fun and teasing, but I don’t know if I’ve ever seen three people so happy to be at work.

“If you spend all your time here, don’t you want to enjoy the people you’re around?” asked Burkholder.

Even Burkholder and Blevins, who work together all day, and live together all night, say they aren’t tired of each other.

“You never get on my nerves,” said Burkholder. And then they laughed, like it’s a little bit of a lie, but they still wouldn’t have it any other way.

It means something for guests to see a shop run by an openly lesbian couple. All About You brings in a lot of repeat customers; couples, families, and friends, alike.

“I can count on both hands how many families come in to get tattoos together,” said Lanno. 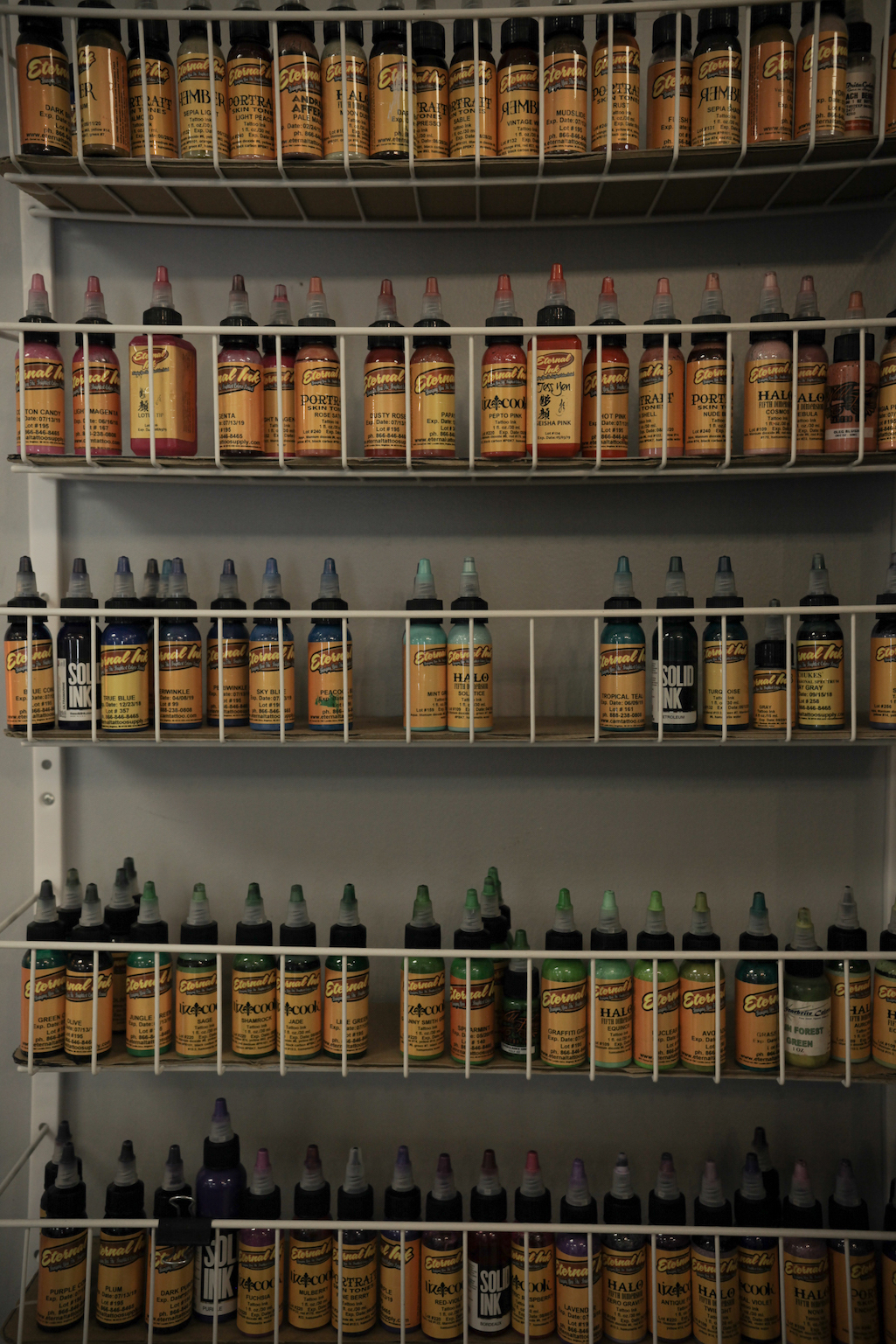 I myself walk in without a tattoo to my name, and any chance of getting one seems such a distant possibility, you couldn’t even see it if you squint. Call it a fear of commitment, or disappointing my Southern-raised father, but it’s never been on the menu. But no one at All About You minds.

Burkholder said it’s important that they never guilt people about their tattoos, no matter how big or small. “I don’t want people to judge me for having tattoos, so I’m not going to judge people for not having them,” said Burkholder. “I have a twin brother, and he doesn’t have a tattoo on him.”

The second day I visit the shop, there’s a woman, over 60, sitting in the shiny, black leather chair.  Lanno works away at her shoulder, tattooing a bee to replace a now-misshapen flower. Her son is in the opposite seat. It’s a family affair, one that targets the demographics that other shops may seek to exclude.

For Burkholder, her sexuality is a non-issue. She exudes confidence, and that in itself allows for a buoy of inherent comfort. “It’s hard to say that I’ve felt any kind of way about being gay in this industry,” said Burkholder. It’s as much a part of her as her ink, or her womanhood, and the power is in using that confidence to ease other people on their journey.

Burkholder and Lanno promise they can draw anything – “from girly to gore” – but the shop runs on a shameless and unabashed love for drawing women.

But regardless of style, it’s the people who matter the most.

“If you rely on the aesthetic of something, then you’re not looking at someone for real,” said Lanno. “Tattooing isn’t just about putting art on your body. It’s making sure that somebody comes in, and they feel comfortable, and they have an experience.”

All About You’s current location was a fresh start. It was an escape from the suffocation of the tattoo-norm, a chance to redefine their work and business by their own standards. They renovated the space, originally a convenience store, from the ground up – from repaneling the floor to the inner guts of the plumbing. “We did everything by ourselves,” said Burkholder. “All women built this motherfucker.”

It doesn’t take flowery prose to illustrate All About You’s legacy. The truth of it is written all over their bodies, like Blevins’ sleeve made up almost entirely of Burkholder’s original designs, or one of Lanno’s first tattoos, etched on the back of her calf. They are imprinted on each other and, in turn, their customers.

You can start small. A tattoo on the inside of your wrist. A quote on your forearm. That lower-back tramp stamp that everybody told you was a bad idea. The best part about ink is the idea of a forever – it’s as permanent as blood when it’s written on skin.

“The number one [goal] is teaching women to be confident about themselves,” said Burkholder. And I believe it, because she’s taken a world that by all accounts should be closed to me – with my obviously bare arms, my ignorance, and my non-edgy good intentions – and she’s made me feel welcome in a single evening, without ever putting a tattoo machine against my skin.

I walk out the same way I came in, tattooless. But, for the first time in my life – and don’t tell my dad – I’m thinking about it.