In 2012, the city officially designated the Broad Street corridor as the Arts and Cultural District of Richmond. However, there was one problem, it wasn’t actually overflowing with either. The city had monthly First Fridays, Gallery5, and other small exhibit pop ups of course, but when it came to larger-than-life works of art Richmonders and tourists alike could cruise or walk down the street and admire, the Broad Street corridor was severely lacking.

This was right around the time DC’s Art Whino curator Shane Pomajambo was putting on his annual G40 art summit, a large-scale art exhibit which always has a different theme. The theme for the year would have been “The Art of the Mural” and was going to be in DC, but RVA Mag founder Anthony Harris got word of it and called him about the possibility of bringing it to the city.

“He was the one that said, ‘hey why don’t you come you come down to Richmond and I did the next day. I met with him, and we ran into Scott Garnett, of the Downtown Neighborhood Association and we talked,” Pomajambo said.

Pomajambo knew the city had just named the corridor as the Arts District, but like many residents felt it could be taken to the next level.

“I said, ‘well it’s good you’re doing an Art District, but if I’m driving around your arts district, I would never know it’s an art district because I don’t see any art,” he said. “I told them I was doing murals and I said, ‘wouldn’t it be amazing if you drive by and see murals, then you would know you were in an arts district.”

Thus, the inaugural Richmond Mural Project was born with a lineup of 10 artists from all over the world painting murals in different parts of the city. And it was only supposed to be a 30-day pop-up, but after hearing feedback from the community, Pomajambo said he knew RMP was an idea that had legs.

“When I was asking people for permission to use the walls, everybody was telling me the same thing how Richmond rocks; the food, drinks…but they all wished they had more feet in the streets,” he said. “Nobody wanted to be next to empty storefronts and when I heard that story over and over a lightbulb went off.  We can make this the largest destination for mural lovers worldwide and that’s going to bring people to Richmond…”

The idea was to have murals spread throughout different areas of Richmond instead of concentrated in one central area.

“Within 15 minutes, you can drive from Shockoe Bottom to the VMFA and get all walks of life and I found that intriguing,” he said. “Nobody’s done it like that.”

It grew year after and year and by 2016, RMP had brought over 50 national and international artists hailing from Poland, to Australia, to Hawaii, California, New York, Switzerland, Singapore, Mexico, Berlin and more with a vast array of artistic styles to the city, helping to put RVA on the map for murals. Not only that, but it increased tourism, gained national exposure, and reached its goal of 100 murals in five years. And for many, that would be enough. But for Pomajambo, he had bigger plans.

“A lot of people think that’s the goal, that you do 100 murals and the project is over, but that’s not the case,” he said. The short term goal was to achieve the tipping point and establish the mural project as a destination.  You need to continue being relevant, and how you continue being relevant is by continuing to bring the who’s who of the art world.”

The who and where of the sixth installment of RMP has been very hush-hush up until now. There were even some rumors of it being on hiatus this year, but for the 2017 installment, Pomajambo decided to go a little bit of a different way with the project.

“This year we’re going to be doing a gigantic mural at the VCU Honors Building,” he said. “They are working on a rebranding campaign, and the mural was the perfect opportunity to help with that. I’ve been working with Tom Klug {associate vice president, university marketing} and he’s been amazing…”

Klug came to Pomajambo about five months ago about changing the image of the Honors College, located at 701 W. Grace St., and the RMP organizer was delighted at the opportunity.

“VCU changed Richmond, it’s a school town now and all the kids in the arts program that VCU has; so it’s really an honor to be associated and working with VCU because they’re such a big part of Richmond,” he said.

It also opened the door for RMP to expand its direction and brand.

“This is a perfect project for this year, this is why it’s not on hiatus because it’s now focus-centered, which means anybody calls me and they want it, I’ll go and help them with murals and change their branding or change their imaging or whatever it may be.”

The building is 10 stories high and RMP has recruited London abstract graffiti artist Remi Rough to tackle the job, which will begin this Thursday.

Rough has been an innovator in the art community for over 30 years as a writer and artist. He is a founding member of Agents of Change (AOC), an international artist’s collective, and part of the abstract graffiti movement ‘Graffuturism’ and his work has been featured everywhere from Morroco, to Paris, Toyko, Los Angeles, Miami,  to DC, and New York.

“It’s graffiti and futurism together, which is the style of that movement, and he’s more fine art, which is really cool,” he said.

When it comes to the annual artist lineup, Pomajambo strives to include a variety of different types of muralists and artists from illustrators, to those focused on subject matter, style, execution, and scale.

“There’s like 12 different things people focus on when they do murals so I tried to do a cross-section of what’s out there,” he said.

With bringing 10 or so artists each year, and with so many different murals completed around the city, narrowing it down to favorite moments was a tough task for the curator, but he ultimately landed on the Etam Cru mural,“Moonshine”, depicting a woman in a strawberry jam jar, located on the side of a building on 1011 W. Grace St.

“It’s one of the highlights because I brought them to the US for the first time and that mural won top three murals in the world from Buzzfeed,” he said. “The month after they came to Richmond, CNN did an article on them which was huge, and now they’re catapulted to stardom so as a curator, when you choose people who are not as well known, it’s very empowering. so for me, after that, I made a decision not to fully focus on well-known muralists and really bring the next big thing up to Richmond because I think its another level of excitement.”

The popularity that RMP would bring is something Pomajambo knew from the very beginning, but the offshoot of events cropping up from it was a benefit he said he never saw coming. And now, with that traffic and development, Pomajambo said another one of his long-term goals is to figure out how Richmond can capitalize on the impact.

“It’s been this incredible influx of people doing stuff around the murals; bike there’s been races, there’s been scavenger hunts, there’s been bus tours, bike tours, everything you could possibly imagine,” he said. “That’s really important, this allows people to empower themselves to develop economy, develop businesses out of the project. For me, that’s been very humbling and amazing.”

Still, even with it being a widely well-received event in the city, every year Pomajambo said they worked with the community to help RMP evolve and grow.

“I had people telling me, ‘what about the women and I was like, ‘oh you’re right, and the following year we had three women,” he said. “We had people that said, ‘what about the local muralists and after that, we had one in the lineup. Every year, the project has changed a little bit, which I think has been for the better.”

Pomajambo is looking at the VCU Honors Building project as a case study for future RMP ideas.

“The main thing I’m trying to push forward with the Richmond Mural Project now is, we don’t really need to focus on the Arts District as much anymore, and that’s why I’m calling the next long-term goal, a vehicle for change,” he said.

He hopes to go to certain areas like Church Hill, Manchester or Scott’s Addition to launch smaller-scale mural projects there.

“If people rally behind a specific area than we bring the Richmond Mural Project to that area. If anybody needs this kind of help, the mural project is there for them,” he said. 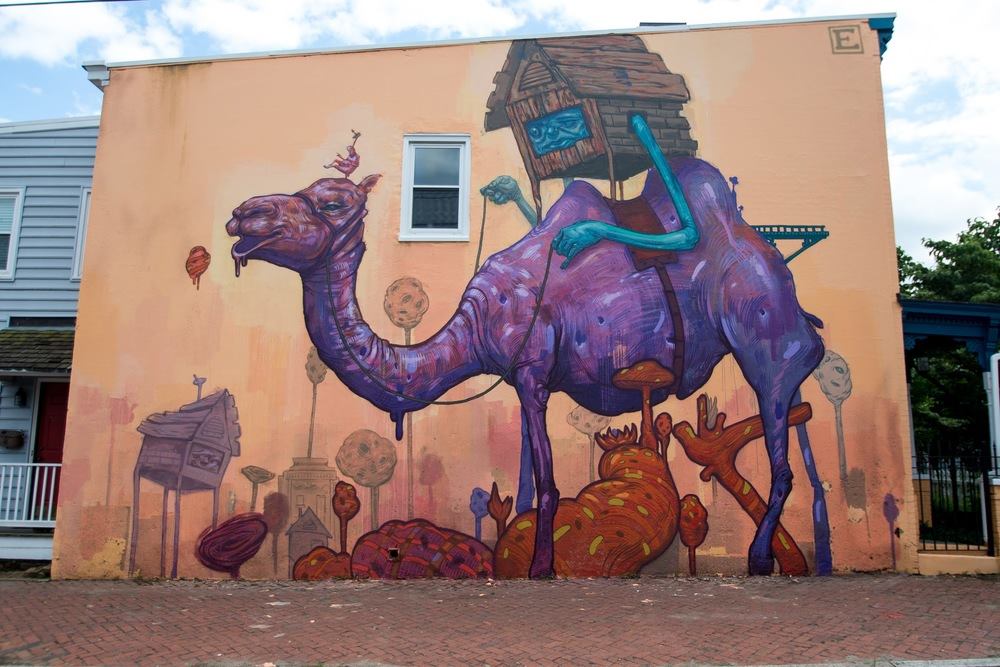 According to Pomajambo, he wasn’t able to connect with Mayor Levar Stoney and the city to lock down the full-scale RMP project for this year, but he said he hopes to work with him and the city for Richmond Mural Project 2018.

“The city supports it obviously, but if we can get some funding, some sponsorships, and support, we can grow the number back up to 10 because I think it’s important to continue doing a big push for 10 muralists every year,” he said.

You can follow Remi Rough’s work on his Instagram here. And be on the lookout for an RMP book slated to come out through Schiffer Publishing sometime in 2018.

Richmond’s bustling arts scene continues to develop and flourish with amazing painters, sculptors, musicians, designers, and artists of all kinds, but once a month RVA offers us a really great treat w
END_OF_DOCUMENT_TOKEN_TO_BE_REPLACED