This upcoming weekend is Beach Weekend, the unofficial “spring break” for nearly 40,000 mostly black college-aged visitors to the City of Virginia Beach (VB). For residents and visitors, it’s inextricably linked to Greekfest, which drew national attention in 1989 when the city declared it a riot and called in the National Guard after making the unusual decision to stop offering programming or activities for the black fraternity and sorority members. As a result, subsequent Beach Weekends have been set against a backdrop of racial tensions.

While all of the business leaders, elected officials, and community members RVA Mag reached agreed that crime and violence are an issue, there was clear disagreement on the severity and appropriateness of the city’s response. One local performer who often works the clubs during the event, DJ SDot, said that concerns over Beach Week have been blown out of proportion. “Every year I have DJ’ed for it I have never had a fight or an altercation,” he said, stating that other events, like city-sanctioned Crush Fest, also have high levels of public intoxication and corresponding arrests.

He said the primary difference between Crush Fest and Beach Weekend was race, adding, “it’s only when the kids look a certain way that the people get upset and boycott. As the local business owners call it, #escapebeachweek.

His comments about a racial divide were echoed by Louisa Strayhorn, the first black woman elected to Virginia Beach City Council and chair of a recent task force that reviewed the city’s response to Beach Week to issue recommendations to city council. She said critics of the event often fell back on racist language. “You’re hearing, ‘Those people are coming down to the beach, what are we going to do when those people come down here?’”

As part of her work reviewing the event, she looked into spring break events in Miami, Cancun, and other beach destinations, saying they were all pretty similar, with one exception, “the majority of the people at this [college event] are black.”

The fifteen-member task force included business owners, NAACP members, and local community leaders who issued a set of recommendations. In an official response, Dave Hansen, Virginia Beach city manager, accepted many of the recommendations but rejected others, some of which Strayhorn identified as the most critical. She pointed to three: Controlling traffic by temporarily reorganizing road directions along the oceanfront, providing programming and venues for visitors, and issuing welcoming proactive messaging.

For his part, Hansen felt positive about the current direction the city is taking, contrasting it favorably with what he described as a past failure. “I realized about 14 months into my job as manager that we’d defaulted our job to the police,” he said about previous years. Hansen went on to say that it shouldn’t solely fall on the shoulders of the police and that the burden needed to be shared across city government.

Community leaders disagreed with his assessment, pointing to a pamphlet issued by the Virginia Beach Police Department to beach residents highlighting departmental policies during the weekend. The issuance of the pamphlet is unique among high-traffic event weekends according to the critics, who also said the pamphlet was focused on criminality and punishment with a statement of zero tolerance for “disorderly conduct”, “illegal weapons”, and “crimes against persons.” Hansen didn’t see an issue, pointing to the pamphlet as being representative of a city he described as, “friendly, fair, and firm.” 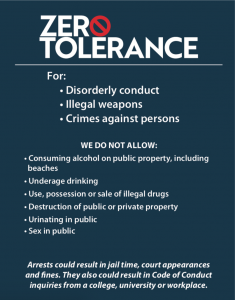 The pamphlet also contains warnings about drinking in public, something Hansen said would be a matter of “voluntary compliance”, not an instant arrest, adding, “some kids don’t know you can’t walk around Virginia Beach with a beer in your hand.”

Julie Hill, director of the communications office for Virginia Beach, clarified that there will be zero tolerance for violent crimes and property damage, but said that victimless crimes could be handled by police simply asking offenders to simply stop. “Getting compliance is the right course of action. Our officers do this year-round, we’re a resort community, they’re good at that. Whether it’s turning down music or not walking around with open containers.”

Strayhorn’s criticism also noted a lack of welcoming language for visitors, highlighting the pamphlet as mostly an attempt to comfort locals. She and another critic, city council candidate Aaron Rouse, both questioned why the city doesn’t issue similar pamphlets for other events.

Hansen praised Strayhorn’s work with the task force, but said some of the recommendations go beyond his authority, “because they involved spending public funds.” Hansen and Hill also pointed to serious disagreements between residents on the event, such as a petition that circulated last year gaining over 11,000 signatures calling for an end to Beach Weekend. Since the beaches are for the most part public, it is not possible to “ban” the event, something Hansen said he routinely addresses at public meetings.

When talking about the task-force’s recommendation of venues and programming, Hansen was openly dismissive. “Events end at 11 o’clock, what do you think those kids are doing after?” he asked. “The threat factor grows after 11 o’clock, so let’s be real about what the entertainment does for you.”

Rouse, a former NFL player and Virginia Tech alumni, disagreed, saying the programming just had to take into account the audience. “These are college kids, they’re young adults,” he said. “They’re going to stay up past 11 AM. You have to plan for that and give them something to do. When you’re 20, 30 years removed from that generation, you think differently. You need to invite young people to the conversation.”

He said the benefits of adding structure would also help the police, who he praised. “They do a great job, but when you’re talking about 40,000 people coming down here with nothing to do, you’re putting a burden on them. That’s asking too much of our men and women on the police force.”

“People don’t understand that you should be putting on some events to keep people busy so they aren’t just wandering the streets and getting drunk,” said Strayhorn, expanding on Rouse’s point and offering a response to some of the critics. “The opposition says, “Why should we reward them for bad behavior?” Well, because it’s your beach. You don’t want it destroyed, you have to do something.”

She said she wanted to be fair to the city leadership, but felt that they’d offered few concrete solutions beyond moving port-a-lets and placing more trash cans at the oceanfront, two of the solutions Hill highlighted in a section of the city website on Beach Weekend.

Hansen didn’t think his critics had a realistic understanding of the event. Speaking of previous Beach Weeks, Hansen said, “My community leadership was not there and they do not understand what was going on, so this year I am inviting all those that have an opinion about this event to come and get an understanding.” Rouse, SDot, and many others RVA Mag spoke to all said they’d been to Beach Week in the past many times.

According to Rouse and Strayhorn, racist messages on social media from some business owners and residents have also increased the tension. They thought the city had a responsibility to de-escalate the situation, yet when asked, Hansen ascribed the sentiments to fear on the part of residents.

One example is a Facebook post claiming, “Gearing up for College Beach Week. I’m ready are you?” followed by a photo of a handgun and ammunition clips with the hashtag #64rounds. Rouse said photos like this were disappointing for the community, “The perception that businesses are not welcoming to African-American college students, that’s real. All of us have a responsibility to really be the inclusive city we want Virginia Beach to be, to show our best side to the world.”

Rouse also said some businesses were embracing the weekend, but pointed to bars and restaurants shutting down for the weekend, as reported by WAVY TV. The closures recreate the situation in 1989 where attendees faced a shortage of activities, a problem highlighted by Dr. James Allen, President of the Interdenominational Ministers Conference, in  Strayhorn’s task force report. The report says the closures were “caused by the wrong signal we send by telling the youth that they can’t come to the Beach, by restricting their access and shutting down businesses.”

Facebook posts and the decisions by business owners are only part of the growing tension. Hansen recently expressed “regret” that local Christian ministers “were offended” after a text message thread he was on referred to civil rights marchers last year at the oceanfront as “five percenters,” a reference to a splinter group of the Nation of Islam. The ministers saw the text messages after a Freedom of Information request revealed a text message string between various city officials to the public in early April.

This was in addition to another racially insensitive comment made by Vice Mayor Louis Jones on April 21, who at an event called Taste of India asked the crowd, “Is there anybody here who doesn’t have the last name Patel?”

As the event begins, DJ SDot has his own picture of the weekend, an image he says he’ll never forget that best expresses the racial politics of the city. “One year there was a white male riding a skateboard around the Nubian college kids,” he recalled. “With a confederate flag tied around his neck, screaming out racial slurs. That will always be how I see beach weekend.”