For those of you hoping to find information on one of Richmond’s next sports bars, prepare to be disappointed. Sports Bar, the Richmond-based indie/pop-punk band, likes to undercut expectations as much as humanly possible.

RVA Mag met up with three of the band members last Friday afternoon at their prefered watering hole, Bamboo Cafe — which is the perfect place to meet a band whose bio states “I was going to shave my beard, but I took a nap instead.” Sitting across from the band, it was obvious that the decision to forego shaving had been made long ago.

Over several rounds of Richmond’s finest (PBR), the band entertained with their creation story. Spanning nine years, it is now culminating with the release of their first LP, Stranger In My Head, this Friday.

“We came up with the name of the album after writing the first track ‘Is It Strange?’ — which is about the voices in your head,” they said. Which was a great literal response.

Sports Bar is a take-it-as-it-comes squad. A perfect illustration is on their new album: When going to press, the LP ended up with an extra track that isn’t listed on the cover.

“Once the shrink wrap went on, we realized they had made a mistake,” they said. “It was too late to correct, so now it’s just a bonus song.” Also literal, also great.

Sports Bar can’t be bothered too much. If all else fails, they’ve got a backup plan.

“There’s always the possibility of us all quitting our jobs and starting a Taco Bell together,” the guys said, in a very serious manner.

While RVA’s first pop-punk Taco Bell joint is still on the backburner, Sports Bar is gifting the city their Stranger In My Head LP on October 12th. Recorded in Richmond by Montrose recording, it was pieced together by Stewart Meyers and Adrian Olson before being mastered by Dan Millici at Engine Room in New York City.

The band’s long-term members, including bassist/vocalist Kemper Blair and drummer/backup vocalist Stuart Holt, formed in 2009 with guitarist Cliff Boyd. Boyd played on the band’s first cassette, and also toured briefly before leaving the group to travel abroad. In 2011, Boyd was replaced by Brent Delventhal on lead guitar and Mark Miller on rhythm guitar. The lineup has remained the same ever since, and as a four-piece, the band has released several EP’s in addition to split 7″s and cassettes. The popular Richmond band has had the city long-awaiting an LP, and it’s finally here with Stranger In My Head. 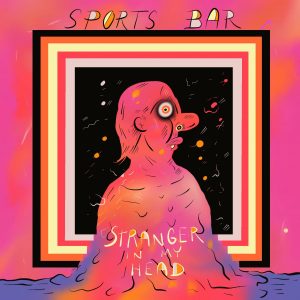 Beyond the music, one of the things which first stood out about the band was their sense of camaraderie. In an age where people are spending more and more time online, these friends get together, jam and make great music.

There’s a very distinct vibe amongst the group, and it’s the sort of thing that lets you know what kind of people you’re talking to. “I guess we should actually try and promote the album,” one of the band members said while laughing. “This would be a show we would go to if we weren’t already playing it.”

It’s that same lack of concern that shows how laid back the group is. The carefree, fun-loving band is just down to have a good time and throw a great show.

As the great existentialist Jean Paul Sartre once said (and likely not over PBRs), “Life is what you make it.”

It’s obvious that Sports Bar has made life the way they want it.

Check out Sports Bar at Strange Matter this Friday. The show will feature Cruzer (RVA), Instant Regrets (Greensboro, NC), Nana Grizol (Athens, GA) and Bad Moves (DC). Show is at Strange Matter and doors are at 7pm, music starts at 8pm sharp with Cruzer. $10. There is a pre-sale available through Strange Matters site as well as through Facebook.