Members of Richmond’s cycling community gathered beside the family of Corey Frazier Wednesday night to memorialize a young man who died in a traffic collision while bicycling through the Fan recently.

Frazier, 21, was a VCU student who worked at Max’s on Broad downtown, and used his bicycle as a means of transportation. Family, friends, and coworkers convened before the memorial ride in Federal Park, near the site of the crash, while bicyclists handed out lights donated by local advocacy group BikeWalkRVA.

After the light giveaway, participants walked around the corner to the crash site at the intersection of Rowland and Main to lock a white-painted ghost bike to the street sign post, as a memorial to a man friends described with adjectives like brilliant, hilarious, and unique. 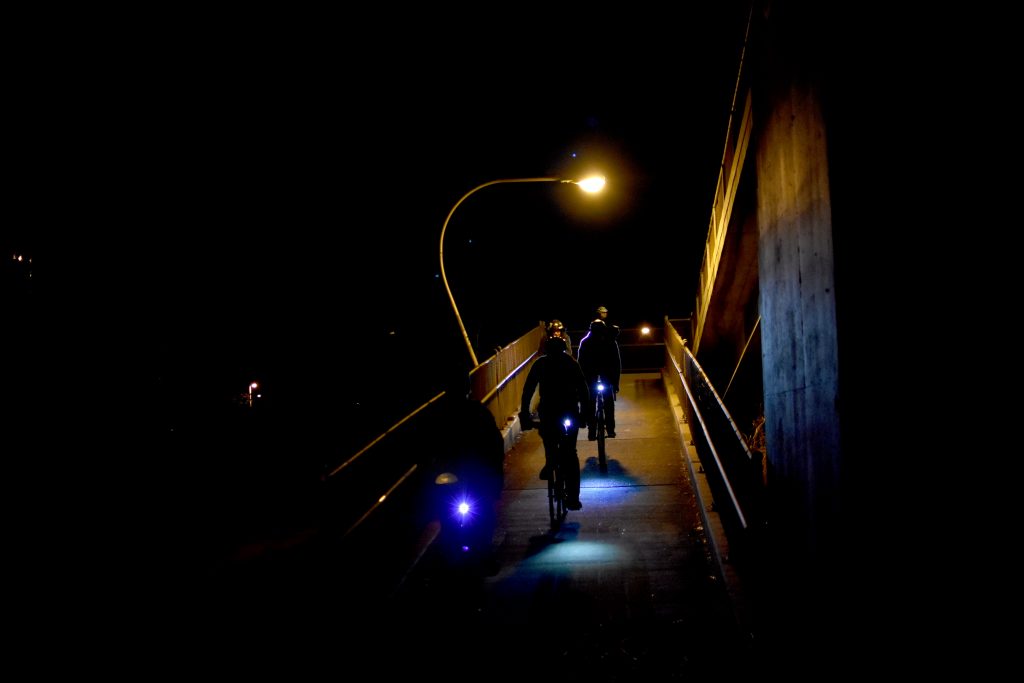 After a candlelit moment of silence, route planner Mark Boerner addressed the gathering to lay out safety rules for the ride. Above all, he stressed the importance of being seen and communicating with each other, then led some 70 bicyclists on a journey in honor of Frazier. The event was planned by a coalition of bicycling groups, including local participants in the global event Critical Mass and DFL, a social bicycle club that hosts weekly evening rides.

As the ride meandered through the Fan, riders got to know one another and shared reflections on Frazier, safety, and the state of the bike community in general. One man said he didn’t know Frazier, but came in from Hanover County for the ride. “It’s important for us to come together at these moments,” he said. 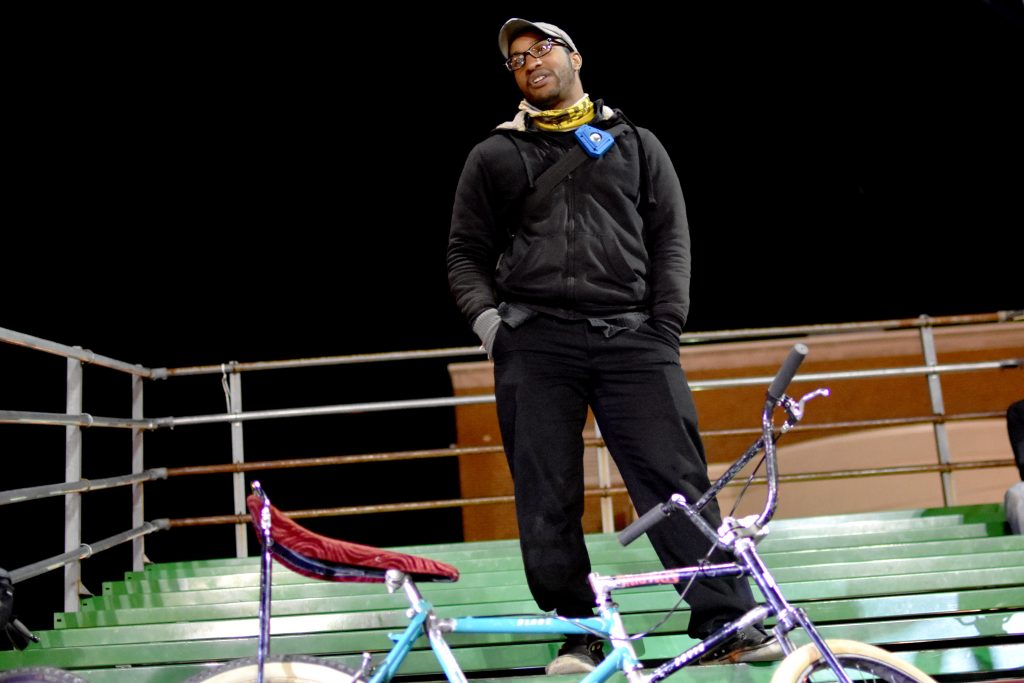 The riders stopped at Randolph Community Center after crossing the highway on a small pedestrian bridge. Riders headed over to the basketball court where a coworker named Mike climbed the bleachers to share memories of bantering with his friend over basketball and football on slow nights at Max’s.

The procession continued down Grayland Avenue to Harrison Street into the heart of VCU, where riders rode in circles around the VCU compass. Cutting over to Shafer Street onto Marshall Street, riders continued to Max’s, where they met up with Frazier’s family and restaurant staff for hugs and remembrances before breaking into smaller groups sitting around the Maggie Walker statue.

After talking with Frazier’s mother, Boerner spoke about the ride, saying, “Tonight was about Corey and about being safe.” He described the event as a good tribute to Frazier, saying, “In the extended Richmond biking community, it was clear tonight that Corey was a big part.”

Others shared his sentiment on the broader community, including Robyn Hightman, a VCU student who said she only casually knew Frazier, adding, “We’re a community. We know something like this could happen to any of us.”

Hightman is a member of DFL and described the memorial ride as in the same spirit of their regular events. “We ride every Wednesday at this time, and it’s always a no-drop ride,” she said. “That means we’ll stay with you no matter what you’re riding or how long you’ve been on a bike.”

Another organizer, Daniel Reiner, was there as a participant in Critical Mass, a ride that meets on the last Friday of every month for an event that’s part protest, part moving party. He said he partnered with DFL because “it just made sense to turn this ride into a memorial,” talking about the spirit of community and sense of loss felt by riders from groups all over Richmond. “This is the third ghost bike we’ve done, and I hope we don’t have to do many more,” he added. 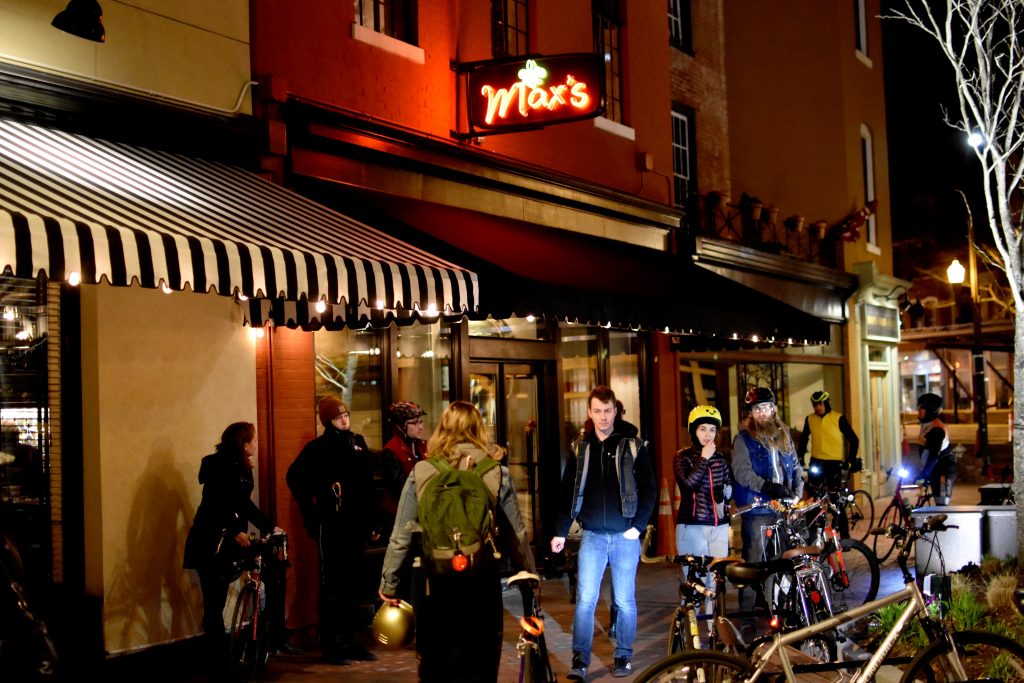 Many riders were happy about developments like the new bike lane coming to Franklin Street, but also expressed feeling disconnected from the city on infrastructure, speed limit enforcement, and other issues, describing work as infrequent and oftentimes short of where it needed to be to make a safer Richmond.

As the evening ended, participants found others traveling in the same directions, and set off as smaller groups for safe, well-lit, rides back home.

Last night’s City Council meeting almost filled the 260-seat chamber, thanks to online buzz around a resolution asking the General Assembly to permit Richmond to remove its Confederate monuments, introduced by Councilman Michael Jones. Nearly every seat was occupied by a supporter of the resolution, some standing near the back of the room when they could not find a chair, on a night when public testimony would be limited and the resolution merely introduced, not voted on. They came to support former NAACP of Richmond president Lynette Thompson, Councilman Jones, and a proposed plan to memorialize the victims of slavery in Shockoe Bottom. 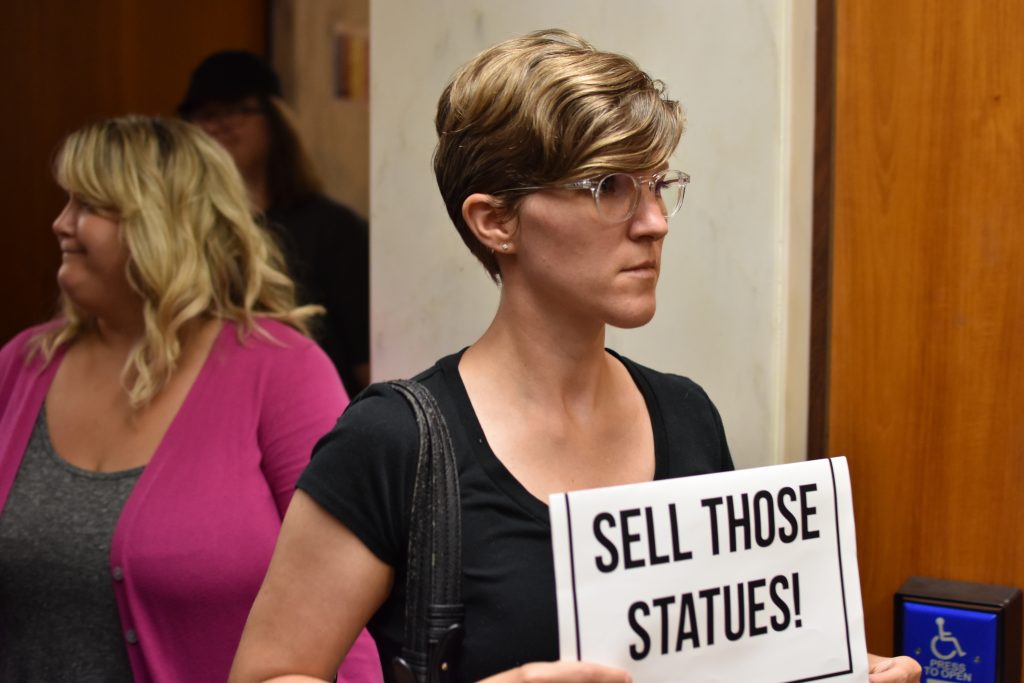 The resolution is not binding. It would merely permit the City Council to ask the General Assembly to allow Richmond to vote on removing any Confederate monuments in the city, listing J.E.B. Stuart, Robert E. Lee, Jefferson Davis, Thomas “Stonewall” Jackson, and Matthew Fontaine Maury on Monument Avenue as examples. Despite a clear show of support from the public, the resolution is not expected to pass. Council members Chris Hilbert, Andreas Addison, Ellen Robertson, Kim Gray, and Parker Agelasto all favored waiting for the Monument Avenue Commission to finish its work, with Hilbert, the Council President, calling the issue a distraction. The meeting tonight only had a few speakers, four of them speaking about the statues, all of whom had signed up in advance. 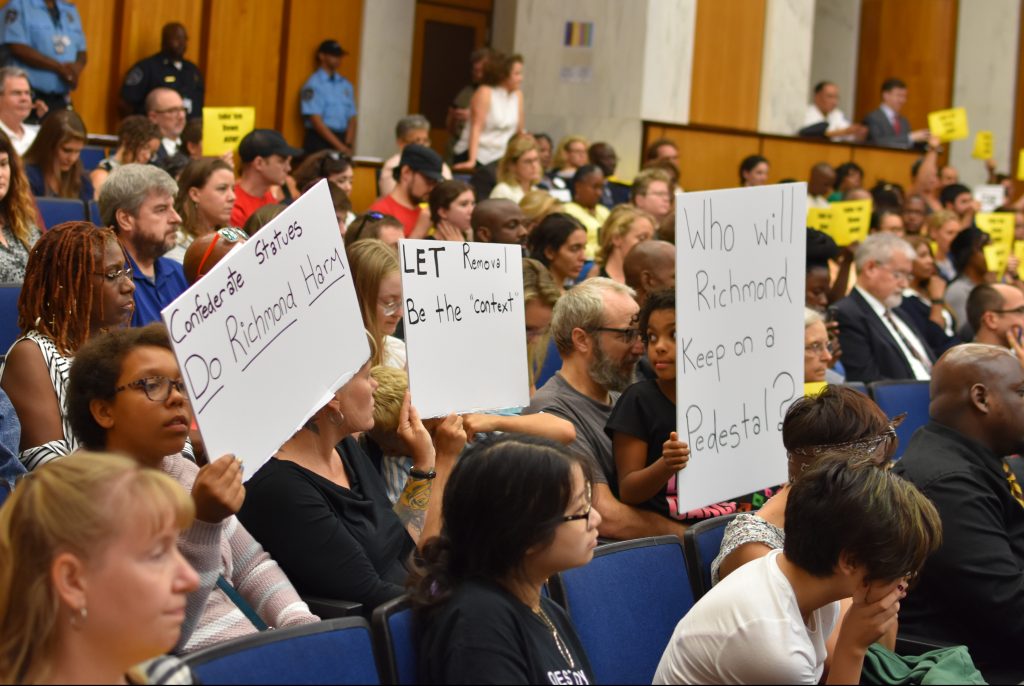 Lynette Thompson spoke first, urging the commission to remove the statues and to expand the Lumpkin’s Jail Site memorial to include the rest of the 9-acre area where people were sold as slaves. Shockoe Bottom was the site of the second largest slave market in America behind New Orleans, and Thompson expressed worries that African American history would be erased by future development if the area wasn’t protected. The project she referred to is known as the Sacred Ground Historical Reclamation Project, and has been brought before the City Council before. Applause is not permitted, but Council patiently waited as nearly the entire room cheered for Thompson and her proposal.

Thompson brought many of those in attendance, and Phil Wilayto of The Virginia Defender brought the bright yellow signs that read “Take Em Down Now.” After the meeting Wilayto offered his group as volunteers to remove the statues if a museum could not take them. 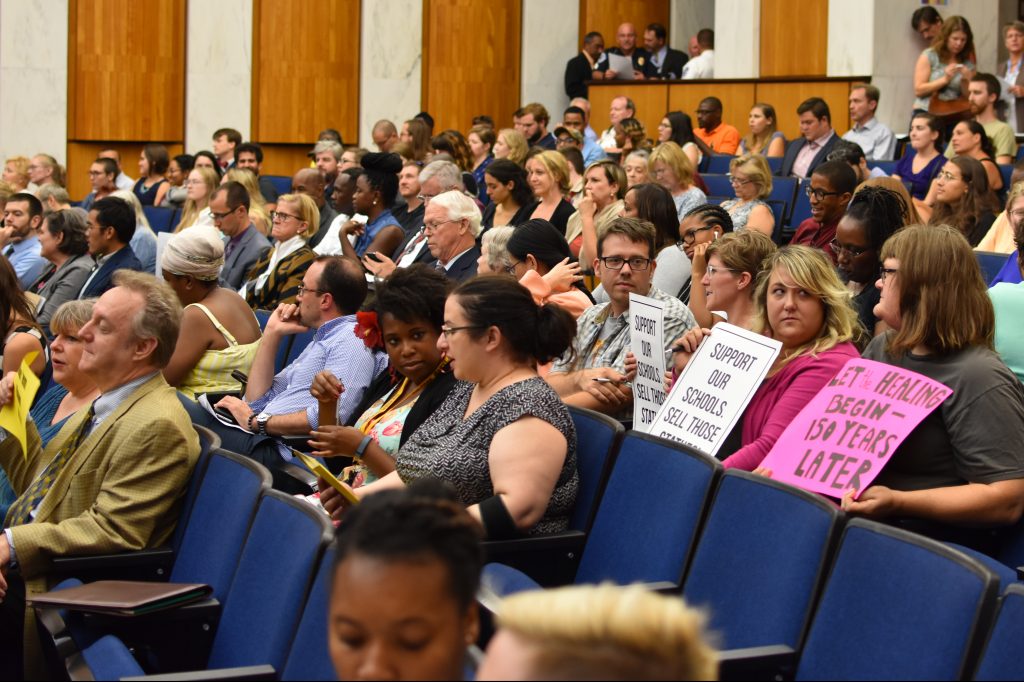 The second speaker, former Councilman Marty Jewell, was also against the statues. “They were enacted as a middle finger,” he said, in one of his characteristically blunt speeches. He tied the memorials and monuments to Jim Crow laws, and ended his remarks by calling for a full truth and reconciliation process in Richmond.

The theme of history erased was taken up next by Carmen Terrell, who spoke following Jewell. “I’ve seen our black history be removed. If the whole truth can’t be told, why have any statues at all?” She pivoted to classism and lack of opportunities for the poor, before calling for unity and support of Jones’s bill.

Only one voice spoke out in dissent; Raymond Vance Baugham, Jr., was the last speaker to address the monuments. He equated General Lee to General Sherman, calling both men controversial, and made a slippery slope argument about other historical figures who kept slaves, asking why we honor George Washington, for instance. He went on to list every US President who owned slaves, and drew a few claps when he described the memorials as an attempt to heal wounds and create unity.

Statues weren’t the only item of discussion, though. The meeting opened with an awards and recognition ceremony for several different individuals and organizations. Among them was an award for Richmond Kinship Month, recognizing the many people who care for children and another for RAM Camp, thanking VCU and the organization for its role in making Richmond a better place to live. The Council also had a proclamation on bicycling, naming October Walk and Bicycle to School Month, and setting aside the first Wednesday of the first full week of October as Richmond Bike to School Day. Parents and bike activists were on hand to accept the proclamation and pose for a quick photo.

The Council kept quiet during testimony, until the last speaker, who was there for a slightly different issue. “At the risk of sounding ridiculous after all these other concerns, I’m here to talk about trains.” Rebecca Stein, a Carver resident, was talking about the regulation requiring trains to give loud toots at crossings, something which starts every morning between 3 and 4 AM and continues, producing a 90 decibel noise comparable to a lawn mower. She was hoping the Council would consider adopting an ordinance that would replace the loud train horn with a different safety measure. For her, Hilbert had an answer; the Council had considered this in the past, and he’d be happy to let her know what happened with the previous process.

After that, the public largely filed out, leaving a much emptier hall to the Council for their remaining 40-odd agenda items. The next meeting is October 9th, but it’s unclear if the Council will vote on the resolution at that date.