Later this month, Firehouse Theatre will combine burlesque, Dolores Umbridge, sideshow acts, Jeffrey Dahmer, and improv games to bring fans and those with a passion for the weird and unusual with their latest production, Villains of Vaudeville by River City Vaudeville. Ray Bullock, Founder of River City Vaudeville, wishes to bring back the old style of vaudeville and promote artists and styles of performance that may seem underground in the Richmond community.

Mixing stand-up comedy, singing, burlesque, improv, and sideshow performance, vaudeville is the multi-faceted performance art of the 19th century. And while many associate vaudevilles with a naughty aspect due to the burlesque, Bullock said that vaudeville is a dying art that needed something to bring it to audiences’ attention again.

Bullock, a Richmond native, has been involved in the performance scene for the last 22 years, beginning with standup comedy. After running the 9:55 Club, and having several friends who were involved with circus art, comedy, and more, Bullock realized he wanted to show Richmond the alternative performance art forms that were not so common.

“These things need to come together because there’s so much talent, it’s kind of separated. So I thought, ‘Why not bring back old school vaudeville?’ which all of those things are in it.”

But how do villains play a role in vaudeville? With The Devil himself hosting and Dolores Umbridge and Doctor Horrible acting as stagehands (or “chaos control”), audiences can expect a variety of well-known characters doing uncharacteristic acts. Maleficent and Norman Bates will both be doing musical numbers. Audiences can expect to see The Joker doing standup comedy. Catch Elizabeth Bathory doing burlesque. Jeffrey Dahmer, Charles Manson, Ted Bundy, and David Berkowitz all perform improv games. And while many audiences might find these acts lack in taste, Bullock wished to reassure audiences that they’re meant to be cheeky.

“The way I look at it, if you’re going to use people [who] did the most horrific, deplorable, awful things known to man, they deserve to be made fun of,” he said. The irony of evil characters, both real and fictional, hosting an entire evening of comedy and performance is not lost in translation.

The performance itself won’t be the only spectacle. House music will be provided by Glitterally Can’t Even, a Ke$ha pop-punk cover band. A raffle to support the actors will include several prizes, including the grand prize of a Joker print signed by Mark Hamill. It is without saying that an audience member of any fan-base will find their niche at this event.

Bullock’s infectious excitement about vaudeville and theatre would make anyone want to go out and see an act of any sort. “I don’t think people realize how much of [vaudeville] we have here in Richmond,” he said. Although vaudeville may seem like crossing too many comfort lines for modern audiences, Bullock was reassuring. “I think Richmond needs that aspect back again because I think, with all the other communities that are combined, it can bring back that pushing the envelope, but still be in a respectful way.”

Above all, Bullock wished to emphasize going out and supporting all forms of live art. “I would love it if people just go out and hunt out live performance. You have great big theatre companies in town. They’re doing fantastic things. You have the smaller underground folks that are doing amazing things,” he said. “You’ve got the burlesque shows, you’ve got the cabaret shows, improv, standup, all of that is right here.”

You can catch Villains of Vaudeville Jan. 28 at 7 pm at Firehouse Theatre. $15 in advance, $20 at the door. Ticket information can be found here.

Get ready to fall down the rabbit hole and once again return to Wonderland, but this time with a much more mature, different kind of Alice.

This Sunday, Burlesque Right Meow will present Alice in Wonderbra: Through the Stripping Glass at the Firehouse Theatre for a night of whimsical fantasies and nonsensical allure. This time, Alice is an adult and has an equally curious adventure with a lot more glitter.

Although the performers have not officially rehearsed together or specifically collaborated a storyline, each performer chose a character to represent from the Wonderland gang that will create a linked narrative.

“We’ve been doing more story-themed burlesque shows rather than just straight burlesque routines,” said Scarlet Starlet, a co-producer of Burlesque Right Meow and burlesque performer, who goes by her stage name. “We’ve been trying to make storylines that are a little more cohesive and have a show that flows together as a story instead of just a show of routines.”

This show will feature 11 performers, including two duets and a trio act, who perform both locally and from out of town. 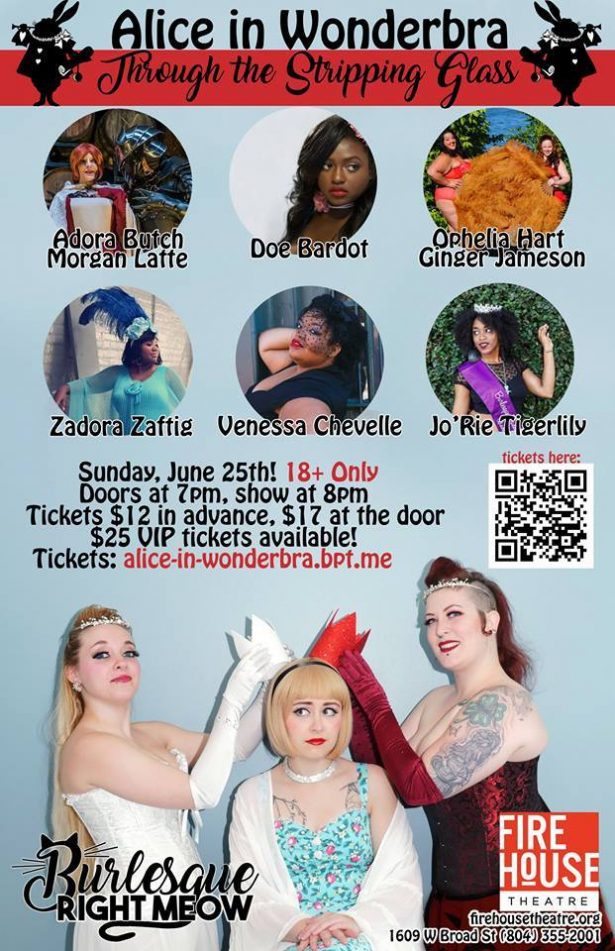 Ophelia Hart, a queer woman of color who also goes by her stage name, is one of those out-of-town performers. Traveling from Washington, D.C., she and her dance partner Ginger Jameson will perform a number featuring some familiar characters.

“Ginger and I are doing a silly Tweedle Dee and Tweedle Dum number to a mashup of ‘Sisters’ from White Christmas and ‘I Can’t Do It Alone’ from Chicago,” said Hart. “We will be in a femme, sparkly, but still goofy version of Disney’s Tweedles.”

Characters such as the Cheshire Cat, the Caterpillar and a special trio performance from the producers of Burlesque Right Meow featuring Alice herself will all make an appearance.

To see Alice in Wonderbra, head to 1609 W Broad at 8 p.m. this Sunday. Tickets are $12 in advance and $17 at the door. For more show information or to purchase tickets, visit the Firehouse Theatre website.

Those Freaking Weirdos are back with something that is relatively rare in the RVA burlesque world: an all-male revue! Their previous Ladies Night show at CenterStage was a huge hit, so this Saturday, TFW Burlesque presents Ladies Night: The Boys Are Back!
END_OF_DOCUMENT_TOKEN_TO_BE_REPLACED

Emma Claire is no stranger to facing fears head on and handling terrifying situations with grace and positivity. In a time when many of us watch the news in fear of the upcoming changes to our political landscape, one could argue holding on to some positivity and hope is of the utmost importance. That’s what makes Emma Claire so admirable. If you follow her on instagram, you’ll find photos of her glammed up and stage-ready for her burlesque performances. In others, you’ll find her beaming as she documented her final treatments for breast cancer.

Having grown up in Richmond but ready for a new challenge, Claire relocated to New Orleans to pursue a job in vintage clothes reproduction. Naturally, she wanted to get all of her annual health check ups before making the move. That’s when her doctors found evidence of the cancer.

“I had no symptoms at all, whatsoever, nothing. I didn’t even really use my insurance much,” Claire recalled. “They found it because they decided to do a mammogram. I’m only 25. They don’t usually do that until you’re 30.”

Claire’s age held a lot of significance for her. On one hand, she was unusually young to have been diagnosed with breast cancer. “Everyone I knew that had cancer was old or very young when they had it,” she said.

On the other hand, her age enabled her to stay on her parent’s insurance, for which all us young folk have Obamacare to thank.

“Obamacare did physically save me. He changed the cut off to 26. Without that I wouldn’t have had insurance,” said Claire. “I’ve been able to have all these procedures, countless procedures. I went from chemo to a double mastectomy, reconstruction, radiation. I was able to get it all done in a year, and get it quickly done because of the Affordable Care Act allowing me to stay on the insurance, allowing me to get reconstruction.”

The conversations surrounding the repeal of the Affordable Care Act have instilled worry in much of the public, especially here in Richmond. Claire said she’s mostly concerned about a lack of replacement plan should the ACA be repealed.

“I know Obamacare has its issues… I just need to know what they’re gonna replace it with,” said Claire. “It’s a very volatile time right now.”

While the cancer wrecked havoc on her, Claire turned the worst of it into positive experience. She’s back doing burlesque after taking a hiatus, at the encouragement of her friends who are also performers. And after returning to Richmond from New Orleans, Claire found herself cultivating a supportive community of her own. She decided to be open about what she had been going through, not only by just telling the people around her but also by posting updates on her Instagram.

Posting on instagram was a way for her to remain body positive as well. Burlesque is known for celebrating all kinds of body types, and posting online and sharing her story was almost a natural step. Claire said it was therapeutic for her amidst all of the changes.

“It was hard, doing burlesque again. But now I feel much more comfortable doing it. It’s helped me embrace my body again, which is more than I could ever ask for. I’ve had other survivors come to my show and say, I’ve had cancer too. You need to be able to re-embrace yourself. It’s fun being able to reach out to people through this artistic medium. That’s why I do it still,” said Claire.

Claire said that if she were to say anything to legislators about the possibility of ACA being repealed, it would be to have empathy – and that policies that include pre-existing conditions and increased age for coverage through a parent were integral to her recovery. “When I posted about Obamacare, I had other people reach out to me being like, ‘Obamacare save my life too’,” she said. “People need to know these stores, so they can put a face to it. It’s affecting a lot of people.”

No matter who or how old you are, please make sure that you are giving yourself breast self-examinations at least once a month. If you don’t know how, you can learn here.

You can check out Emma’s instagram and look out for future performances her.

Quoth the raven, and be prepared for the mystery, because Edgar Allan Poe is coming back to life this weekend.

END_OF_DOCUMENT_TOKEN_TO_BE_REPLACED

Despite the humidity hanging over Hull Street in Manchester, Lily Lamberta sits hard at work for her ten year retrospective installation, a puppet conte storia show (an ancient form of storytelling),
END_OF_DOCUMENT_TOKEN_TO_BE_REPLACED