The US incarcerates more people per capita than any other country in the world and the systematic racism, class-based inequalities, and economic engines which drive these things are well documented – making their continued existence a deeply shameful reminder of how regressive the US still is on crime and punishment.

According to a Prison Policy Initiative report, the break down of incarceration rates per state compared with other countries internationally tells another grim story. Thirty-three states chart higher for incarceration before the first country in comparison registers. That country is is El Salvador. The report observes that, “looking at each state in the global context reveals that, in every region of the country, incarceration is out of step with the rest of the world.”

And earlier this week, inmates in 17 prisons nationwide will be conducting a two-week strike, coinciding with the anniversaries of the death of black activist George Jackson and the Attica Prison riots. Jackson was killed by a guard in 1971 in San Quentin prison and the Attica Prison riots left 40 people dead when police eventually stormed the prison. During the two-week strike, inmates will draw attention to their conditions by going on hunger strikes and sit-ins, as a way to call for reform, access, rehabilitation, fair wages, and ending un-unnecessarily long prison sentences. 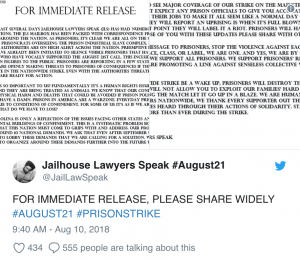 Comparisons between prison and slavery are not unfounded either. In states like Alabama, Florida, and Texas, inmates are given no wages for labor, while in states like California, inmates are made to work dangerous jobs like fighting fires – making $2 a day. All of which is justified due to an exemption in the 13th Amendment, which allows states to force inmates to work for negligible wages for the purposes of cheap labor. The storied abolitionist Frederick Douglas wrote about this exemption back in late 1800s, saying, “[States] claim to be too poor to maintain state convicts within prison walls. Hence the convicts are leased out to work for railway contractors, mining companies and those who farm large plantations.” He went on to make another comparison that is reflective of the modern prison-industrial complex, observing that companies use “convicts” and work them as “cheap labor and pay the states a handsome revenue for their labor. Nine-tenths of these convicts are negroes.”

Not much has changed since Douglas wrote those words given black men are incarcerated at a rate five times higher than their white counter-parts and in some states almost 10 times. In a deep-dive report released by the Sentencing Project in 2016, its preamble states clearly, “Growing awareness of America’s failed experiment with mass incarceration has prompted changes at the state and federal level that aim to reduce the scale of imprisonment.”

Those changes, however, have not come quickly enough. The group organizing the strike from South Carolina are known as Jailhouse Lawyers Speak, who released a statement referring to the action as a human right’s issue. “Prisoners understand they are being treated as animals. We know that our conditions are causing physical harm and deaths that could be avoided if prison policy makers actually gave a damn.” Going on to say that prisons throughout the US are a war zone, the statement also claimed, “Everyday prisoners are harmed due to conditions of confinement. For some of us, it’s as if we are already dead. So what do we have to lose?” 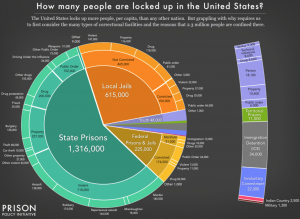 Amani Sawari, one of the spokeswomen for the strike, on her personal website has voiced her opinions on how we can stop the cycle. “We must call out those corporations who contribute to mass incarceration and reverse this cycle of dehumanization and enslavement for profit in this country.” She went on to echo Douglas’ observation that the exception clause in the 13th Amendment “motivates corporations to incarcerate more people.”

Organizations and human rights groups are planning actions all over the US. Look for the hashtags #August21 and #prisonstrike to find out more information and where to get involved.