FEATURED SHOW
Friday, December 22, 8 PM
Skalidays 2017, feat. Murphy’s Kids, The Pietasters, Jackmove, Mylo Shift, Santa Kilmagik @ The Camel – $10 in advance/$15 day of show (order tickets HERE)
It is the end of an era, y’all. The 2017 Skalidays will mark the final live appearance of Murphy’s Kids. This long-running ska band traces its origins back to the thick of the late 90s punk-ska revival, which brought us bands like Reel Big Fish, Goldfinger, and Save Ferris. On the local level, a bunch of high school kids from the Southside started playing their own version of that sound back in 1999, and over the next 18 years, Murphy’s Kids honed and expanded their sound, outlasting the movement that birthed them and almost every other band that had been part of it to become godfathers of the pop-punk, ska, and reggae scenes in Central Virginia.

Earlier this year, they released their seventh album, a progressive concept album called Time Dilation that expanded into psychedelic territory through the use of ambient soundscapes and heady lyrical themes. It was still just as much of a danceable burst of fun as any of their previous work, though, so it would have been tough for anyone to predict that it would also become their swan song. However, only six months later, the band will leave the stage for the last time as part of the long-running holiday charity benefit they created over a decade ago. One thing’s for sure–they’re going out on top.

Chances are good that Skalidays will live on; after all, it’s bigger than just one band, and it’s been that way for a long time. As if to prove that Skalidays is more than just Murphy’s Kids, their last gig will share headlining with DC ska legends The Pietasters, who’ve been on the scene even longer than Murphy’s Kids and have even more classic albums under their belt with which to establish a lasting legacy. VA Beach reggae-punkers Jackmove and local goof-punk maniac Mylo Shift will round out the lineup, along with some between-set sounds provided by DJ Santa Kilmagik. As always, the proceeds of Skalidays will be given to charity; in this case, it’s Food Not Bombs RVA, a group with a deep political-punk legacy of its own. It’s a fitting end for a band that’s given so much to this city and this scene. Don’t miss your last chance to dance along. 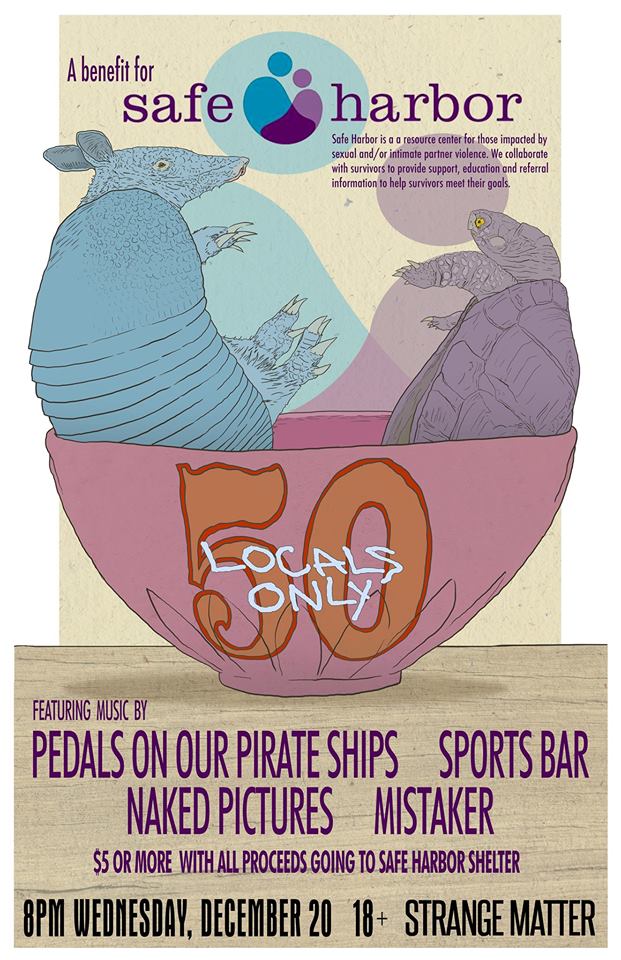 Wednesday, December 20, 8 PM
Pedals On Our Pirate Ships, Sports Bar, Naked Pictures, Mistaker @ Strange Matter – $5
Wow, this is certainly noteworthy–the return of Pedals On Our Pirate Ships, the band that defined RVA folk-punk for years. Originally starting out as Matt Seymour’s acoustic solo project, the band grew to include peppy synths and a tiny, ad hoc percussion kit before finally becoming a full-on four-piece electric band on 2012 LP A Place To Stay. After that album’s release, as members grew older and gained more commitments, Pedals became less and less of a full-time concern. These days, it’s been over five years since their last release, and shows have been hard to come by for quite a while now.

But fear not, fans–Pedals On Our Pirate Ships is set to return tonight at the top of an incredible edition of Strange Matter’s ongoing Locals Only series. The band’s been reconstituted almost completely, with Matt Seymour now being backed by an almost completely new lineup that lacks keyboards but features members of Sundials, among others. There’s no new music to check out as yet, but the band apparently has plenty stored up to unleash upon its fans tonight–so you definitely don’t want to miss it. The addition of a super-solid lineup of heavy hitters including Sports Bar, Naked Pictures, and Mistaker definitely sweetens the pot, but make no mistake, this show is Pedals On Our Pirate Ships’ coming out party, and you’re gonna want to be there to see what their latest incarnation has in store for you. 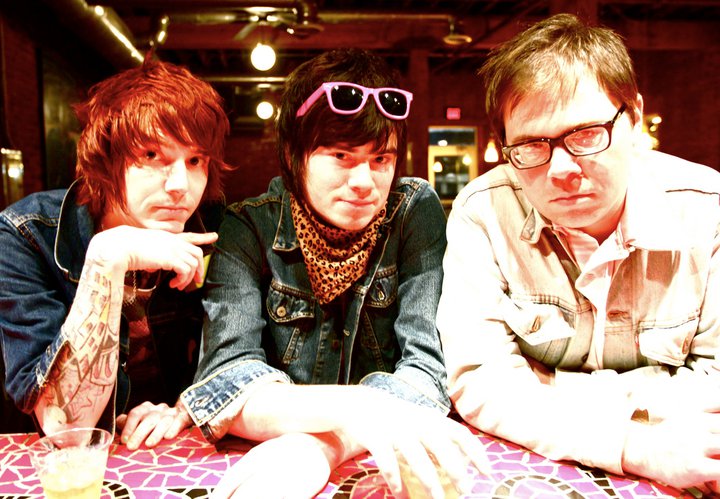 Thursday, December 21, 7 PM
The Pink Spiders, Carousel Kings, The Great Heights Band @ Capital Ale House – $12 in advance/$15 day of show (order tickets HERE)
It’s been really neat seeing Capital Ale House expand their live offerings over the past several months. Here’s yet another show that I never would have predicted would end up onstage there but is sure to be excellent no matter where it takes place. The killer garage-pop of The Pink Spiders has been excellent for over a decade now, from their super-rad debut, Teenage Graffiti, right up to current singles “Black Dagger” and “Easier Than Ever,” both of which feature slightly glammier sounds but the same killer hooks that always made this band one to watch. A new album’s coming next year, but if you show up to this show, chances are you’ll hear a lot of it early. That’s definitely worth checking out.

Carousel Kings are a pretty strong attraction in and of themselves, so don’t sleep on them. This PA melodic hardcore band first got onto my radar with 2014 LP Unity, which featured some truly devastating emo-punk anthems. Their most recent album, Charm City, is their first for Victory Records, so they’ve hit the big time–and the band definitely rose to the occasion. Anthemic emotional tunes full of melody and power still dominate the album, though there’s a definite tinge from 80s pop-metal geniuses like Poison and Warrant hiding in the mix there somewhere (that’s not a dis, those bands rule. Yeah, I said it). Their hardcore lineage contrasts with the garage-rock background of the Pink Spiders, but these two bands are definitely on the same page where writing killer hooks are concerned. You’d be a fool to miss either one on their own, but together, this bill is unstoppable. 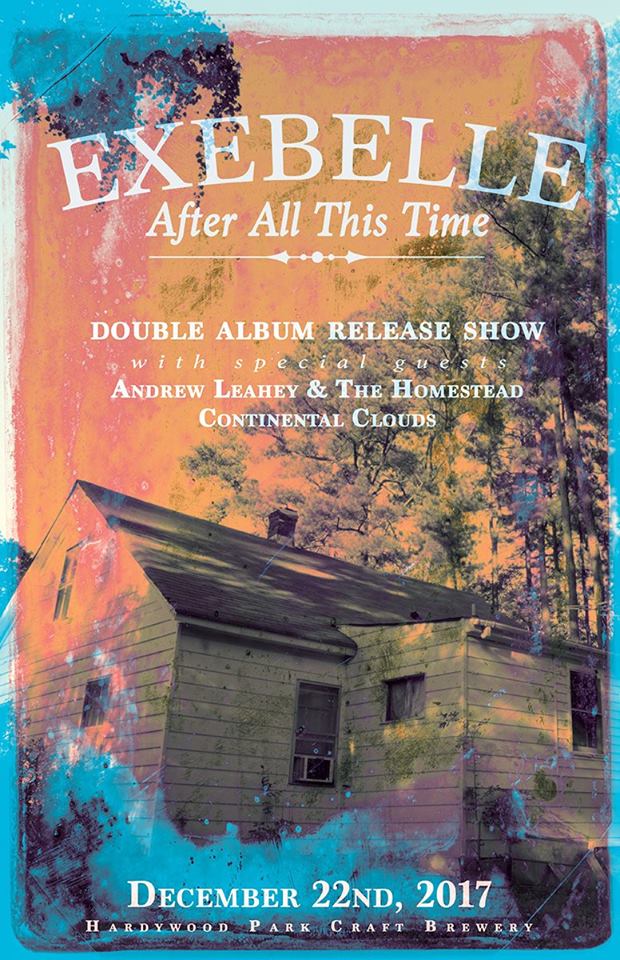 Friday, December 22, 6 PM
Exebelle, Andrew Leahey & The Homestead, Continental Clouds @ Hardywood – Free!
Here’s some excellent news for all the alt-country heads haunting the RVA live music scene. For the first time in six years, Exebelle has a new album for us all. What’s more, it’s a double CD that’s full of all the excellent songs they’ve spent the past half-dozen years putting together. That amount of time has put paid to the band’s former “Rusted Cavalcade” sobriquet, but if anything, the stripped-down name just makes way for some really amazing new tunes. The 19-song double album is still under wraps until this Friday’s release party, but advance singles “The Long Pour” and “Share It With You” both have an outstanding rock n’ roll swagger beneath their country twang, calling to mind The Rolling Stones in their early-70s prime even as they also connect the dots between early Wilco and Southern Rock Opera-era Drive-By Truckers.

The result is potent indeed, and should do more than enough to justify a 19-song double-disc release. It’ll definitely make for a great record release show–Exebelle is promising 75 minutes of music spanning their decade-long career (the majority of which, it must be noted, would be represented by songs from the new record), and of course, they’ll have the new album for sale as well. Exebelle will be joined on the bill by fellow twangy rock n’ rollers Andrew Leahey and the Homestead, who hail from Nashville and are touring behind last year’s excellent Skyline In Central Time LP, a great pairing with the latest offering from Exebelle. Locals Continental Clouds, formerly known as Eric Hunter and the Distractions, will open up with some rad power-pop sounds. Don’t miss a moment of this one. 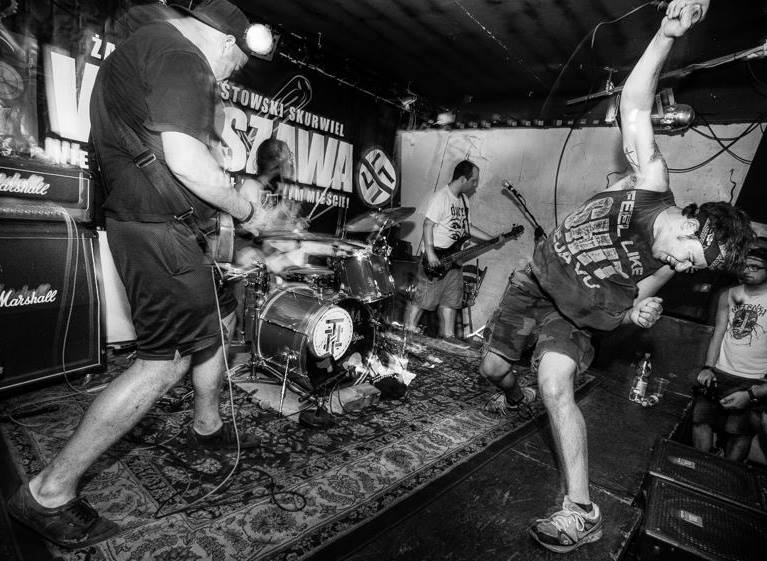 Saturday, December 23, 8 PM
Coke Bust, Dry Spell, Memory Loss, Nosebleed @ Strange Matter – $10 (order tickets HERE)
It’s the weekend before Christmas, and it’s time to bring it all back home with a raging hardcore banger to get all the kids back from school for the holiday out of their parents’ house and into the pit! Coke Bust have been around for over a decade now, dishing out their lightning-speed straight edge fastcore with a fury that just does not let up. It’s been four years since their last release, the Confined LP (which was pressed to 12 inch vinyl even though it’s less than 10 minutes long), destroyed turntables across the world with its furious velocity, and Coke Bust have become a bit of a part-time concern in the years since (seemingly the way of all things where the hardcore scene is concerned), but they’re back with a vengeance to let it rip onstage at Strange Matter once again this Saturday night.

Also back in action is Dry Spell, a Richmond hardcore band who brings the fury in a more rockin’, less speedy fashion than Coke Bust, and demonstrated their technique on their self-titled 2010 LP for local label Vinyl Conflict. These guys are even less active than Coke Bust these days, but you can rely on them returning to terrorize unsuspecting audiences on at least an occasional basis. Looks like Christmas is the perfect time to make that happen, and combined with killer opening sets from currently active RVA hardcore killers Memory Loss and Nosebleed, this will make for a devastating night of sweat and lunacy. You’ve gotta get all spiffed up for grandma’s house the next day anyway, right? What better time to rage? 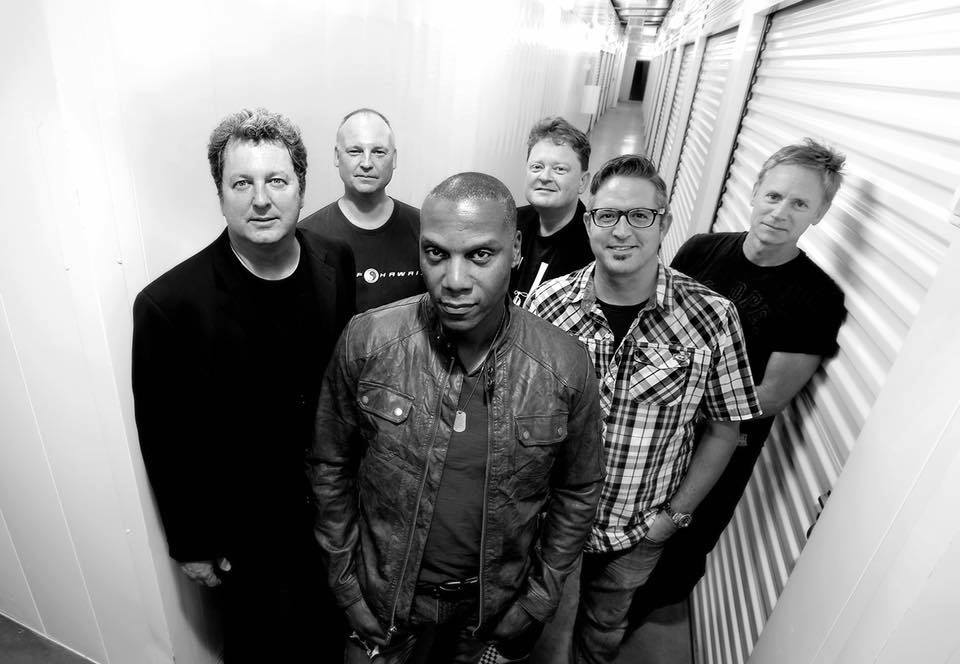 Tuesday, December 26, 8 PM
Fighting Gravity, Karen Jonas @ The National – $20 in advance/$23 day of show (order tickets HERE)
It’s a late Christmas gift from the patron saint of ska, who apparently decreed that the final Murphy’s Kids show just wasn’t enough unmissable amazingness for one week. That’s right–you have the opportunity to celebrate the Feast of Stephen this year with the reunited Fighting Gravity. How could you possibly turn down a chance like this? Well, it’s certainly possible you don’t remember this band from their first time around–I recognize that I’m no spring chicken, and a lot of you probably weren’t even born when No Stopping No Standing came out in 1994. But see, here’s the thing–you can’t even tag Fighting Gravity as being part of that late 90s ska-punk revival. They predated all of that.

Originally known as Boy O Boy (they got sued out of that one), these guys put together a muscular brand of ska with some distinct heavy rock influences, then proceeded to take over RVA with an incredible live show that got huge crowds sweating and skanking with big smiles on their faces. Their mid-90s heyday was marked by excellent albums like Forever = 1 Day and the aforementioned No Stopping No Standing. They grabbed at the brass ring of major label success–which still seemed possible in those heady post-Nirvana days–but never quite made it to the level of Reel Big Fish and all those other bands we talked about before. But Richmond heads know–this band was easily as good as any of them. And 20 years later, their live show is sure to be just as powerful and energetic as it ever was. So end your extended holiday weekend with a reunion that will truly remind Richmond how great we once had it, and give us all the opportunity to relive those days once again.

FEATURE SHOW
Thursday, January 8, 6 PM
High On Fire, Windhand, Mountain Of Wizard, Inter Arma @ The Broadberry – $20 (order tickets HERE)
Cancel all of your plans for tomorrow night! The band through which Pitchfork-worshipping hipsters and diehard purist metalheads find common ground will be arriving in Richmond to steamroll The Broadberry with punishing biker/stoner riff armageddon.
END_OF_DOCUMENT_TOKEN_TO_BE_REPLACED