A “spaghetti western” for the opera is woven with suspense and adventure through Giacomo Puccini’s “The Girl of the Golden West.” Virginia Opera’s production of this classic, which opened last Friday at Dominion Arts Center, is pitch perfect, making for a wonderful evening for the whole family.

In a performance on Friday, Nov. 17, at the Carpenter Theater at Dominion Arts Center in Richmond, Andrew Bisantz and the orchestra create a gorgeous soundtrack to the performance. Lush, cinematic music with gorgeous swells, capture every mood, from the mighty percussion to the romantic strings, and the classic western aura of the horns.

By the start of Act I, the show is already stunning: an intricate set and scenery designed by John Conklin with true to period costumes designed by Constance Hoffman. The lighting, designed by Adam Greene, helped bring the west to life.

As the opening scene unfolds, a classic western scene is put on display: a saloon packed with miners exchanging hearty hellos and back slaps, solitary souls keeping a bottle close, card games only for the brave, and songs of men longing for home.

Around the middle of Act I, Jill Gardner’s Minnie, the pistol-packing saloon owner, makes her entrance, completely shutting down an all too classic bar fight. The choreography by Erik Gaden makes every punch visceral. 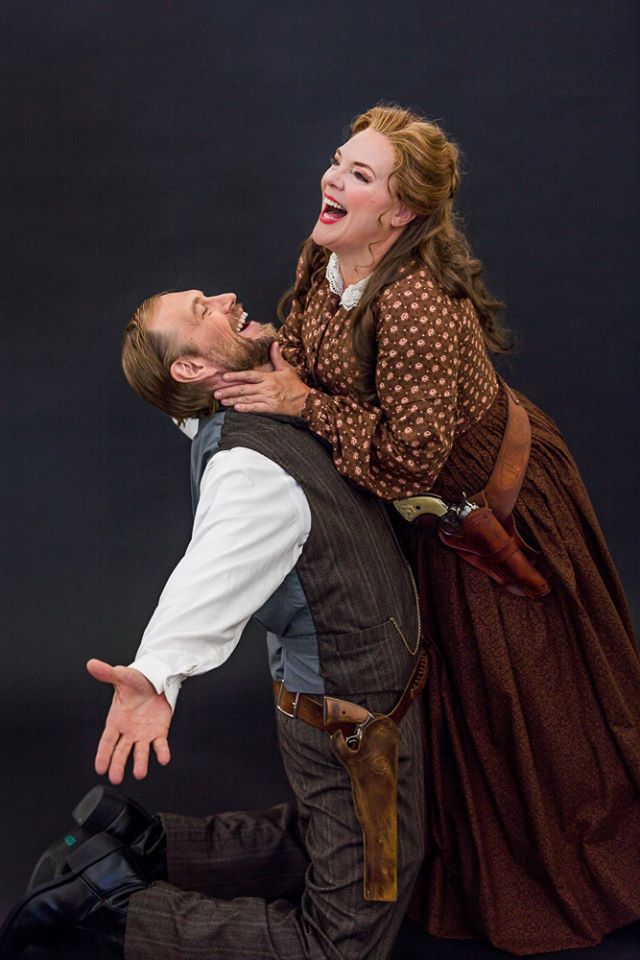 Gardner wins the audience’s heart early, and keeps it the whole show. Her singing touches every emotion, and she hits notes on both sides of the scale. Her acting, however, is what really makes the show. Gardner truly becomes Minnie. The audience feels her loneliness, her vulnerability, and most of all, her heart. W get to know her as a mother figure to the miners, as their (literal) teacher, and their protector.

Tenor Roger Honeywell, as Dick Johnson, also puts in a rich performance, showing us in great depth what Minnie has done to his heart and his soul, eventually ending bandits life he led. Honeywell puts all his emotions on display for us, as he is torn between his gold fever and deep love for Minnie. His voice captivates as we follow him on his journey to redemption.

It helps that Gardner and Honeywell have genuine chemistry, a connection that shines throughout the production.

Baritone Mark Walters, as the gambling, infatuated Sheriff Jack Rance, has a commanding voice in the show. His tone is rich and warm and his portrayal of the sheriff is assertive and compelling. He is yet another part of the “gold” that makes this show.

“The Girl of the Golden West” is a story that will captivate everyone, regardless of age. For those that swear they “don’t like opera,” let “The Girl” change your mind.

The production now moves to Fairfax, for two shows at George Mason’s Center for the Arts. December 2, 8:00pm, and December 3rd, at 2:00pm.

Holy shit guys, Weird Al is coming to Richmond on June 11th. It’s true–the king of parody music is embarking on massive nationwide tour and we’ll get the chance to see him come through the Carpenter Theater.