Like the Free Union native Ashcom himself, the exhibit is rooted in the south, depicting not only quintessentially southern scenery and landscapes, but a place of Ashcom’s own invention–the fictitious rural town of Hoys Fork.

Candela Founder and director Gordon Stettinius said the concept of the show–photography through the lens of something literary–was one of the things that compelled him to showcase Ashcom’s work.

“I think it’s a pretty novel approach to photography to basically take a creative writing approach. He’s created a small town,” said Stettinius. “He’s populated that small town, he’s fleshed it out with a lot of color, and he’s created a fiction with this work. It takes a little time to get up to speed with it. We’re so comfortable in photography representing truth, that it takes a little while for us to allow him room to move.”

Ashcom dodged any questions about the actual setting of the photos and of Hoys Fork itself, preferring the work to remain cemented in fiction. A reveal would be a step too close to reality, a move away from the context he has created.

“These places are, of course, specific places, but he’s kind of redacted the specificity,” said Stettinius of Ashcom’s exhibit. “He’s tried to take anything that might reference a specific community out. It’s large format photography, so it purports to be honest but he’s taken some liberties, which is pretty interesting.”

While the exact location of the photos is withheld, the images are all reminiscent of rural Virginia and Kentucky, heavily representative of smalltown South East. The literary component goes further than the exhibit’s veneer of fiction, it manipulates a number of literary tropes, drawing heavily from authors of southern literature.

“He’s created a number of narrative threads that criss-cross, but they are not just simply understood. It’s like Cormac McCarthy or William Faulkner, It’s best to spend some time with the work,” said Stettinius.

Ashcom has been working on the concept for years, even if initially he wasn’t sure what shape the final product would take. It was a journey to piece together the narrative, and Stettinius said Ashcom’s work was inspired by McCarthy’s Suttree, a novel that takes place on the Tennessee River, its reclusive protagonist hallucinating his way through a river valley.

Like McCarthy and Faulkner, “What the Living Carry” is heavily reflective of the southern gothic. Many of the pieces rely on dichotomy–a dilapidated sign from a Family Dollar juxtaposed against a small-town store, cracked pavement against a breathlessly golden sky, a child with a gun tucked in the waistband of his jeans.

There are houses replete with turrets and iconized gothic architecture, and the thematic elements of decay, the grotesque, and violence posed against a near-mythic backdrop. Stettinius said it’s a show best consumed in person.  “I don’t think we have the attention span online to let something like this marinate or allow ourselves to read this project…while there are some beautiful singular images, I find the whole more compelling.”

Ashcom, whose release of his book “What the Living Carry” by MACK Books coincided with the exhibit opening, declined an interview, preferring the work to be explored from the viewer’s perspective rather than his own commentary.

I grew up 20 minutes from Ashcom’s hometown. I’ve spent my lifetime immersed in smalltown rural culture, and though Hoys Fork is fictitious, it’s a story that felt familiar.

The Kudzu that swallowed scenery in Ashcom’s photos was a staple of my every day, drowning the woods off the highway and choking the trees in our backyard. One sculpture twists a vine and its 3-D printed twin into a double helix, reminiscent of the flowerless wisteria that bordered my yard.

Another 3-D printed piece–the tombstone of the town founder, recreated from Ashcom’s photographs–is a central component of the first gallery room. There’s a table set up nearby with large sheets of butcher paper and crayons, a sign encouraging rubbings of Hoys’ replicated grave. When I was young, my mom took me to the gravesite of the Dinwiddie family, a small plot a few miles from my house. It was hidden across the railroad, over a knoll, and crumbling to ruin. We did grave rubbings with graphite and paper, trying to parse together dates and names from what was left of this family branch, wiped out by a Civil War era sickness in a matter of weeks.

The corroding lots of abandoned store strips, tidy main streets, and one-stoplight towns are all hauntingly recognizable. Even the liminal sense of a railroad crossing at dusk insinuates the Shenandoah mountains in my mind, without having to show them on the skyline.

That isn’t to say all of it is familiar.  A subplot of the exhibit concerned ‘Eugene’ from the ‘Center of Epigenetics and Wellness of the Spirit.’ It’s a narrative unearthed through hand-typed correspondence with the story’s protagonist and a workbench covered in the scattering of glass vials, where some gallery patrons had left samples of their own hair–for later DNA analyzation, promised Eugene. 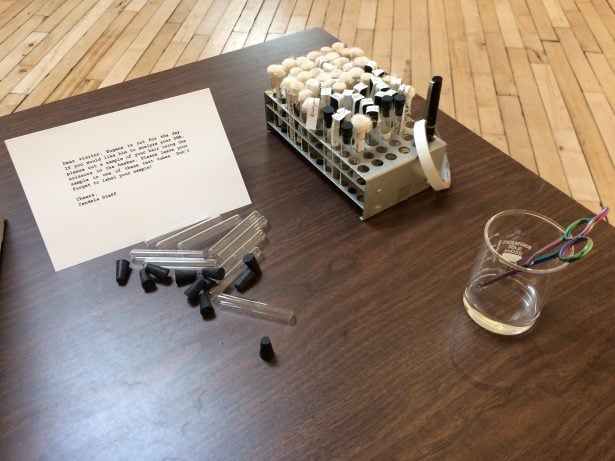 The second room of the gallery holds the audio/visual element. A look through a viewfinder on the table shows a 17-minute loop of a man hacking his way through riverside brush, clearing a view of oblivious swimmers on a beach below. A speaker across the room plays the accompanying audio, the slice of the machete and the hauling of greenery and saplings. It’s voyeuristic, bizarre, and more than a little creepy, but a peek through the viewfinder makes you into a voyeur, double. 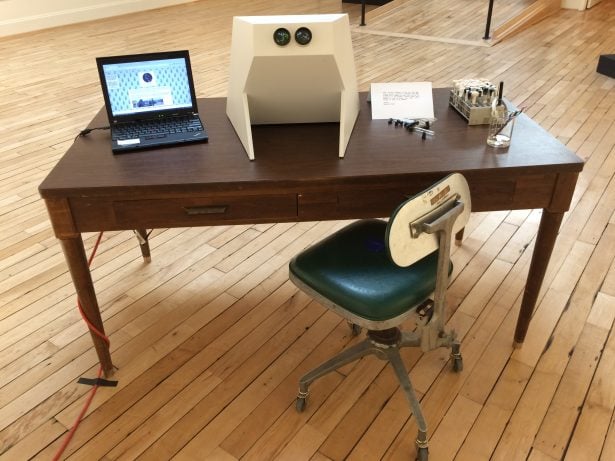 It is a fragmented narrative, one that teases answers while denying a concrete conclusion.  Though identity features prominently, from upbringing to genetics–coils of DNA hidden in multiple works, X and Y Chromosomes snuck into a photo–the exhibit “provides a prompt to mythicize one’s own memories through the lens of Hoys Fork.”

“I think it expands contemporary photography,” said Stettinius. “The audio and video component is fairly illuminating, it helps you into the mind of the protagonist, which is someone Morgan created to have a dialogue with. It’s just a mixed-media exhibition, which takes photography in new directions.”

“What the Living Carry” will be featured at Candela Books + Gallery at 214 W. Broad through April 21.