Guns: the word alone is polarizing. As far as the topic goes, conversation without connotation is near impossible in the midst of today’s politics, but if history is any indication, guns are here to stay for the foreseeable future in Virginia.

Americans love their guns. Standing on either side of the debate, it’s fair to say most can agree on that. Other developed nations have contemplated the issue for years, and inevitably when the word ‘regulate’ comes into play, like clockwork, the arguments come flooding in. 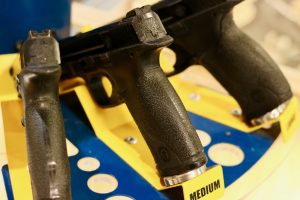 But like many issues of our time, the gridlock surrounding guns comes more from our own unwillingness to hear each other than from the topic itself. The 2016 election divided Americans so deeply that everyone came out at a loss, but life rolls on and public safety isn’t a topic to abandon (no matter how tired political conversations become).

However, in Richmond, one local business is reinventing the Commonwealth’s dated culture surrounding guns. Colonial Shooting Academy has developed their own means of progress in the gun industry with an approach that draws enthusiasts, novices, and professionals from all walks of life.

“If you want to be successful keeping people safe, leave politics out,” said Thomas Lacy, general manager at Colonial. “We opened on the basis that there was nothing like it around. We’re creating a much more modern, updated standard for people. Education is the main vein of it all, and it’s how to have more ambassadors than statistics in the gun industry.”

Colonial is a one-stop-shop, according to marketing director Peyton Galanti. With three public ranges, their staff of instructors is able to work personally with customers to ensure they can safely use the firearms they’re buying. Yet as an academy, their emphasis is on their curriculum.

And while politics is not emphasized at Colonial, sometimes it becomes unavoidable. Most of the team doesn’t believe additional regulations would be effective to increase safety. In their experience, revamping the industry from the inside is a better way to work against the dangerous norms around firearms.

“I tend to not think the answer is government, because it’s slow to act and slow to change,” said Lacy. “Do it in the industry instead. Make it a norm in the industry for people to think, ‘Oh, don’t I have to take a safety class before I buy this?’ We basically started with a whole new model, and we’ve seen other businesses in the industry do it now, too.”

Much of Colonial’s work deals with helping people unlearn the traditional misconceptions about gun safety and culture that leads to firearm accidents across the nation.

“Over the years, we’ve discovered that safety is a perception,” said Lacy. “We put it in black and white and made it simple: it doesn’t matter what your father or grandfather taught you 10 years ago, I don’t care. You’re here, and this is what we expect of you… Ego is the hardest thing to get past. And I have no problem parting ways with somebody with a big ego.”

Carelessness with firearms in America can be unsettling. Just last month in Virginia, a prior accidental shooting by a police officer cost the city of Chesapeake in Hampton Roads $200,000, and an accident with an unsecured gun sent a teenager from Harrisonburg to the hospital. According to the Centers for Disease Control, 3,200 people were killed in unintentional firearm shootings in the U.S. between 2010 and 2015.

But at the heart of it, most of the 30 percent of Americans who own guns are responsible. They’re the ones who don’t make the news, and the folks at Colonial Shooting Academy see them every day — many are their students, even more are their customers. Misconceptions about these owners are created by a smaller percent that are ill-informed, and often become the frightening statistics we see across the country. 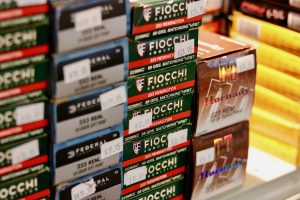 “In the old days, everybody learned from their dad, or their uncle, or the boy down the street who taught them about guns,” said Reese Haller, head of training and instruction at Colonial. “And I can tell you that is the worst possible way to learn anything about firearms.”

Haller is a military vet who spends his days now educating people about guns and teaching classes at Colonial. The classes bring in a range of customers, and instructors work with students from first-time shooters to long-time law enforcement officers.

“If you choose to ignore the rules because you think they don’t apply to you, you’re a danger to everyone around you,” said Haller.

By making safety training a norm within the industry, Colonial hopes to give a foundation to as many gun owners as possible. Lacy’s favorite customers are the ones who are willing to start at the bottom, learn the fundamentals and work their way up.

“Once you get people in and you can get them practicing, you can help them get a good view of what it’s like to carry and what it means to be responsible. “[Un]like the Carytown folks that run around with SKS’s and AK47’s just to prove a point. They aren’t helping anyone. They’re scaring everyone. And they probably need more training than they want to acknowledge.”

Lacy was referring to The Right To Bear Arms Richmond, a group who tried to spread awareness for Second Amendment rights by parading through busy Carytown one afternoon with assault rifles strapped to their backs.

“Everyone was terrified of them, and rightly so,” said Lacy. “You could tell they were uneducated by the fact they thought it was a good idea in the first place to put a gun on their shoulder and walk around Carytown while people were trying to eat at Can Can.”

For Lacy, cutting down on the perception caused by groups like The Right To Bear Arms Richmond starts with education.

“Our customers aren’t going to do that,” said Lacy. “They understand that having a gun will intimidate a lot of people in a room. It’s not respectful at all. And if you don’t have the training, it’s gonna show…you’re going to be careless and reckless.”

Educating gun owners at Colonial is as simple as providing a welcoming environment to learn in. Many customers seek guns for protection but are wary of conventional outlets to get them.

“This is where more women come into it,” Galanti said. “It used to be ‘let me go to a good ol’ boys shooting range or a mom and pop store to take a class.’ Until the last five years or so, there was this idea that women weren’t as good as men, you need to be male to be there, and you need him to help you. It’s very chauvinistic.”

Lacy is proud to say their trainers don’t assume “small hands, small gun”. Women don’t get the usual “Hey darlin” treatment and customers can expect open dialogue about why they’re there.

“I’ve taken customers who were emphatically ‘no, I’m not going on the range,’ and taken them to a range with a private instructor,” he said. “You know, the gun is bad, ‘I’m just here because I’m trying to go to brunch and they dragged me here.’ But by the end, they enjoyed it.”

The team at Colonial wants to make sure people who are scared or opposed to guns can feel safe in public. As far as the firearm-bearers on the news go, Galanti believes the polarizing move is never the right move.

“You’re only going to drive the wedge in deeper,” she said. “If you see somebody open-carrying who’s not law enforcement, they’re probably not very trained. If you see somebody with an AR strapped to their back, they’re probably not very trained…They’re the ones that are most ‘vocal’ in our fight, but they’re hurting us. And we cringe. If we could delete it from reality, we would.”

Starting safety norms in the industry serves as a grassroots campaign, and safety lessons to gun owners from their peers hold credibility. Colonial aims to make people safer on either side.

“Society gets this perception that gun owners are awful reckless people, or that they’re just criminals,” said Lacy. “One of the most frustrating things about working in the industry is hearing the opposing group talk about it, because they don’t do their research about it… I think that’s the biggest problem, and with liberal gun groups out there you’ll have more accuracy and more trusted opinions about it on the left. It’ll make people listen and that helps them get educated the right way, too.”

“Seeing liberal gun groups is a reflection of our success,” commented Galanti. “Seeing anti-gun people come in here and change their minds through education, no matter their political views… we’re bringing it into the mainstream and that gives us opportunities to educate more people on safety.”

Galanti encourages newcomers, anti-gun folks, and the just-plain-curious to stop by and use Colonial as a resource. 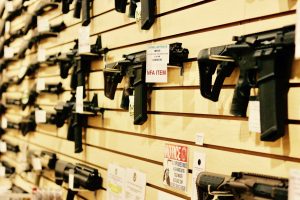 “We can help people think about whether they want a gun or not, and where to start if they do, but we just want to bring in safety regardless,” she said.

“If something comes up, do some digging,” said Galanti. “Scrape off that icing and see what kind of cake it is! We’re here as a resource. If anybody wants to come in and say ,‘I keep hearing this and this,’ we’re happy to talk about it.”