When someone mentions “the comedy scene,” New York, Chicago, Los Angeles, D.C., or even Seattle, are usually the first to come to mind, but not usually Richmond. Despite this lack of recognition, it is a hotbed of comedy, from stand-up to improv to open mic nights held in coffee shops and bars across the city.

Beyond that, the industry is still dominated by men, with women continuing to battle to be taken as serious (or as funny) as their counterparts. But as Richmond continues to grow and its beacon on the map of the arts and entertainment scene continues to shine brighter, so has its community. And the female comics behind it are striving to pave their own way for themselves and other local women in comedy to build up a community despite the obstacles and criticisms they face, all for  their united love for their artform.

RVA Magazine reached out to some of the women in the local scene and spoke to them about their experiences, and how performing as a woman in comedy has made its mark on them.

“I think what kept me in love with improv was that I found a form of expression that allowed me to put into life the characters that were in my head and floating around, and all of those funny perspectives and voices that I was thinking about and didn’t have an outlet to play with them, and figure out what they were,” Coalition Theater Artistic Director Katie Holcomb said. “So, it helped me do that, and then also just the community of people that I was surrounded by, felt like my people. I felt connected to them, and it was a positive environment, and everybody was having fun and we’re all learning to do this dumb thing together and just enjoying everything about it.”

Holcomb originally got her start with West End comedy club, ComedySportz and met her fellow founding members of Coalition Theater through the organization. She is in charge of scheduling the various shows and has a strong, fist-like hand in artistic decisions.

Stand up comedian Francesca Lyn got into comedy after taking a stand up class taught by Jim Zarling of The Coalition Theater. Also a writer, Lyn can be seen around town at various open-mics, but stand-up is where she finds her true passion.

“Improv is a super supportive environment and it’s great and everything, but stand up is kind of more of your own voice, and more of that can come through,” she said. “As someone who is a writer, I enjoy that aspect of it a lot.”.

A standard go-to mental image when you hear the word comedian is typically a lonely mic stand with a dirty brick behind it in a dimly-lit room. Along with those images,  and unsurprisingly, comes various perverse expectations from friends and fans alike for comedians to constantly be “on,” as if you are always on the clock and required to be funny at the ready regardless of the kind of day you’re having, or if you are just sitting in Starbucks minding your business drinking a latte. It follows like a stain or a ghost. The fact is, at  at the end of the day, these women are still just people doing a job like anyone else. 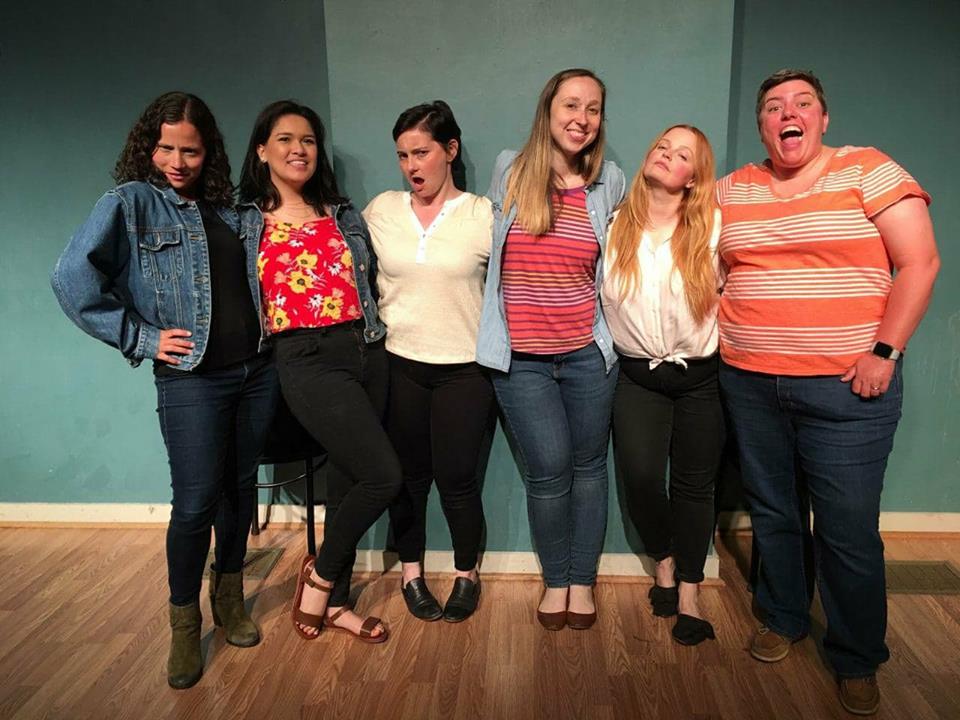 “People have always expected me to be weird. But not in like a social liability sort of way, like ‘Oh, there goes Liz again,’” said local stand up comic Liz Carnage. “I think maybe comedy was just a natural transition, if that’s how they feel anyway. I just am myself and people end up laughing anyway. At my expense, mostly. I definitely agree that comedians have that pressure on them, especially when they hang out with other comedians.”

Carnage is a jack of all trades in the Richmond comedy scene and is the brains behind Sweetheart Comedy. Aside from consistently hosting shows, she is also in charge of organizing many shows in the area from Women Crush Comedy at Funnybone to Plant Zero Dark Thirty at Plant Zero Cafe.

For stand up comedian and Crossroads’ Beans, Bits, & Brews host/creator Sarah Ahmed, she encountered similar experiences to Carnage when she worked at a tennis club.

“There were these sweet, sweet old geezers and they would be like, ‘tell me a joke today! C’mon, Sarah what do you got?’ And I would just tell them the quickest joke that I had,” she said. “And every comic will tell you this. Even if you and I were sitting here writing jokes together, you could tell me an absolutely flawless joke and I might not laugh very hard, or even laugh at all because of the way we are set up right now. I’m not watching you on stage, I’m not in that mode where I’m like, ‘entertain me.’”

Ahmed not only got her start in stand-up but is also on a house team at Coalition Theater in addition to the open mics she hosts at Crossroads.

But, just existing as a woman in the scene itself, Richmond, for the most part, has it pretty good. Even if it is just an accidental jab that someone didn’t realize they made.

“It’s not unusual for me to be standing after a set with two or three of my guy friends, and the guy will come up to me after a set and be like ‘Wow, you were really funny.’ I basically wanted to ask my guy friends, ‘How often do men come up to the other male performers in our theater and go ‘Wow! You were really funny’,” Improviser Summer McCarly said. “I know it’s a compliment, but I have to wonder if they realize how they sound.”

McCarly studied theater in college and went on to be one of the first people to audition for Coalition Theater where she can still be found making people laugh on a regular basis.

It’s unsurprising that as women it is never enough to just be, and we can’t just wear one hat we have to wear three, and we have to be the best just to keep up somewhere in the race.  While most of their experiences have been good, some of the women we spoke to did address a need for change and more representation in the industry.

“Diversity. That is number one. That’s hard because [comedy] in general has always been a white man’s game,” Holcomb said. “I feel that comedy is such a great voice for different perspectives. Especially for people who are marginalized, people who face discrimination, people who are in the minority. Comedy should be their home.”

“With all respect to the platforms that are available, the fact that Richmond, Virginia is the capital city and there is one comedy club is problematic in my opinion,” Deveaux said. “There are too many comedians, and also that the comedy clubs cater and tailor to those that are already established. It makes a very unlevel playing field.”

Deveaux, a writer, and producer, has performed all around the country and last year, won Richmond Funnybone’s Clash of the Comics.

Despite the obstacles female comics face in the “boy’s club” of comedy, conscious steps are still being made. The Chicago-based organization Women In Comedy serves as a platform to unite women involved in the comedy scene, providing resources, education, and free and low-cost events for aspiring females seeking a career in comedy. The site also provides a form to submit information concerning inappropriate conduct that has occurred in theaters and clubs. The website aims to reach out to places where incidents occur in order to address any issues.

As we go forward and continue to build and take note of what goes right and what needs to be recrafted from scratch, one of the biggest things that Deveaux believes will make the community stronger is comradery amongst its players.

“That’s what I really want to see. I will not compete with another sister in mind, body, and spirit when it comes to comedy. If we don’t get along, or if we don’t mesh well, that’s fine, that’s one thing. But I am always going to go up for women first.”

Women in comedy are already seeing the tides turning and progress being made, albeit slowly, little by little because they are resilient and want to see the change happen, and refuse to wait for it. That’s because the future is undeniably female.