At a town hall meeting Wednesday night, over 200 people crammed into the former Community Bainbridge Street Baptist Church to voice their concerns and discuss the opening a new homeless shelter in the heart of a Manchester residential district. Residents and business owners clashed across the aisles of the former church, staking positions on a development that reveals deep divisions in the city of Richmond.

The proposed new shelter, which would be operated by CCC, or Commonwealth Catholic Charities, would replace the current cold weather shelter, located in the basement of the downtown Public Safety Building. It would house around 200 people and provide a centralized base of operations for food, medical, and outreach services, to provide a transition stage for people without housing. 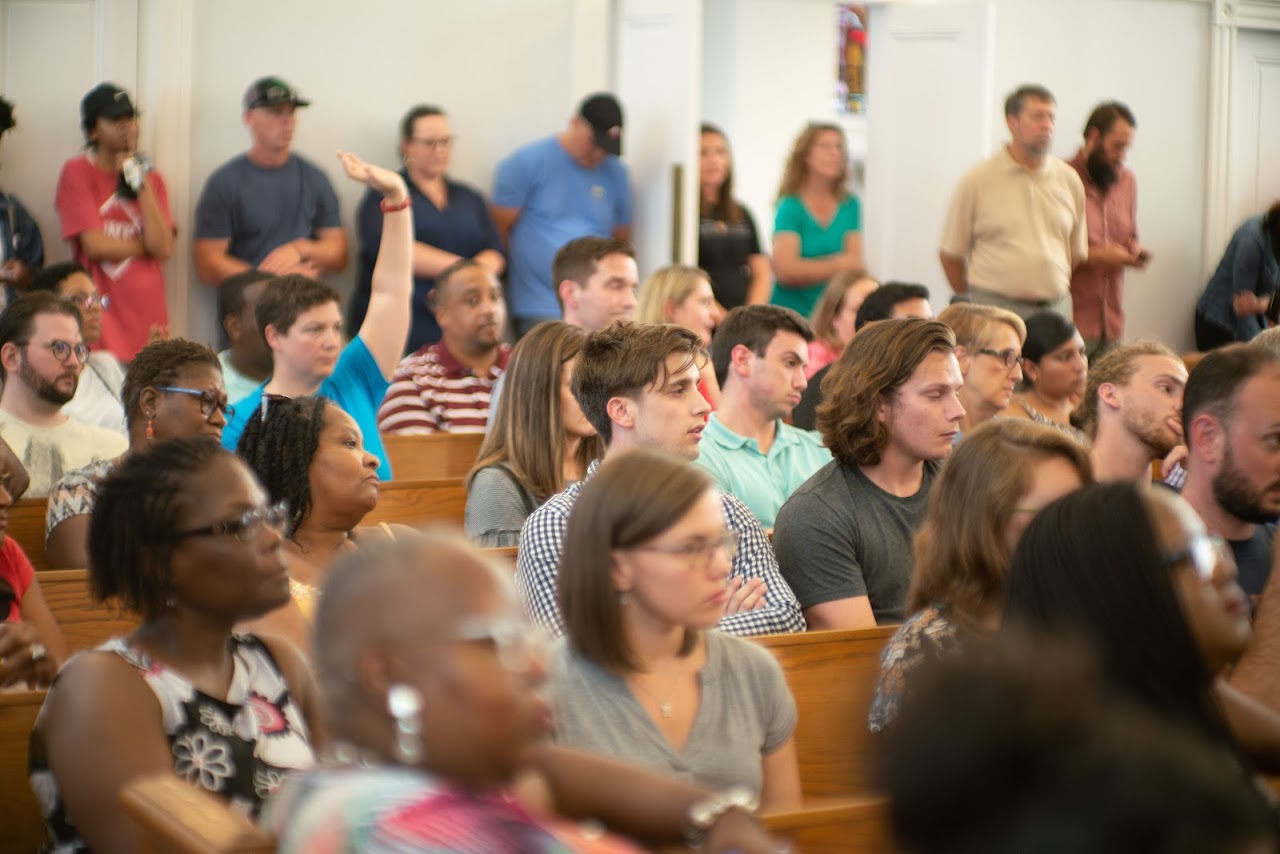 In an earlier decade, this plan might not have been controversial, but with development in Manchester surging, the meeting revealed the cracks between residents, business owners, and government services. CCC began the meeting by presenting the plan for the shelter, leading into Q&A with residents. Jay Brown, director of CCC housing services, led the discussion for the meeting.

According to Brown, this building would relocate CCC’s resources out of necessity. “The conditions at the current site are such that we don’t believe we can provide that service in a way that we can afford people the dignity that they are due,” Brown said. With the new building, Brown said the size and location was perfect for effective services, noting that the plan was in development for three years. While the previous location was only open from 7 p.m. to 10 a.m., Brown hopes to keep the new one open 24/7. 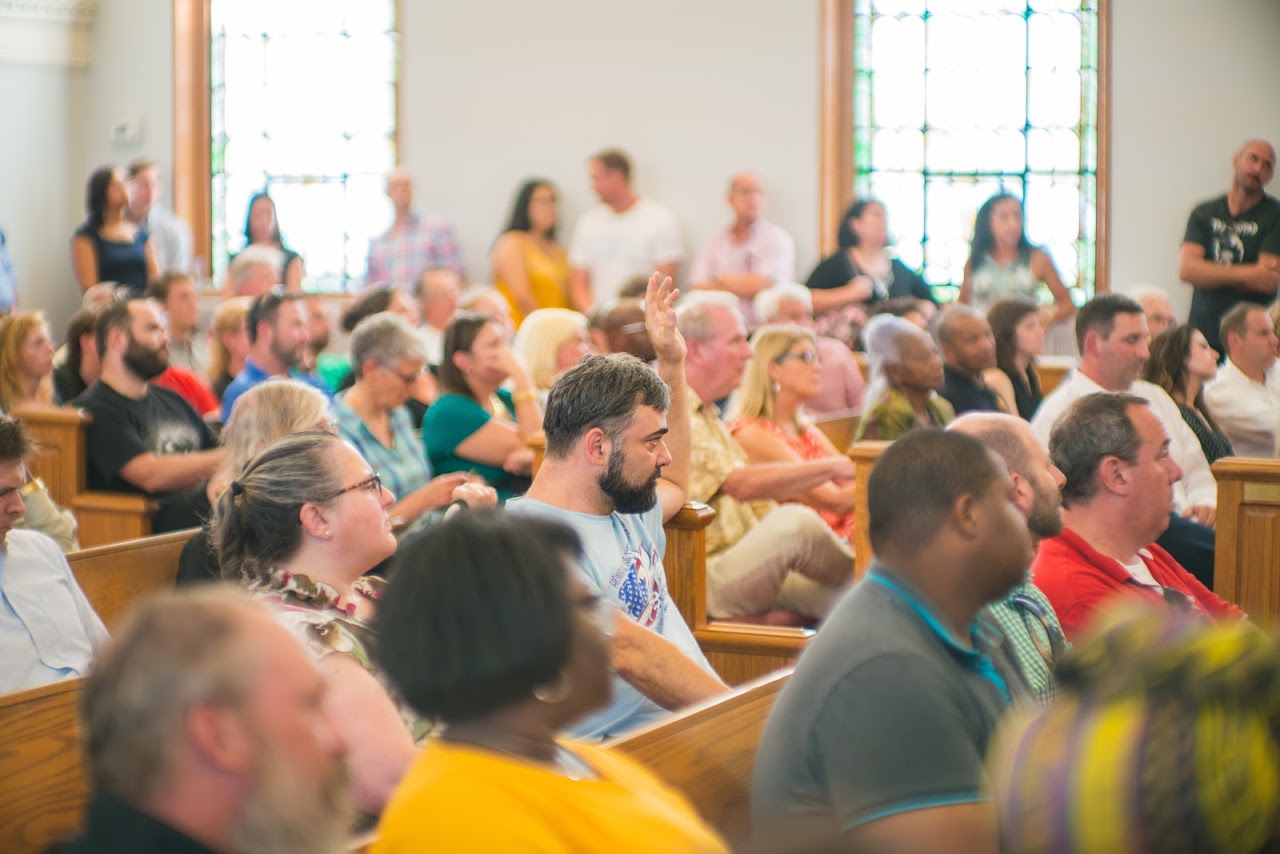 Despite Brown’s confidence, many attendees expressed fears and concerns surrounding the new location. Some thought the area lacked appropriate infrastructure for a facility of this size. Speakers described the plan as well intended, but feared it would fail in a district with poor access to food and public transportation. There are other programs that provide similar services in the area; less than a mile away, Caritas operates a 5-acre center, and Liberation Family Services runs a roughly 17,000 square-foot building serving homeless veterans at 1201 Hull St., just two blocks from the proposed location.

Others argued it would be disruptive and hurt perception of the neighborhood, resulting in lower property values. This argument was summed up in a recent article by developer and blogger Michael Hild on his site Dogtown Dish, where he wrote, “The City needs to calm down, think this through, and come up with well thought out plans rather than this coliseum induced rush-job.” Although Hild and others have tried to tie the shelter to the leaked Coliseum redevelopment plan, there is no evidence for this; the shelter move was planned several years ago under a previous administration, and the Coliseum redevelopment proposal is new. 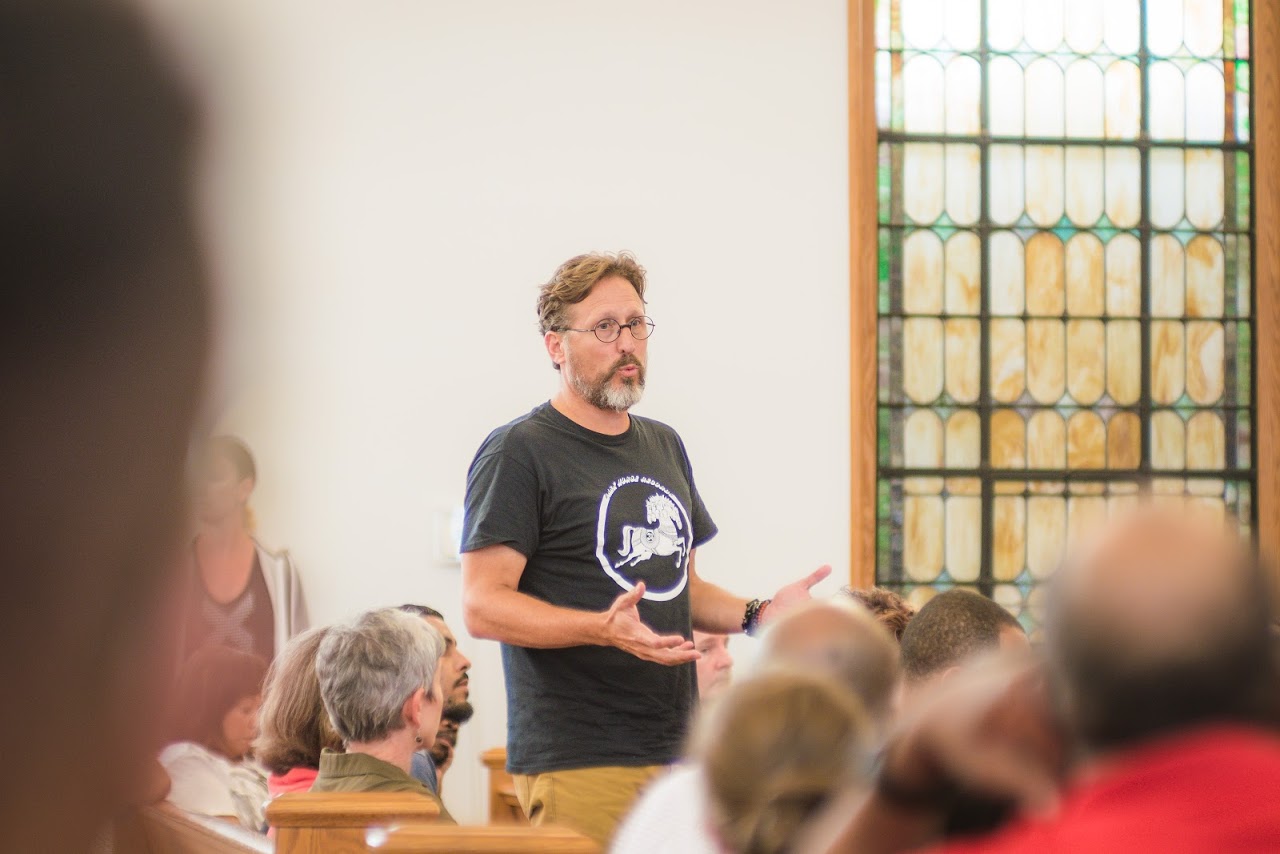 Others at the meeting questioned CCC’s past success at ameliorating homelessness. The organization was founded in 1923, and attendees requested data from previous programs and developments. Brown said they would gather such data and make it accessible at a later time.

Several attendees came with their own assumptions about the impact of the shelter. Some said it would bring an influx of drug dealers, while another speaker said it would deteriorate the past decade of neighborhood improvements. One speaker, Manchester developer Bryan Drake, raised concern for his own safety. “I, for one, don’t want to go back to that place where I have to wonder if should I be putting barbed wire around my yard,” he said.

Residents in support, like Linda Brown, called for compassion and reason. “Everyone needs a place to stay, whether it’s temporary or permanent,” she said. She described the outrage from investors and developers as “convenient” and opportunistic. “When you feel your security is at risk, then you come in droves,” she said. “That’s not how you do it. You have to work together for the common good.” 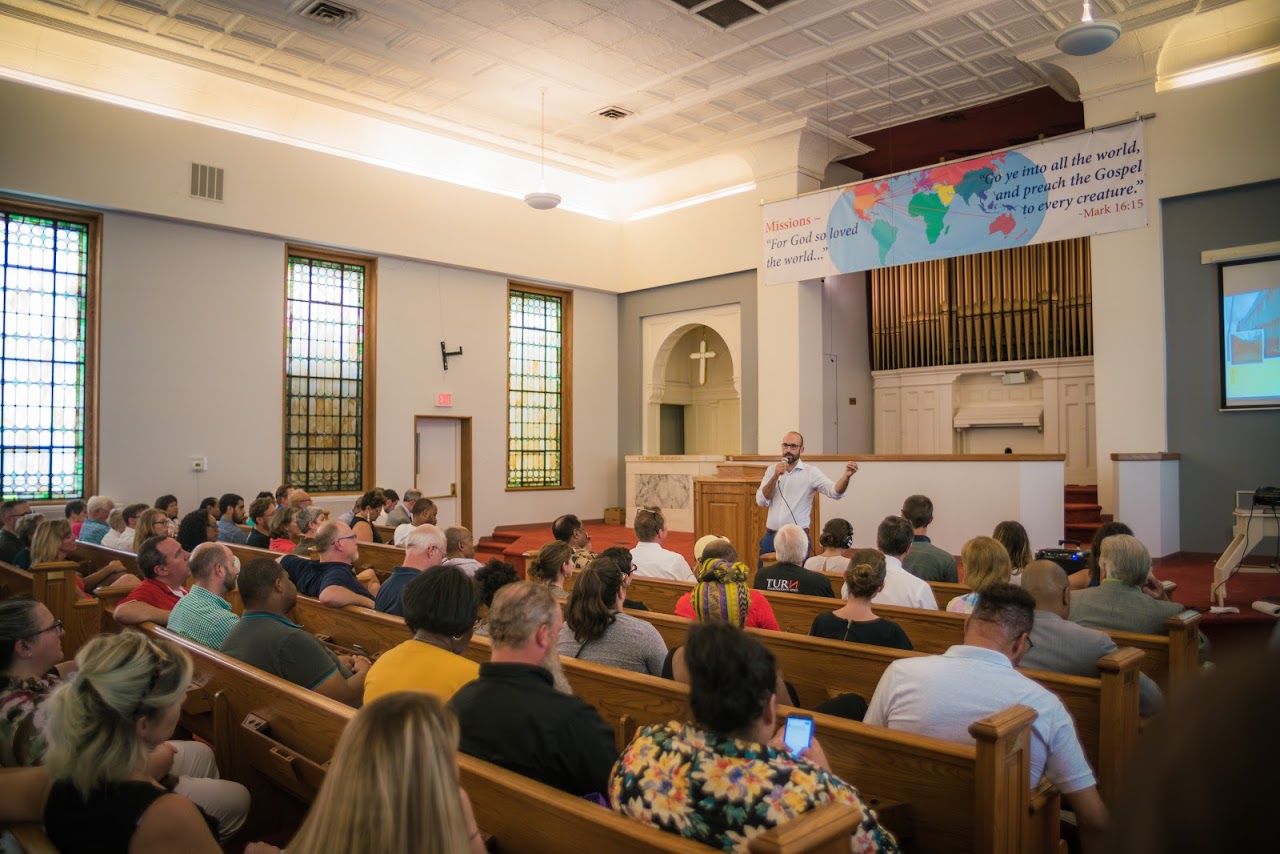 Another local, Theodore Woodson, spoke in support of the shelter from personal experience, having spent seven years surviving on the street. “Not all drug addicts are bad, just as not all homeless people are bad,” Woodson said. “It takes a community to have a success story. I understand your concerns, but you shouldn’t put value in property over human beings, because we don’t know who in this room will need these services tomorrow.”

While the shelter was originally meant for use from October through April, many attendees thought they should consider year-round services. Others offered community help to develop the facility. Preston Page, an advocate for the Blackwell community, offered condolences and aid to CCC. He said, “Your mission is charged with a very broad portfolio of services, is there any way we can help you all, can the community help with what you’re trying to execute and how?”

Montigue Magruder, who has run for office with the Green Party, emphasized a need for community members, himself included, to attend city council meetings more often and to focus on voting in representatives who share community priorities into office. “If the city truly cared about its people, we would not be having this discussion,” he said. “If we have the guts to stand up to our city leaders, stand up to the mayor, to see that our resources go towards helping our fellow human beings, we would probably have no homelessness here because more than likely, there are more empty houses in this city than there are homeless people.” 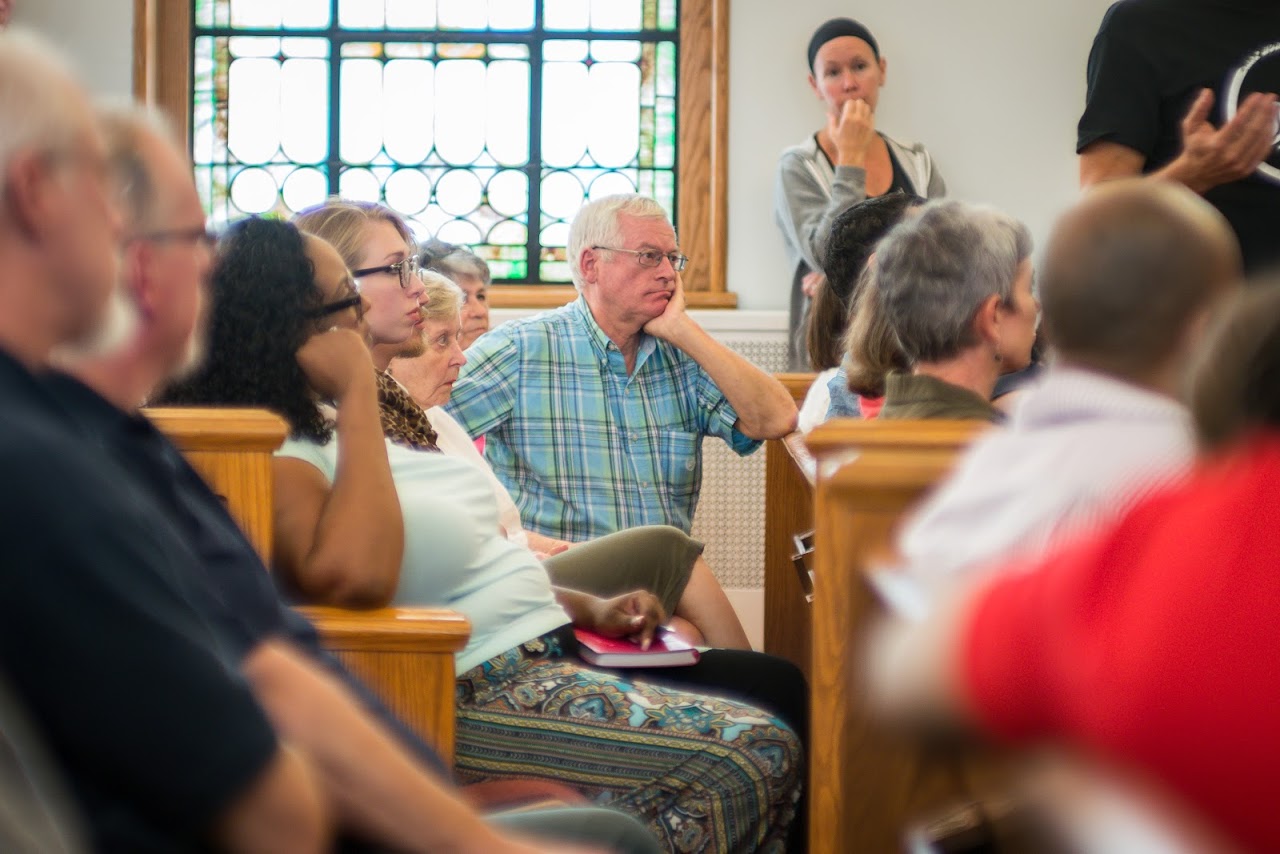 Sixth District Councilwoman Ellen Robertson made closing remarks, sharing sympathies for those afflicted by poverty stuck in the middle of this issue. “At first, discussion was only to provide a new overflow shelter,” she said. “Little discussion was offered about other outreach services. I’m telling you because I want you to appreciate the progression to where we are today.” Councilwoman Robertson also called for appreciation for the developers and real estate investors in Manchester. “You are the community that have opened the door, that have invested the money from what it was into what it is today. They spent their money, their investments, to provide roofs over our heads,” she said.

Brown was open to more community involvement but stressed the tight time frame. “From what we have looked at, this site, from what we have seen, allows us with the best potential to do so successfully, to do it right, and to provide the service with dignity, but we have to move quickly if we want this to happen,” he said.

Nearly 100 people had relied on the downtown shelter nightly from October 1 to April 15, as demand for spots in privately-run shelters routinely exceeded the number of beds available to people in need. Foil blankets and mattress pads are only allocated to women and children, while men are required to sit up in chairs. Through a slideshow of pictures and previous reports done on the shelter, CCC demonstrated the inadequacy of their current facilities. “We think this location is perfect because it has the space to relocate all of our services- we have the room to accommodate all the people we need to,” Brown said.

To accomplish all this, CCC needs to secure a special-use permit from the city. Mayor Stoney’s administration is working with the non-profit to draft a Special Use Permit to clear the city’s zoning restrictions. Approval may be expedited at a proposed August meeting; Brown said they will let the community know when they schedule the meeting.

“This is the first large-scale conversation of what will determine how to go forward,” Brown said. “The feedback I have gotten from [our organization] is that the success and failure is determined on how well we connected with the community – how well you have conversations with people, how you invite the community in to keep them informed throughout the process,” Brown said. Representatives from CCC estimated a 150-180 day process to receive approval; even without community concerns or involvement, construction can’t start soon.

Brown acknowledged that it was a difficult proposition for some in the audience. With the need being so great, and resources being so few, there will always be someone inconvenienced or put out by any change. The meeting, which drifted between logistics and engagement, often came back to matters of perception. Who needs help, how, and where and when? Ultimately, that’s a question for the entire city of Richmond.