The neo-Confederate group CSA II: The New Confederate States of America is trying to increase their presence in Virginia in anticipation of their planned rally on December 9, by appointing a “State Commander”. Only seven have confirmed their attendance as of today, with many expressing worries about counter-protestors, despite the complete lack of violence at the last rally, which cost the city nearly $600,000 in preparation costs.

The CSA II, led the failed rally in Richmond this past September when the out-of-state group planned a show of force to ‘protect’ Lee Statue. Only seven people showed up to support the CSA II, and their actions in Richmond were met with wide condemnation from city officials and residents. This ad, posted on September 20th via Facebook, closed on October 7 without producing a single candidate, a likely indication that their upcoming rally will also generate negligible local support. No one at CSA II was able to speak to the posting at press time.

The statue celebrating Jefferson Davis on Monument Avenue has been tagged with “racist” for the second time in as many days, after crews from Virginia Beach cleaned the same word from a previous tagging late Monday night.

This time, however, the penmanship was better and a second line was added along the bottom of the pedestal with the words “Ban KKK.” Another Confederate monument was vandalized in Norfolk, Virginia, also with red spray paint, reading “#2 Better Luck Never.” It’s a reference to the idea that Confederate monuments serve as participation trophies, a phrase that first emerged as criticism of youth culture before developing into a general weapon in culture war debates. 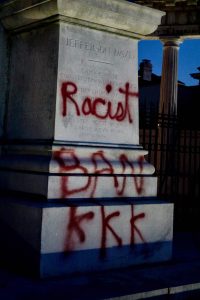 All of this comes after a tense summer with an over-hyped neo-Confederate rally and a long-postponed discussion in Richmond about Monument Avenue and the Confederate statues. A resolution from Councilman Michael Jones on the statues was scheduled for discussion on Monday but postponed, similarly to the meetings of the Monument Avenue Commission, which is tasked with leading discussions on contextualization of the statues or even removal.

The Commission held only one of its scheduled meetings, which was a constrained but often contentious and raucous debate. The commission’s future meetings have been postponed until a few days after the upcoming election on November 7. The next meeting, which will not allow open comment or discussion, will be held on Nov. 14 at 6 pm at the Library of Virginia.

At least one group says the graffiti has spurred them to new action; the CSA II group, previously responsible for the aforementioned neo-Confederate rally, says the graffiti is a “no go,” using it as a justification for their next planned rally on December 9th. 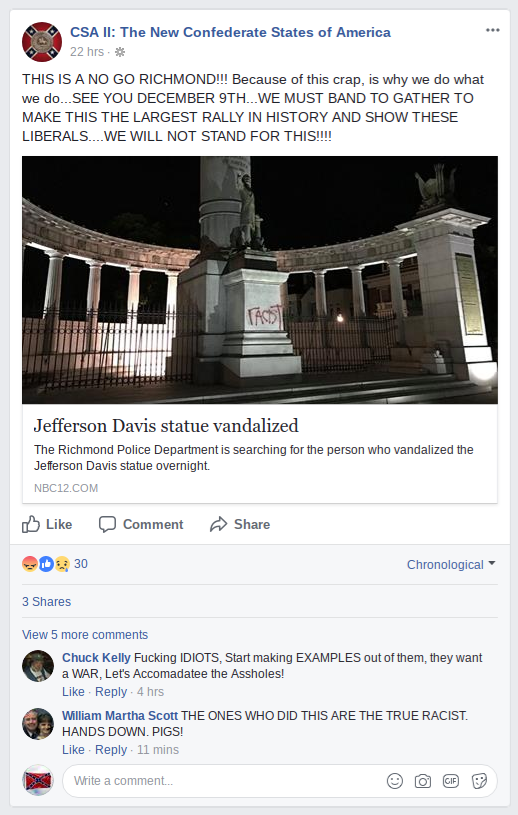 This story has been updated:

*According to The Department of General Services in an email to RVA Mag, the permit request mentioned in this article has not yet been approved and is currently under-review.

Right on the heels of the chaos caused by the ‘Unite The Right’ rally in Charlottesville, the Virginia Flaggers have seemingly announced a rally of their own to protect Confederate monuments on September 16, 2017.

On their official blog site they announced, “Our friends at Save Southern Heritage have obtained a permit from the Capitol Police for a rally at the LEE Monument on Monument Avenue in Richmond for Saturday, September 16 at NOON.  We will be supporting their efforts and need a HUGE showing of patriotic Southerners to make a statement to Mayor Stoney, the commission, and the entire city of Richmond.”

Mayor Stoney announced a commission in June to study how to best handle the controversies surrounding statues glorifying the Confederacy on Monument Avenue. While the first public meeting of Stoney’s commission this past week was a discordant affair, the city has made an effort to remain transparent about the proceedings.

However, according to the Virginia Flaggers, “…the Mayor regurgitated the false narrative as has been circulated by groups such as the ANTIFA anarchists, SPLC, and NAACP, and that which was used by the liberals in Charlottesville in their crusade to destroy the Confederate monuments there.” They followed with, “The Va Flaggers are steadfastly opposed to the addition of ANY context to ANY of our Confederate monuments or memorials and will use all available resources to prevent it from happening.”

This is in stark contrast to the majority of people in Richmond who would like, at a minimum, to see some context added to the Confederate narrative on Monument Avenue.

The Virginia Flaggers were founded by Susan Hathaway in 2011 after the removal of a Confederate flag in front of the Confederate Memorial Chapel in the city. The property is now owned and operated by the Virginia Museum of Fine Arts (VMFA). According to the Flaggers, the Confederate battle flag “ought to be celebrated.” Yet it was only a matter of time before they took up the cause of the Richmond Confederate monuments.

Richmond is ground-zero for the debate over Confederate symbols, given its historical relevance. And as witnessed during this weekend’s Unite the Right rally in Charlottesville, these rallies have ended up as a front for white nationalist, supremacist, and alt-right groups looking to project their messaging through claims of ‘heritage’. The terrorist incident at yesterday’s counter-protest in Charlottesville by a white supremacist who drove his car into a group people, killing one and wounding up to 19 has proven just how contentious this debate has become.

News of a rally like this couldn’t come at a worse time for the city of Richmond. More so since the Virginia Flaggers are claiming, “The Capital of the Confederacy is shaping up to be the next battle ground. We fully expect victory, but will need your help to make it happen.”

*Matthew Sporn and Landon Shroder contributed to this story.

The Jefferson Davis monument on Monument Avenue was recently vanadalized with the phrase “BLACK LIVES MATTER” at the bottom.