The Congressional Leadership Fund (CLF), the controversial Republican PAC linked to Speaker of the House Paul Ryan, has just released an attack ad against the Democratic candidate for the 7th District, Abigail Spanberger. CLF is the same PAC, who only last week, released Spanberger’s un-redacted security clearance forms in a move that was highly controversial and condemned by the national security establishment. The documents showed that Spanberger, a former CIA case officer for counter-terrorism, was briefly a substitute teacher at the Islamic Saudi Academy (ISA) in Fairfax, Virginia. The international school, before closing, was funded by the Embassy of Saudi Arabia, who is an ally of the U.S. in all counter-terrorism efforts.

Spanberger told RVA Mag last week that she only taught at the school briefly and according to her campaign, she was only at the ISA for a year.

Nonetheless, the video starts by asking the question: “What is Abigail Spanberger hiding?” before saying, “Spanberger doesn’t want us to know that she taught at an Islamic school nicknamed, ‘terror high’, a terrorist breeding ground.'” While two students at the ISA were implicated in terrorism cases, the claims made by the CLF video do not pass scrutiny. A timeline prepared by the Spanberger Campaign shows that Spanberger left the ISA in 2003, almost six years before these men were implicated in any kind of terrorism charges.

First CLF ad in #VA07: For the last year, Abigail Spanberger hid from Virginia voters that she taught at “Terror High.” https://t.co/fzKVukjH7k pic.twitter.com/cjS10F9st9

In a statement released this morning Spanberger said, “For a Republican Super PAC to question my national security credentials and integrity based on the time I spent as a long-term substitute, teaching English to children at an embassy school in Northern Virginia, is desperate and weak, and it shows just how terrified they are of having an independent voice representing this community in Congress.”

Justin Jones, Communications Director for the Spanberger Campaign, reached out to RVA Mag to talk about the video saying, “Attacking her for being a substitute teacher is ridiculous. Abigail has nothing to hide, she received top-secret security clearances based on her background, experience, and integrity and faithfully served our country for over a decade as a federal law enforcement and CIA officer.” He went on to say that the ad was also based off of information that was “illegally disclosed” by the United States Postal Service in a freedom of information act request made by an organization affiliated with the CLF.

Beyond the veracity of the CLF’s claims, this is an obvious attempt to drum up anti-Muslim sentiment as a way to score political points. According to FBI data released in November 2017, religiously motivated crimes against Muslims made up 25 percent of all reported hate crimes, which was a marked increase from the year before. Pew Research released a study about the rise in anti-Muslim hate crimes in July 2017; among other things the study said, “Overall, Muslims in the United States perceive a lot of discrimination against their religious group, are leery of Trump and think their fellow Americans do not see Islam as part of mainstream U.S. society.” This attack ad against Spanberger by the CLF only fuels this distrust and as the study went on to show is part of the reason why a third of Americans believe there is a “fair amount” of backing by U.S. Muslims for extremists or a “great deal”.

The PAC, known as the Congressional Leadership Fund (CLF), has links to Speaker of the House Paul Ryan, and according to the New York Times, has raised over $100 million for Republicans this mid-term.

While conditions surrounding the release of this information are still unclear, the Spanberger campaign sent a cease and desist letter to the CLF yesterday. The letter opens by stating, “I write as a former civil servant and as an American, in shock and anger, that you have tried to exploit my service to our country by exploiting my most personal information in the name of politics.”

“I am proud of my background and my service, and not ashamed of the information I submitted,” Spanberger wrote in the letter. “I have nothing to hide in my background. But, as any American in a similar situation would be, I am concerned about my privacy and security, especially the privacy of my Social Security number.”

Spanberger also wrote on her astonishment that a domestic political group would release sensitive, private information, including her medical records, and wondered whether the document was illegally obtained through a state-sponsored adversary’s cyber attack. She then listed three demands asking CLF to destroy the unredacted SF86 forms and to not disclose any further private information, then threatened legal action if these demands were not met.

The CLF, in turn, released a statement saying, “In a desperate attempt to prevent Virginia voters from learning about her record and background…Abigail Spanberger, today sent a letter to the Congressional Leadership Fund…threatening legal action over information about Spanberger that was obtained through legal channels.”

The CLF obtained the information from America Rising, another Republican research PAC. America Rising says they used a Freedom of Information Act (FOIA) request to acquire this information, receiving the full unredacted document from the United States Postal Service. According to BuzzFeed News, American Rising may have obtained Spanberger’s Social Security number through LexisNexis.

America Rising had been notified that the FOIA request had been forwarded to the US Postal Service three days after submission for processing, stating that certain information would be released “without consent from the individual.” However, according to the FOIA Exemption (b)(6), disclosing personal information about living individuals to a member of the public would require written consent from the person whose information they requested. Any government agency must withhold information that would clearly be an unwarranted invasion of personal privacy.

Communications Director for the Spanberger campaign Justin Jones reached out to RVA Mag saying, “What I can confirm is that there is no legal way to obtain an unredacted SF86.”

Jones said the Spanberger campaign first became aware of the document leak in early August when one of their staff members got a call for a poll; one of the questions asked would you support Spanberger “more or less” if you knew she “taught at the Islamic Saudi Academy.” This piqued their interest in a potential leak, and Jones acknowledged the only way this information could be acquired is from the SF86 form.

Later, at an event on Aug. 16, a reporter from the Associated Press confirmed they got the information from the CLF on Spanberger, which included her un-redacted SF86 form.

Indeed, this is one of the claims now being used by the CLF to attack Spanberger. Their statement released yesterday said, “[The form] included information about Spanberger’s tenure working at the Islamic Saudi Academy in Northern Virginia.” The Islamic Saudi Academy of Washington was an international school funded by the Embassy of Saudi Arabia, located in Fairfax – Saudi Arabia is a long-standing ally of the U.S.

Spanberger told RVA Mag that she only worked at the school for “several” months as a substitute teacher. Jones also said this was while she was waiting for her security clearance process to be completed, adding “they’re weaponizing something which is a degradation to our veterans and military members, it puts our national security at risk.”

The Virginia GOP has already run with the information and has tweeted about Spanberger’s time spent at the Islamic Academy saying, “the manual for the Islamic school you taught at requires that all female students wear hijabs and never wear shorts even when exercising. Were similar policies in place when you taught at the Islamic Saudi Academy?” – a blatant anti-Muslim dog whistle. 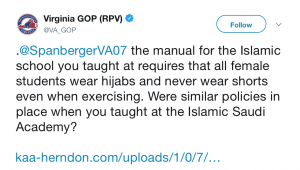 In a statement sent to RVA Mag, Spanberger reiterated her claim about the egregiousness of the leak, saying, “I am proud of my background, my service and the work I did to keep this country safe, and it is outrageous that the Congressional Leadership Fund, Speaker Ryan, and Rep. Brat are so afraid of losing an election that they would resort to these disgraceful and likely illegal tactics to try and find or create controversy – where there is none – regarding my personal background.”

She closed by acknowledging that this is the broken system of politics that she is running to change.

*Madelyne Ashworth contributed to this report.