When women cyclists struggled to find gear without making special orders, the women behind Carytown Bicycle Co. took the situation into their hands — and made their own.

When Emma Troy, a mechanic at Carytown Bicycle Co., first started going on group rides, she felt like she had to be someone she wasn’t in order to fit in.

“For the longest time, there were not a lot of women to ride with,” Troy said, “In order to fit in with the guys and ride with them, I had to not ride like a girl. I had to bro up.”

Troy constantly made jokes at her own expense, and at the expense of women, because she felt like that was what she had to do to fit in with the men she rode with. Once she met other women who cycled, she realized she was going against what she had long stood for.

“I was like, ‘Whoa, I have been embracing toxic masculinity,’” Troy said, “and have been against what I stand for as a woman athlete. You don’t have to put down other women to be a cyclist. There is a space for us here in this industry — we just have to be loud about it and be proud about it. There’s a kit now that says it.”

The idea for the kit came from a couple who were regular customers at the store. One of them was getting more serious into triathlons, and needed better athletic equipment.

“She was the kind of customer you had to convince that she was worth the equipment she needs,” Shahan said. “A lot of women feel like they aren’t worth it since they aren’t professional athletes.”

Around a year and a half after Shahan started business with the couple, one of them told Shahan he saw a pair of Sailor Jerry socks that had “Fight Like A Girl” written on them, and suggested a similar design might make a cool t-shirt. They changed the phrase to “Ride Like A Girl,” and the doodling and brainstorming with Troy began.

“I came up with the doodle and it’s been tag-teamed with Erin,” Troy said. “We designed it, and Specialized [a popular bicycle clothing company] has a custom design vault, and they do mountain bike jerseys.”

After a draft for the design was created, Shahan sent it to group she rode with to gauge whether they were interested. They were.

A lot of cycling shops don’t stock many women’s wear options. The apparel they do stock, Shahan said, tends to be cheap, or only includes one or two high-end items. If a customer wants something else, the typical response from most stores is that it has to be special ordered. As a result, many female customers have complained about not owning any women’s jerseys.

It’s a complaint Shahan knows well herself. “Every other jersey I have is a men’s jersey,” Shahan said. “It wasn’t just the offering of this custom kit we were able to push for — it was to be able to offer a range of products for women to shop.”

The kit was designed by Troy and Shahan intentionally without any input from male employees. “It was just us two — we wanted to leave the men out and do it ourselves,” said Shahan. She wanted to pursue it on her own time because she enjoyed working on it, and she didn’t care what male employees thought of their design project.

A couple of co-workers raised questions about why mechanics designed the project, rather than their brand marketing specialist, Shahan said, but another male employee quickly explained it to them.

“He told him, ‘It’s because he’s not a woman,’” Shahan said. “It made me feel good, because I didn’t have to say it. They’re picking up what we’re putting down.”

Shahan and Troy also feel that awareness of women in cycling is rising in the industry in general — not just at their store. Bell Joy and Trek have been increasingly promoting female cyclists, and Specialized has been designing more women’s gear.

“The [cycling] industry is starting to realize that women have always been there,” Shahan said. “We are a viable market.”

The Ride Like A Girl kit will be ready by the end of November, in time for the holiday season. In the meantime, Shahan and Troy will keep helping diversify Carytown Bicycle Co. with their monthly women’s takeover of the Short Pump location.

During the takeover, only female employees staff the store for the day. This started after Shahan realized she missed working with other women.

“Emma and I were the only two women on staff for a while,” Shahan said. “Then we had a nice pop of female part-time staff that were hired on. It was nice to call other shops and talk to other women, and it was nice to work together.”

At a staff meeting, Shahan made a joking request that all the female employees from the different store locations get an opportunity to work together. Afterwards, one of the partners who owns the store texted her and told her they wanted to actually make it happen. Shahan then collaborated with Troy and the scheduling staff, and got the women’s takeover started.

Both Shahan and Troy enjoy the women’s takeover days because they feel more like they’re working with a team, rather than working by themselves alongside others doing the same. The women’s takeover has become a safe space, where Carytown Bicycle Co’s female employees can talk candidly about personal aspects of themselves — such as their menstrual cycle — without feeling uncomfortably aware of being the only woman in the shop.

“When the entire staff is female, customers notice it, and are willing to point it out,” Shahan said. “Not maliciously; no one has been demeaning about it. Women definitely notice it — they don’t always say something, but there’s definitely a little bit of relief that comes off a lot of women to see an entirely female staff.”

The women’s takeover takes place on the last Sunday of every month at Carytown Bicycle Co’s GreenGate Shopping Center location. Pre-order options for gear from the Ride Like A Girl kit can be found on Carytown Bicycle Co.’s website.

Last year, locals Alison McGrail and Cheyenne Burnham went to Charlottesville for a run when they started discussing biking the 52-mile Capital Trail, (which runs from RVA to Williamsburg) only to run into some trouble over how they would get back.

“We were trying to organize how we would do the whole trail without having to do 104 miles biking out and back,” Burnham said. “There really needs to be a transportation service, so we decided to do it.”

A few weeks later, they became an LLC and set an idea in motion that would later become Cap Trail Bike Shuttle. Cap Trail Bike Shuttle offers various trips and booking options to help everyone reach their destination. Riders can choose how far and what part of the trail they want to ride on.

McGrail and Burnham wanted to build a service that would help fellow cyclists, whether recreational or competitive, enjoy the 52-mile trail without having to experience the full trail twice in one day.

“The first person we contacted was Beth Weisbrod, the director of the Virginia Capital Trail Foundation,” said Burnham. “We reached out to her and got her blessing.”

Not only that, but the trail poses as a safe alternative to the increasingly dangerous roads claiming cyclists’ lives every year.

As need for the trail increased, need for safe transportation became necessary, and Cap Trail Bike Shuttle rose to meet the challenge. 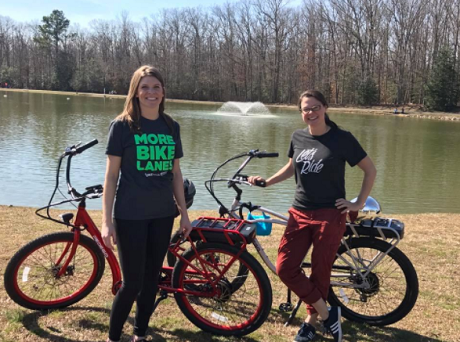 With the help of a 12-passenger van and a 16-foot-trailer outfitted to carry as many as 17 bikes, Cap Trail Bike Shuttle became the first shuttle to transport groups up and down one of the first inland routes in North America http://virginiacapitaltrail.org/.

McGrail and Burnham’s partnership began long before Cap Trail Bike Shuttle became an idea in their minds. They met within the craft beer community while McGrail worked part-time at the same local brewery that Burnham managed and planned local events for.

With McGrail’s knowledge of owning a corporate wellness consulting business and Burnham’s background in parks and rec and event planning, the friends began to exchange ideas and discuss a future business plan that incorporated both of their passions and strengths.

Now their shuttle operation is up and running with a van that carries a charming depiction of Richmond from t RVA Coffee Stain artist, Doug Orleski.

“We knew that we’d be the first out here and we wanted to do it right,” McGrail said. “We wanted to do a good job and get local partnerships involved, like the artist for RVA Coffee Stain.”

McGrail and Burnham continue their involvement with various businesses connected to the Capital Trail through partnerships with Anne Poarch’s Basket & Bike, Pedego Electric Bikes RVA, Bike Pals, and other bike tours and shops.

More businesses are popping up along the trail as traffic for it grows and gains attention from the community including Ronnie’s BBQ, Cull’s Courthouse Grill, and a new brewery that may be opening up at the very end of the Jamestown Settlement sometime this year.

McGrail and Burnham, they plan to add another vehicle for smaller groups and add more employees as they adapt to changes taking place on the trail.

Pickup and drop off locations are at Lehigh Parking lot, off of Dock St between Pear and Wharf Streets, Charles City Courthouse and Jamestown Settlement. Trips vary from 22 to 52 miles in length, but groups can book through their website, or call McGrail and Burnham directly at (804) 554-1894 for specific details.

With the weather warming up and much-needed sunshine, people are dusting off the old two-wheelers and biking around the city.
END_OF_DOCUMENT_TOKEN_TO_BE_REPLACED

Richmond’s only live late night talk show, RVA Tonight, which is presented by the Coalition Theater, brought to light the humor in all the hubbub and clamouring th
END_OF_DOCUMENT_TOKEN_TO_BE_REPLACED