Over the past six months, painter/sculptor Darryl Starr has been preparing for his forthcoming opening, scheduled for April of 2016. We last saw his work in October of 2014, at the now-departed Monument City Coffee and Records at Third and Grace Street. Fifteen-foot ceilings housed ten of his large, autobiographical abstract canvases (4’x6’, 5’x8’); a few of his smaller, more sculptural works greeted patrons from the front window display. Starr has been present in the Richmond arts community since the early 80s, first as a VCU student, later an alumnus professor, and always as a working artist. His curriculum vitae includes teaching at Pratt Institute, a residency at the Virginia Museum of Fine Arts, and early membership with 1708 Gallery (part of the first group admitted after the charter members). Much of Starr’s oeuvre summons a double take—dirt dumped on a gallery floor, sculptures made with processed meat… it’s sure to elicit an over-the-shoulder glance that sticks. He lives for the double take.

This article was featured in RVAMag #23: Winter 2015. You can read all of issue #23 here or pick it up at local shops around RVA right now.

What experiences and opportunities helped shape your early career? What got the ball rolling for you?

DS: Rodin, Bernini, Tapies, Ree Morton, Larry Zox, Schabel, NO TV, and New York City. My fifteen years in NYC, nine living with painter Larry Zox. We shared a studio near Union Square. He tutored me about the harsh, international art world, and exposed me to the world’s most vibrant art scene. Artists, parties, openings, bars in New York were things I had never and would never have experienced had I stayed in Richmond. Jaded. These are parts of the industry that VCU and 1708 Gallery never prepped me for… Zox advised me to trade my sculpture MFA [from] Alfred University in NY for painting, since 3-D work took up very valuable cubic feet and studio space. I taught myself to paint as I transitioned from everything I knew about form. Shape became my focus. I started combining both 2-D and 3-D into wall works, and then eventually just the canvas. Somehow I always felt painters stopped the process too early so I added 3-D elements. Today I’m always surprised if I make a picture with only paint. 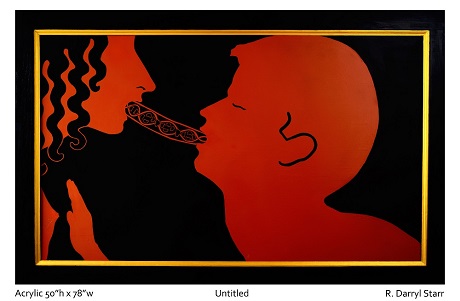 In his new series, which is untitled as of now, Starr’s autobiographical bent takes an acidic-yet-sweet turn. The lot consists of large paintings, sculpture, and hybrid works that outdo any cocksure imagery he has used to date. More tongue in cheek. I assure you, this isn’t just a nasty old man show; although the viewer is inundated with references of blatant vulgarity, these proceed in an oxymoronic fashion. His representations come off as over-sexualized and exploitative, but Starr uses these devices to make a satirical point against the way Western culture has situated the female form and mind—a chronology of the voluptuous as told by our favorite marine vet/sculpture professor.

DS: I try to capture the argument for or against the absolutes in life with paint. You might not believe me, but my paintings are actually healthy references to women. They are really about celebrating and glorifying the most fantastic emotional experiences within my relationships. The work is NOT an objectification, but a celebration. It shows the history surrounding this pattern of representation, hits on my involvement within it… I do admit I was on it for a little bit, but ultimately shoves in your face that a 66-year-old artist like myself can stick his head above regressive culture.

Few men of your demographic and background play with this idea. What brought you to reflect upon past and modern sexuality in terms of Western culture? 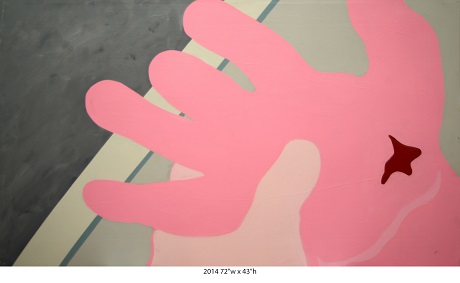 Erotica in art is hardly new. It’s as old as the little short fat chick from Willendorf (i.e. Venus of Willendorf). For me, my sensibility of the erotic really began at convoy. Three dollars of “funny money” and a small wait was all you needed for sex in a war zone. Later down the line, I was represented by Wilhelmina Models for thirteen years. I found the sophistication of NYC’s modeling world, with its simmering sexuality being sold and bought using modern standards of beauty, exhausting. Just walking into Wilhelmina offices, one can feel the sexual energy exuding from this subset of people. Personally, I always felt the cheesy modeling factor balanced the glamour. It did pay extremely well, though. Tradeoffs, like money (not always money), make the world go around. Between $3 prostitutes and Park Avenue, I embraced a personal aesthetic reflected in my work that wants to dispel beauty, good design, and marketing. It became important to express ideas without the components of successful artwork. I began engaging many references and images probably regarded as not quite there. People could tell the work was informed, but not well manufactured. I was able to dispense the idea and chase of “nice” work.

From what I’ve seen of the completed and in-process pieces, Starr continues to extend a hyper-awareness of plane. Detected in planar faces, scene-scapes, architectural offerings, circumferences, and a locked glass casing—these subtle constructions balance his erotic iconographies. The new work can be seen as an ode to the present shift away from Freudian and patriarchal absolutes in visual culture, coming from an individual who matured in the midst of these ideologies. Starr reflects upon the variability of personal relationships, and how modernity and popular culture are now, more than ever, pushing the status quo. Speaking of repressive constructs such as sexism or racism, Starr boils it down to, “keeping open the possibility that it is beautiful to love all kinds of people in varied but equally meaningful ways.”

What might distinguish this series, procedurally and/or thematically, from the rest of your work?

DS: The willingness of women to assist me with the new work. I’ve never solicited for ideas like this before.

Could you elaborate on this? And how would you respond to someone who takes a misogynistic message away from your work? 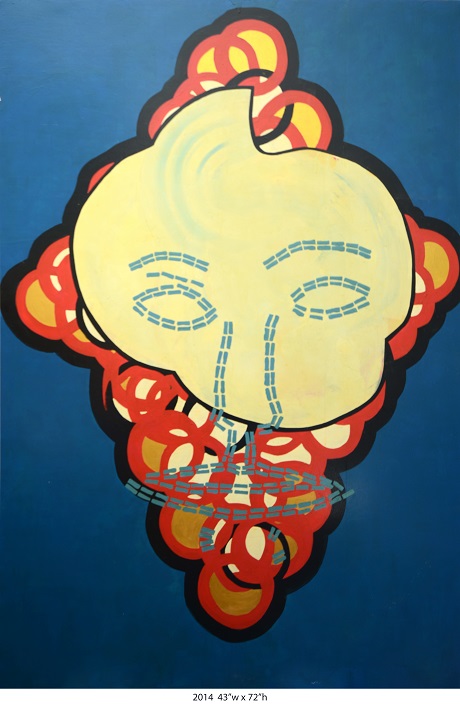 DS: First of all, I encourage any sort of attack because without questions, art is not worth it. Shock value is cheap, and an easy tool to rely on. What I am trying to do is circumvent shock without being modest. The response I’m getting from women, to give me their underwear, in supporting the idea of the show—I have never had women involved like this in my work in such a supportive manner, both in material and good wishes. Their feedback is so important. I surveyed many across a few generations, asked if the imagery is offensive, and the overall response has been very positive. I’ve never had the opportunity to solicit ideas and opinions from women in my art, or include a feminine mindset in my work to this degree, if at all. It’s important to really deal with issues that go beyond myself; my work has made me evolve in a way, and brings a whole new element of consideration that is being attributed to the project.

Do you have any comments on the way different generations esteem portraits of sexuality?

DS: Up until this point, I had not considered the ramifications of these ideas regarding generational perspective, and these works opens doors for such dialogue. I’d say that millennials are much more secure with their sexuality. This generation has tapped into something quicker, a bypassing of cultural or social hang-ups that, from my experience, only seem to waste time and/or incite difficulties within relationships. I have never before stopped to inject those things into my art, where before I blindly made my work without regard for commenting on the cultural and social morés around me. I think lots of artists have become isolated that way.

How did you not pick up on these topics as an educator?

DS: I just accepted it. I was there to teach. I never worked with the big-picture connections of these cause and effect relationships in my work. Compartmentalized art ideas have really lost their value; it’s all the same, but here we are at the forefront. It’s 2015. If I continue to further consider audience demographics, I wonder how the work will change.

You had mentioned that for your forthcoming opening, you are going to act as your own gallerist. What is the impetus behind bypassing a gallery setting?

DS: I will start by mentioning that the curation and presentation of my last solo exhibit was in a coffee shop, Monument City Coffee and Records, when it was on Grace. Beautiful, open space… the walls fit the work, which is large. The space had a constant clientele, as well as people in and out, travelling, so I knew the work would be seen. There were couches, tables and a mezzanine—places to comfortably interact with the work, or see it from different vantage points.

It has become apparent to me that options to exhibit my work, especially locally, are slim to none. Why would that stop me from making shit? I work every day, and I still like to poke the public in the eye. So then comes the question: how can I get my work in front of viewers? I create my own gallery, duh! Sadly, BUDGET limits me to a narrower scope.

Have you come up with any solutions?

DS: As of now, yes. I’m putting together a venue that depends on factors beyond my world. Money and legal issues are a hurdle right now. I want to rent a piece of equipment to use as my gallery. Parked on Broad Street for a First Friday opening. Like a “one man band” driving force that excludes censorship, commissions, and certain viewers. This way I have total control of the work and its presentation. No hoops to jump through, or technicalities that inhibit the work. I acknowledge that such a scenario may allow very few people to see my stuff–but the exclusivity is a thrill. Bring your I.D.

What kind of response do you expect from this opening?

DS: Response to my work has gradually become less and less supportive. Galleries, especially in Richmond, don’t see my work as viable to sell, especially to corporations that have a specific formula that makes sure nobody can be offended beyond color choices. Considering the strikeouts—as with the VMFA fellowship program, and countless other application-based opportunities for reward money—I must be making what I feel is good and challenging art. Do not get me wrong, I have sold a piece or two in my 40 year career, but I think it was more like a mercy fuck. Guilt, not resonance.