United Blood Festival is making its way back to the Canal Club this April 6 and 7 for the 12th year in a row, and the just-announced lineup has people losing their shit. The headliners are just the beginning–the broader lineup as a whole reflects the strength and richness of Virginia’s hardcore tradition.

Virginia has cultivated a following when it comes to the strong music scene that caters to any individuals’ personal music taste. With the current Virginia is for Music Lovers campaign showcasing the many different bands and styles of music that we have to offer, the amount of music that comes out of the state has been staggering.

The music that has the most enduring local tradition, however, is the hardcore and punk scene all around Virginia, especially in Richmond and Virginia Beach. This music reigns supreme because of its pure grit and intensity. The scene itself has also become a family; people are proud to love what they love and proud of the music their local scene is putting out.

United Blood acts not only as a hardcore festival for well known bands to play, but also a showcase for the bands that have came out of Virginia and thrived. This year’s edition will feature headliners including Turnstile, Twitching Tongues, Backtrack, Madball, Death Threat, and Take Offense.

This year’s United Blood lineup also features some unforgettable reunions. Local Richmond band Count Me Out is making a headlining appearance, their first since the band split in 2003. They’ll appear alongside another first-time reunion set from Pennsylvania hardcore band Shark Attack, who released one EP in 2001 before breaking up soon after.

Bands such as Papertrail (VB), Break Away (RVA), Nosebleed (RVA), Division of Mind (RVA), and Candy (RVA), just to name a few, are also putting Virginia on the map. Even bands like Vein, who has worked closely with Richmond bands, including releasing a split EP with local band .gif from God, have created a fanbase and friendship within the Virginia hardcore scene.

Check out the full lineup on the poster below: 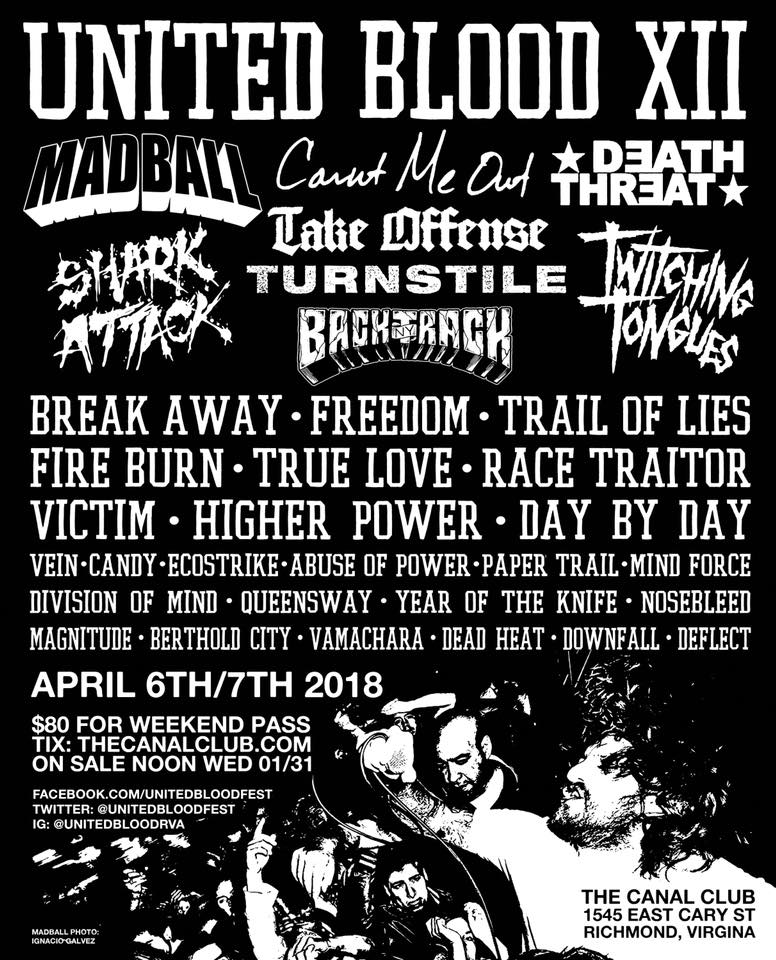 This insanely stacked festival will make its way to the Canal Club stage for an all-star weekender on Friday, April 6 and Saturday, April 7. Tickets go on sale Wednesday, Jan 31 at noon–click here to purchase.