Clad in maroon, hundreds of supporters gathered in Richmond today for the National March for Justice and Reformation. The march, planned on the birthday of Marcus-David Peters, was according to the event organizers a way to hold “elected officials and police departments accountable.”

Peters, a VCU graduate and a local high-school biology teacher, was killed by the Richmond Police Department (RPD) in May of this year at the intersection of highways 64 and 95. Experiencing a mental crisis and naked at the time of the shooting, Peters’ death was eventually ruled an “act of justifiable homicide” by Richmond Commonwealth’s Attorney Michael N. Herring: a claim consistently refuted by his sister, Princess Blanding, who leads the Justice and Reformation For Marcus-David Peters movement.

Gathering at VCU’s Siegel Center, the march organizers (including Monica Kelly, who leads the university’s Amnesty International chapter, and Rev. Antonio Redd from Second Baptist Church West End) led the crowd in chanting “help, not death” and “justice and reformation” — both of which have become a rallying cry of the Justice and Reformation movement.

Speaking first, Kelly questioned why the city has not implemented the Marcus Alert. The alert is one of the core demands of the movement, which would allow a mental health professional to act as a first responder to a person in mental health crisis, reducing the chance for violent escalation with the police.

Redd spoke after Kelly, proclaiming, “We are gathered to march for what is right,” and also acknowledging that Peters cried out for help, but “help was not found.” Addressing the lack of response from VCU, Richmond’s mayor and city council, and the Jefferson Hotel, where Peters worked, Redd claimed that their “silence was complicit” in the circumstances which led to the biology teacher’s death.  He finished by saying it was time to put the city’s elected officials on notice, and that the message they were sending was not an “empty threat.”

Taking to the streets after the initial speeches, the marchers maneuvered down Broad Street before turning onto Belvidere, chanting “shut it down” and “help, not death,” eventually stopping in front of the Jefferson Hotel. Before he was killed, Peters stopped at the hotel and was seen on video acting erratically with other hotel employees. On a platform in front of the hotel, Rev. Lacette Cross from Restoration Fellowship RVA addressed the crowd, calling for “accountability of police and elected officials,” a theme that was consistent throughout the day’s speeches, but not before reminding the crowd that there is “no such thing as a single-issue struggle.”

Before the crowd continued their march towards the RPD Headquarters, poet Rob Gibsun took to the stage. In a powerful address, he spoke about the “undue response” from the university (VCU) where Peters was an alumni, the retreat to our individual “comfort zones,” and the role in the “killing of brown and black people.”

Eventually coming to a stop in front of RPD headquarters, Dr. Ravi Perry, a political science professor from VCU, took to the platform. Acknowledging the complexity of modern law enforcement and how that intersects with the death of Peters, Perry said, “The justice system has impacted our lives, both good and bad,” calling for a greater police accountability that is “seemingly absent.” To make his point further, he told the crowd a story about how he was victimized by police in his native Ohio, being taken out of his parents’ car and held at gunpoint for 20 minutes because he “fit the description” of a drug dealer. “Its a day that reminds me every day that I’m a black man,” he said, after reminding the crowd that police have already killed 852 people in 2018 alone.

Princess Blanding spoke last, thanking the crowd for their continued support and solidarity. Addressing the marchers, she asked why tax dollars pay for the police to have tasers, batons, and pepper spray, but are so quick to use lethal force. “I’m not anti-police,” she said, “I’m pro-black lives matter. I’m pro-brown lives matter. I’m pro-immigrant and I’m pro-LGBTQ.” Calling out the city’s leadership, Blanding said, “We voted them in, we’ll vote them out,” finally demanding that the city implement the Marcus Alert and a civilian review board to oversee the police.

The march ended with Redd leading the crowd in singing happy birthday for Peters in front of the RPD — he would have been 25 years old today.

Some of the best photos from the National March for Justice and Reformation can be found below:

Protestors from Charlottesville and throughout Virginia flooded Justice Park near the city’s Downtown Mall today in preparation for the Ku Klux Klan rally originally scheduled at 3 p.m. this afternoon.

Groups like Showing Up for Racial Justice (SURJ), Antifascist of the Seven Hills (ANTIFA), Black Lives Matter (BLM), and the Charlottesville Clergy Collection all gathered around the monument of Stonewall Jackson to protest the appearance of the group – known for the murder, terrorization, and intimidation of African American communities.

Accompanied by whistles, megaphones, horns, and a large brass band that played music for nearly three hours the counter-protesters remained motivated and engaged for the duration of the rally. Although the Klan had anticipated 80 to 100 members to appear, no more than 30 members surfaced to protest the pending removal of the Civil War monuments, which were voted by the city to be removed this past April.

The Klan members only remained in the park for around an hour while shouting phrases like, “white power,” and were met with opposing chants such as, “Racists go home.”

Eye-witness accounts suggest that around 20 people from the counter-protest were arrested attempting to block Klan members from entering the designated rally area. Other than these arrests, the counter-protest was an otherwise peaceful gathering, which included upwards of 300 or more people.

Nonetheless, a heavy police presence allowed Klan members to enter and exit the park unharmed while ensuring order throughout the surrounding area. During the event, police were fully equipped with riot gear and automatic weapons in preparation for any potential incident. Although arrests were made, the police mainly contained their activities to crowd control.

RVA Mag’s inside look at some of the most impactful photos of the day can be found below: 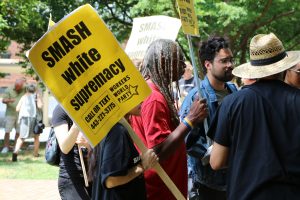 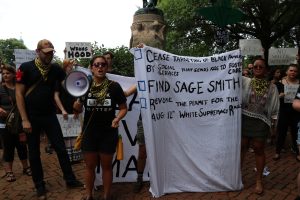 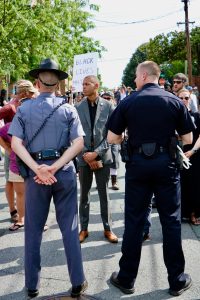 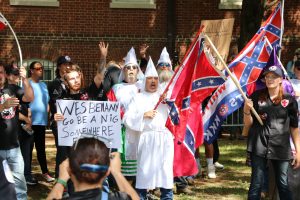 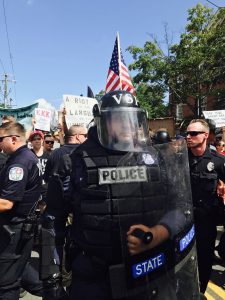 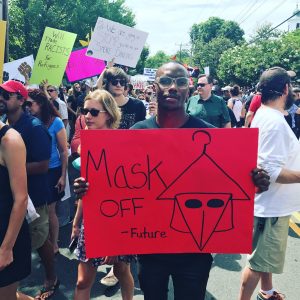 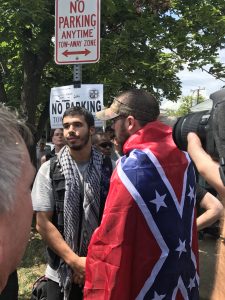 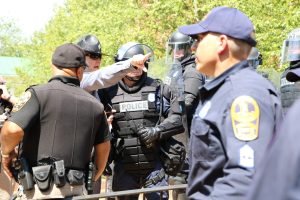 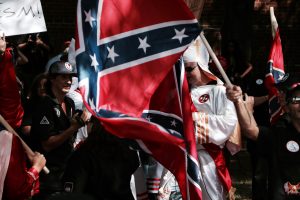 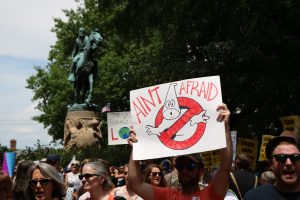 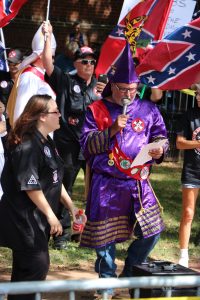 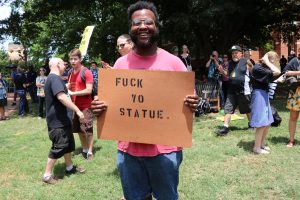 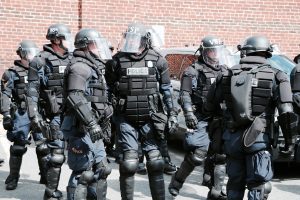 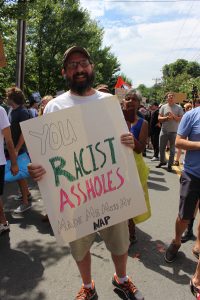 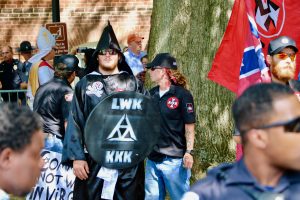 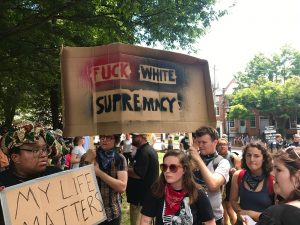