I looked down at my hands, finally, away from the stage as the play ended — and realized I had crushed my flimsy, disposable cup between my fingers until it was just twisted plastic in my bare hand.

It was this visceral reaction that carried me through Act One and Act Two of Firehouse Theatre’s Desire Under the Elms this past Saturday. Eugene O’ Neill’s 20th-century play is a tale of love, lust, madness, and desperation, and I felt each separate emotion move through me as the story progressed.

Landon Nagel and Amber Martinez were heart-wrenching in their portrayal of Eben and Abbie — the twisted love and chemistry between the two was enough to make the audience audibly gasp, time and time again.

Nagel, in particular, was extraordinarily skilled at slipping from anger and violence, to love and joy as he struggled with his attraction to Abbie, his father’s new wife, and her initial covetousness for the farm that once belonged to his late mother.

Martinez played the manipulative, complicated Abbie effortlessly. There wasn’t a single point in the play where she was an actress playing a character. She was Abbie, even when Abbie lied to her husband, seduced Eben, even when she killed her own child. 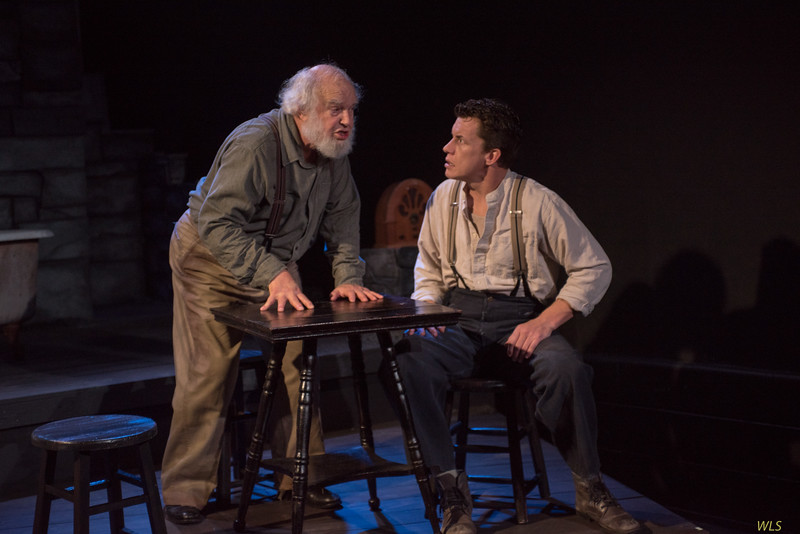 The director, Josh Chenard, wanted the audience to not only watch and hear the play, but also to feel it. I can confidently say that he succeeded in doing just that. The insanity, the bitterness, the lust — it was all tangible, it all simmered right at the surface of the story.

Chenard’s decision to move the play from the late 19th century to the Great Depression was highlighted beautifully by the music he chose for the performance. The timeline of events, however, was a bit difficult to follow. Time passed by without any mention in the play — in one scene Abbie had just moved in, and in the next, she was pregnant. These jumps made the play a bit hard to follow at times.

Nevertheless, the raw emotion and the wonderful dynamic between every single character was always present. The relationship between Eben and his gruff father, Ephraim, played passionately by the stately Alan Sader, was strained and fearful.

Eben’s relationship with his two brothers, Peter and Simeon, portrayed by Adam Turck and Chandler Hubbard was also twisted in its own right. Still, the three brothers succeeded in communicating the love between them despite their harsh circumstances.

To be frank, the Firehouse Theatre’s production of Desire Under the Elms is not for the light-hearted. But if you’re looking to experience and feel drama, not just observe it, then this play is worth a watch.

The play still runs through Nov. 5, so you still have some time to check it out. Tickets are $15-$35 (excluding service fees) and you can purchase yours here.

The set is bare-boned, simple, roughly hewn. Soft white lighting pours over actor Adam Turck’s shoulders. As he balances a rake between his hands, he repeats a string of words over and over, perfecting the New England accent that will carry him through Act One: “fuck you, fuck you.”

Looking around, no one but me is giving Turck’s impassioned performance a second glance. There is an easy camaraderie between the actors and crew within the Firehouse Theatre’s black walls. Raucous laughter, shouting voices are constant. Still, there is an underlying intensity, a dedication that is obvious before the actors have even begun playing their parts.

It all fits. Even this simple rehearsal, the cast’s first run-through of the play, it fits – harmonizing perfectly with Eugene O’Neill’s gritty tale, Desire Under the Elms. The play, written originally in 1924, is a raw masterpiece rooted in love, lust, loathing, madness, and murder.

This is O’Neill’s attempt to adapt elements of Greek tragedy, primarily the myth of Phaedra, to a rural New England setting. These themes are as old as time, but Richmond director Josh Chenard is giving a new twist to his own adaptation.

“I moved this play from the original time period in the 1890s to the Great Depression,” Chenard said. “I felt that the themes were better suited aesthetically speaking for the 1930s.”

The powerful emotions and inspirations behind the story, however, remain the same.

“This is a forbidden love story,” Chenard said. “It pulls from the Greeks and their sense of longing, loss, fear, and desperation that is present in so much of their theater.”

Desire Under the Elms is the story of three brothers living on a remote farm – struggling to survive on the land, but living for the beauty of it. When their father, Ephraim Cabot, comes home with a new, young wife named Abbie, the brothers Peter, Eben, and Simeon plot to keep their inheritance.

“The ancient Greeks had no subtext,” Chenard said. “They said exactly what was on their minds. All these strong emotions are right there on the surface, and O’Neill has written the dialogue with such poetry. There’s something about the way he writes that is so rich, so moving.”

And this raw, aching emotion is thick in the air throughout rehearsal. There is nudity, violence, anger, and love bursting at the seams of this piece, but the most remarkable part of Desire Under the Elms is the chemistry between Eben and Abbie.

Landon Nagel, who plays the tragic Eben, struggles with his attraction to Abbie and his loyalty to the land throughout the play. He plays Eben with an earnestness and sadness that draws you in. Amber Martinez, plays Abbie just as skillfully – she is talented enough to make you loathe her and fear her within the first few minutes of the play.

The emotions on stage move very quickly. Nagel thrashes on stage, screams until his face is red, and in the next moment is just as gentle and unsure. His performance is outstanding — albeit without a doubt is extremely challenging in the intensity of his character.

“Eben is broken, he’s caged,” Nagel said. “Not in a way that he is trapped, but in a sorrowful, very painful way. This is a tragic struggle for happiness for him. He feels like an outsider in his own home, he is tied to his past and the death of his mother. And then comes along Abbie, who is dangerous in her own way.”

Chenard, as a directing method, encourages his actors to channel their own personal experiences with emotions such as desperation and love as they play their roles. His hopes for the audience are similar.

“I want the audience to empathize with these characters and their emotions,” he said. “I want them to think about all the times they’ve fallen in love, then out of love. I want them to feel that pain, heartbreak, and loss in death that the characters experience in the play. So often we see and hear theater, but we rarely feel theater.”

Nagel, a Richmond native, also hopes to help the audience feel the rawness of the play, and attributes the starkness of the performance to Chenard.

“I want them to feel the grief, loss, and hope that Eben feels as they watch him,” Nagel said. “There are so many forceful emotions here. With Josh, we get to make the play about what’s expressive and artful, and see how far we can push the envelope on these emotions. We let go of what it should be and just let it be what it is.”

Jane Mattingly, the dramaturg of Desire Under the Elms, also emphasized the connections she anticipates the audience will make with the play, soon to be open to all audiences.

“This story is special in its timelessness,” she said. “Home, family, lonesomeness, desperation – it’s all familiar. You go to {the} theater to feel connected to things, and to the characters on stage. That’s what this is all about.”