Durham, once a center of Black Wall Street (along Parish St), is now known as the Silicon Valley of the South. Due in part to the collaborative project American Underground, Durham boasts an excellent startup community as well as Moogfest, the new home for the once Asheville-based music fest devoted to all things synthesizer.

The fest plays out like a multi-day conference with speakers and talks by day and cutting-edge musical performances at night. The event not only pays tribute to Robert ‘Bob’ Moog, the inventor of the famed analog synth, but also stays true to the cultural diversity alive and well in Durham today.

“Before, in Durham, if you were a Black man getting into trouble, you got killed or sent to jail,” said Marshall Jones as he hosted the panel on Music and Tech: Tools to Fight Mass Incarceration. “If you want to start somewhere in your community to enact change with music, look to a local outreach center. I went to the local Big Brothers Big Sisters and look what happened.”

Jones, co-founder of the Sound Cartel and Give a Beat, was not only a panel host but a Moogfest performer.

He doubled as a house DJ on Friday and a speaker fighting against mass incarceration on Sunday. More artists of color were also dually involved in the festival such as DJ Bosslady, another Durham house DJ.

“In this city… actually, I haven’t any heard of other female DJs in [Durham],” said Felisa Renee Scott, better known as DJ Bosslady and the creator of Black Diamond DJs. “Ladyfingers lives out in Pittsburgh but I think she does a lot of things out in the Chapel Hill area. They had a lady DJ in downtown Raleigh but I think she was from out of town too. I don’t think I’ve met anybody else [but] it will be six years for me in November [having moved down to Durham].”

Prior to moving down to Durham, Scott was from Newark, NJ. Being new in town, she also founded the Durham House Music Meetup in August of 2016.

“I was on there and I guess from my profile on Meetup it sent a little advertisement that said ‘Hey you like house music! 50+ other people in your area in Durham like house music.’ So I’m like, people in Durham… like house music? I don’t know where these people are but I want to find them,” she said. “I thought it was going to take me to a meetup or website where I can join and when I clicked next, it said thank you for organizing. I thought I could show up, hang out and go home- no organizing.”

Scott performed at Moogfest as DJ Bosslady as part of the Four on The Floor event. Several house DJs played back-to-back sets at a bar, Arcana.

“The Floor asked me when they came to me at Mosaic Line Lounge a couple months ago,” said Scott. “I had played with them before. Whenever I schedule a meetup, I’m not always playing. I just put it up at different house events because I go support other people. So when The Floor has their [residency] at Arcana, I put up a meetup for there.”

In line with Moogfest’s longstanding themes of Future Thought and Future Sound, Scott shared that she believes the future is women. To that effect, she (and myselfy) were particularly excited to catch Princess Nokia‘s set at part of the festival. 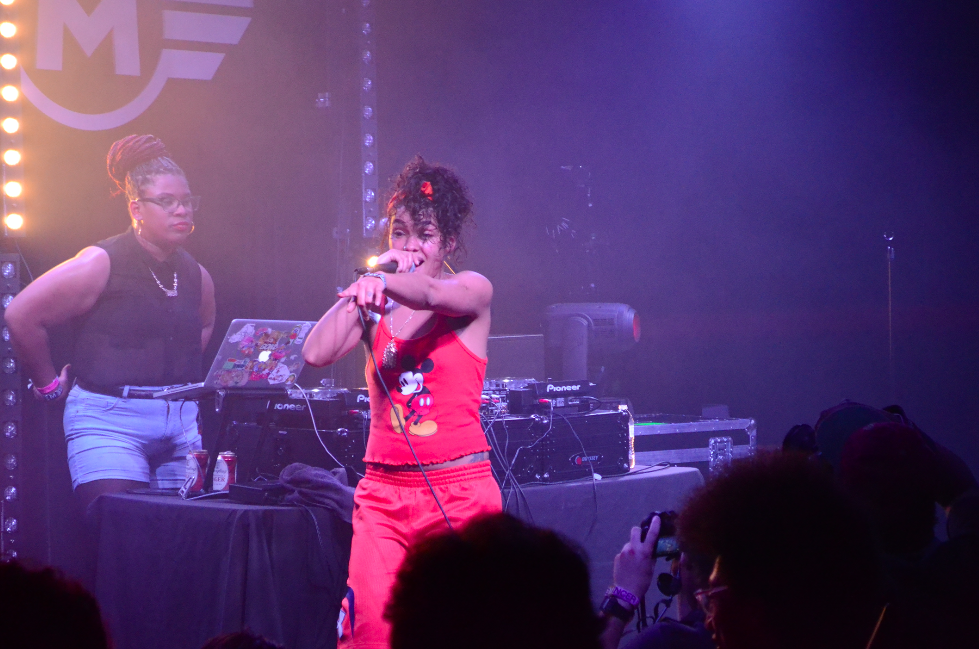 Nokia, along with the internationally acclaimed Flying Lotus, shared their music with packed audiences at local venue Motorco, which offered both indoor and outdoor venues for the weekend. Both artists were also scheduled to give masterclasses and discussions that expanded on the themes of Future Thought and Future Sound.

The multicultural and inclusive feminism shared by Destiny Nicole Frasqueri, aka Princess Nokia, prompted marginalized audience members to come forward to her; “All my queer women of color come to the front of the stage!” said Frasqueri, the rapper behind the song “Tomboy.”

Her masterclass with Yasmine Dubois, better known as Lafawndah was held in the Carolina Theatre.

Flying Lotus gave an introspective talk himself whilst being hosted on Comedian Hannibal Buress’ podcast at the Carolina Theatre as well.

“If I cared about the analytics of my music and got into the numbers, man I’d kill myself,” said Flying Lotus. “My new shit is going to be inspired by… hm. I don’t know if I should say,” said Lotus, being interrupted by an audience member that screamed say it! at the top of their lungs. “My new shit is very Vangelis inspired. I don’t know if y’all know who that is.” At the prodding of Burress, Lotus answered many questions on his growth with music, acid trips, work with Thundercat and his movie Kuso, which “may hit some theaters soon.”

“I haven’t watched the movie yet,” said Burress, a comedian who has a speaking role in the film. “I didn’t want to watch it by myself!”

Flying Lotus would go on to give an ear-splitting, lung-deflating and ego-shattering performance at the Motorco venue based in unreleased music, You’re Dead bops and some Kendrick Lamar for all the niggas that needed to know it would be alright.

From Future Thought sessions like Black Futures, Comics and Community and Possibility/Protest in African American Roots Music to Future Sound performances from King Britt at Surf Club and Sudan Archives (top image) at First Presbyterian Church- there was no shortage of Moogfest paying homage to the innovation set forth by Durham’s Black Wall Street.

There was no shortage of diversity, inclusion and authenticity in the future imagined by all the musicians, engineers, professors, media and Moog-heads, alike.