At the Capitol Bell Tower on Friday, the Youth Climate Strike drew over 300 protesters who left their jobs and schools to demand climate action from legislators.

The U.S. Youth Climate Strike brought an estimated 300 demonstrators, who joined a global movement to raise awareness for climate justice ahead of the Youth Climate Summit Saturday and the United Nations Climate Action Summit that starts Monday in New York.

Climate strikes were held all over the world. From Uganda to Berlin to New York and Richmond, the streets were swarming with people concerned over climate change.

In Richmond, signs waved by young, fresh faces read: “It IS easy being green; You are the FOSSILS we are the FUEL; We want our hopes and dreams back.”

The strikes have been organized by youth who say they do not want to stand by while their planet — and their futures — are ruined.

Activists warned of the impending ecological disasters due to climate change.

The youngest to stand behind the small podium was a Clover Hill Elementary student who introduced herself as “Sophie.” Other speakers included high school student organizers, a teen poet, a 60-year-old biologist from New York, and eco-villagers who live a sustainable lifestyle on Virginia communes.

The resounding message was fear: fear of their future. With the United Nations predicting ecological disaster as little as 11 years from now the students expressed their concerns for the safety of the planet.

Kids of all ages missed a day of school to attend the strike. In New York, over 1 million students were excused from classes.

“I’m here because the climate is something we need to build legislation on and it’s not doing so hot right now, and so we need to get our voices out to the people in power,” said teenager Ciara Graves.

At home, Graves and her mom eat a vegetarian diet and try to live a minimal-waste lifestyle, including composting their food scraps.They said they hope to make positive environmental changes on a small scale.

It wasn’t just teens taking action. They were joined by a large showing of Virginia Commonwealth University students and people of all ages. Richmond resident Emily Kimball and her friends were looking for a way to celebrate her 88th birthday and decided to attend the climate strike together to promote awareness of climate change refugees who have had to flee their homes due to the effects of the changing climate.

For those who stayed at school or work, a second event at 5 p.m. was organized by Extinction Rebellion Richmond. Following a gathering at Monroe Park, the group planned to march to the state Capitol.

This was the third time the group hosted events in Richmond this year. In March and May, around 30 people attended each event.

It is fitting that University of Richmond (UR) announced the launch of its beekeeping program, complete with two hives on campus, during National Pollinators’ Week. In a recent press release, the university explained the hives are being installed in an effort to improve local ecology, as well as provide research opportunities into the bee populations’ rapid decline.

“We want to rethink the way we engage our students with these issues and encourage them to develop solutions that we can then pilot,” said UR sustainability director, Rob Andrejewski, in the press release. “There is a level of awareness and critical thinking that goes into it that helps students steward our land, which leads to the thriving of plants and animals.” 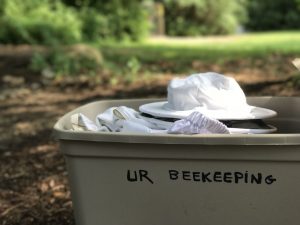 Photo by University of Richmond

However, there is a more pressing reason why UR is emphasizing research into bees. For some time, bees have been disappearing from their hives at an alarming rate, this phenomenon is known as Colony Collapse Disorder. It starts when a massive amount of worker bees depart the hive, leaving only the queen and a few nurses. When this happens, the hive cannot sustain itself and eventually collapses and dies.

This phenomenon has the ability to dramatically influence the stability of local and global food-sources. The United States Department of Agriculture claims that “Colony Collapse Disorder threatens not only pollination and honey production but, much more, this crisis threatens to wipe out production of crops dependent on bees for pollination.” The use of bees accounts for almost 80 percent of all crop pollination and is a $15 billion a year industry. Nevertheless, without the use of bees, many crops that drive the agriculture industry cannot be produced, which can ultimately cripple the economy.

Colony Collapse Disorder is not the only reason why bees are disappearing. The Environmental Protection Agency cites misuse of pesticides as another cause of bee deaths. While the United States is not at the stage of a ‘silent spring’ or a point of no return for the bee population, people should remain concerned.

“The reason honeybees are such great pollinators is they are crop-specific,” said Martha Kiene, vice-president of Northern Virginia Beekeeper’s Association, in a recent interview with RVA Mag. “They’ll work that crop, whatever it is, until it is done for that day. You’ll have thousands of bees on that one crop.”

Kiene said that honeybees are one of the driving forces of major food exports, specifically almonds and apples, which the United States sends around the world. “The almond industry has been estimated to be about a $6.4 billion crop for the United States. We supply 80-85 percent of the world’s almonds. Almonds are strictly pollinated by honeybees.”

But the way agriculture is changing is contributing heavily to the disappearance and death of great pollinators like honeybees, Kiene said. Monocropping, the practice of planting one crop on a massive plot of land rather than several different crops, is also narrowing the variety of pollen bees are receiving. Therefore, honey variety is decreasing and the genetic modification of seeds and plants are affecting how bees pollinate.

Monsanto, in particular, has bred seeds with pesticides inside of them to prevent insects from feeding on them. Although pesticide companies claim that this is not a reason for colony collapse, biologist have tracked up to 150 different kids of chemical residues in bee pollen.

Another important factor contributing to the deaths of many bees are aggressive pests, such as the varroa destructor mite. “It’s a little tick basically, a mite, that lives in the hive,” said Kiene. “They have been thought to suck the blood, but now they think they’re sucking at an organ that’s responsible for the physiological processes that go on in the bee. It multiplies like crazy.” 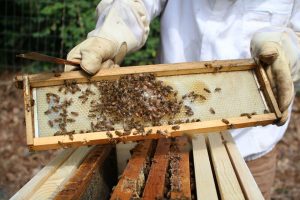 Photo by University of Richmond

Joe Essid, who oversees one of UR’s writing centers and will be one of the bee keepers agrees that the time is right for greater conversation over the ecological impact of colony collapse.

“I think it’s important for institutions like the University of Richmond to become a model to other community organizations because the crisis is great,” said Essid in UR’s press release. “The more community hives we have and the more exposure people have to honeybees, the more aware they’ll be about what each of us can do in our own backyards.”

Kiene and Essid both emphasized educating people on the importance of bees and how to maintain their health. Awareness is key when it comes to maintaining the health of pollinators. Kiene recommends planting bee-friendly native flowers, trees, and shrubs that also bloom in the fall and summer. But most importantly, she recommends using pesticides responsibility during the evening when the bees are not active.

Local beekeeping associations around the commonwealth can be found here.