Hawaii-by-way-of-California artist Ekundayo was in Richmond over the summer for the 2014 edition of the Richmond Mural Project. Ekundayo’s history is complicated, and the effect it had on his life is a central influence in his art to this day. As a child, his parents split up, and without his mother’s permission, his father left Hawaii with 5 year old Ekundayo in tow and went on the run. Ekundayo’s father passed away from cancer when he was 11, leaving him in the care of his sister’s mother. Meanwhile, his mother had never given up on finding him, and the Department of Justice finally tracked him down and reunited him with his mother when he was 13.

In the meantime, Ekundayo had developed an interest in art, spurred when he found his uncle’s graffiti sketchbook. His family encouraged this interest, and it was with their help that he eventually attended California’s Pierce College. He was later accepted into Art Center College of Art and Design, but dropped out after completing foundation classes in order to find his own career path.

Today, Ekundayo merges his formal education in art history with his love of graffiti and street art to create unique works in multiple media, including acrylic, gouache, watercolor, ink and various carving techniques. He’s painted many murals in his dual homes of Hawaii and Los Angeles, as well as in many other locations around the world, always attempting to further his positive message through his motto: Sorrow Becomes Joy.

We were able to catch up with Ekundayo while he was in town for the Richmond Mural Project, and he shared with us his thoughts about traveling and the importance of family, among many other things. 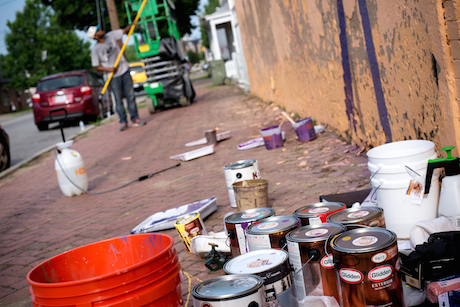 You’re from California, correct? Or am I wrong about that?

How did you get linked up with Shane and the Richmond Mural Project?

I’ve been working with Shane since 2010. The first time was out there in Art Basel in Miami. He hit me up, and I’d seen all the awesome murals that have been going up around the city. I really wanted to be a part of it, so when the opportunity arose I jumped right on it.

What were you doing at Art Basel? Did he bring you there or were you there already?

He brought me to Art Basel. We did a small show, did a mural collaboration with Pixel Poncho back then. That was real fun, and it was a real cool event.

How long have you been doing actual walls? Were you a graffiti kid before, or were you an artist that just transitioned to walls?

So I started out doing graff, probably in the 7th grade. What happened was I found a black book that my uncle had. I was never really into art so much, and when I saw that [book], it just completely blew my mind. I had never seen anything like that before. So I copied every page, and I was really into it. I got immersed into the culture–you know, hip-hop and all that stuff along with it. And from there, I was just doing my graff. I realized I could go to art school, and I wanted to transition. I was always kind of a character dude at heart, so it was an open avenue for me to start going to art school and learn about figures. It just kept going from there.

So your uncle’s black book, did it have his art in it?

Absolutely. He was from a crew out in LA, CHB, and it had all his art in there. He got into some trouble and got arrested, so he wasn’t in the house anymore. I found his black book in the attic; it was all these crazy illustrations of these triangle heads and guns and all this cool shit that you’re into at that age, and it just blew me away. That was something that really resonated with me, and I just wanted to re-create that feeling. 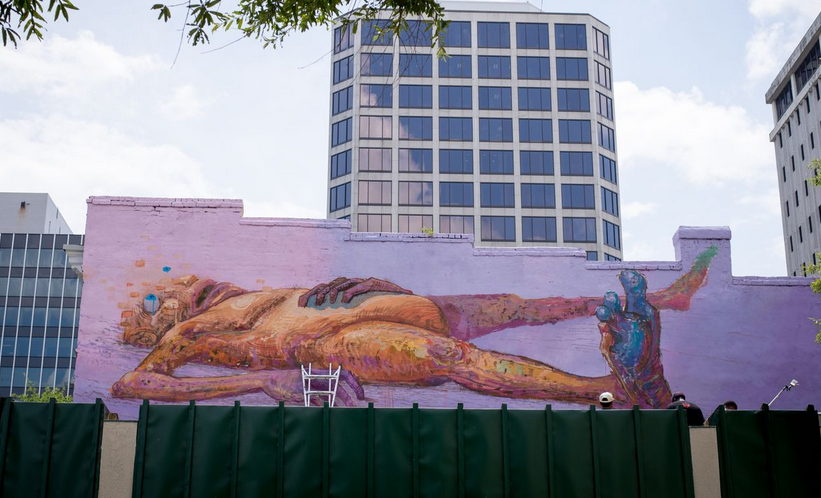 Has he seen your work since you’ve blown up?

Yeah, he’s a huge supporter. He always trips out.

What does he think about these giant pieces that he sees that you’re putting out?

He loves it. He’s all into it. He actually still is creating art that’s a bit on the abstract side of things, but he’s doing his thing and still getting busy, and is a real creative dude, so he’s all for it. He’s one of my biggest supporters.

Seems like you’re everywhere. How busy are you this year, and are you getting busier as it goes along?

This year I’m getting really busy. I got a solo show up coming up with Think Space at the beginning of next year, so that’s gonna be my big thing to work on for the rest of this year. And then, really just doing more walls and murals. I’ve been really into doing them. I just finished one in LA that is a little over a couple of stories. It’s real fun. I really enjoy working outside, building these walls. I love working with the community and having people interact. That’s the dope thing about Richmond. The vibe out here is very supportive, and you can tell that people out here are seeing things that they haven’t really seen before. And they’re really amazed, and that’s a great feeling. 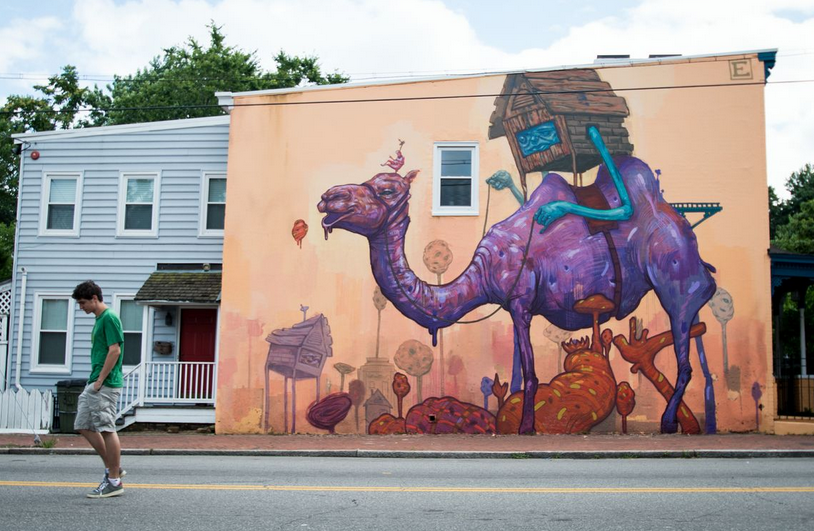 You’re in Oregon Hill right now. I’m sure people have been coming out and just checking out the work. It probably is a great feeling right now, inspiring the kids with this camel.

Yeah, the traveler. That’s what this piece is all about. Traveling the lands and planting seeds along the way, creating new growth as you go.

Definitely. I think that stuff that happens to us at a young age, whatever it may be, it has a strong impact. I feel like for me, I’m learning how to channel that even more so into a positive light. I’m very grateful for the things that happened when I was younger, because it allowed me to see things in a certain way and it gives me my special twist. So yeah, it’s definitely in everything I do, and it’ll continue to be in everything I do, for everything I create. As long as I grow, it’s what’s at the core of my point of view. Ideas change, images change, but I think the heart and soul of what I’m about is definitely like my name. “Sorrow becomes joy.” That’s what I represent and I’m living proof of that. I went through the sorrow, and I’m going through the joy, just like everybody goes through little sorrows and joys all throughout life. It’s all the ebb and flow of how we live.

Absolutely. I know that’s how I connect through your work. I appreciate the artistry of it, but I think it has a real humbleness to it, and a creativity. It’s like you’re creating these worlds where all these strange characters live, and you’re putting that on walls.

Yeah, it’s like, all of that. It’s a little bitter, a little sweet, a little sad, but I like to think at the end of the day it’s still all good, no matter what happens. 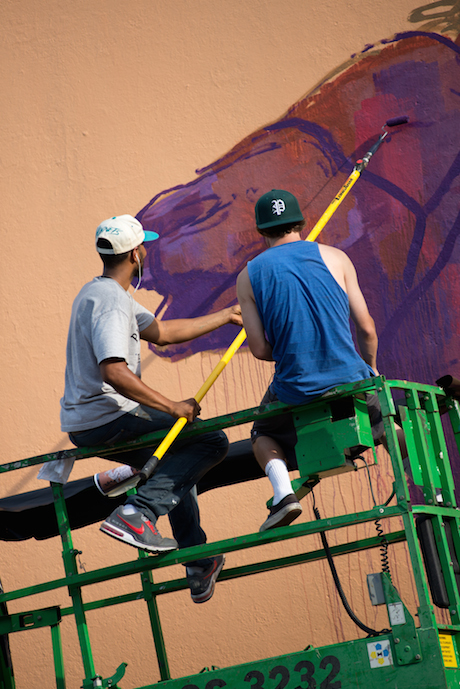 Are there other artists that are here that you’re looking forward to seeing what they’ve put up? Who are you following in the mural world?

For me I’d probably say the European cats, the Swiss cats [Onur & Wes21]. I’m really excited to see what they do, purely because they come at it from a different point of view. They’re from a whole other country, so it’s really cool to see how they do things, and I really enjoy that. I feel like the lineup this year is cool, just like it is every year really, and I’m really happy to be a part of it. I’m stoked to see everybody get down. The only thing about it is I’m stuck at my wall so much. I wish I had time to go around and check everyone’s stuff out.

Everything has an end and the Richmond Mural Project is no different. Check out the photos. Follow the @RVAmag instagram and tumblr. Get in all the action the instant it happens. Oh, and make sure to see these guys paint before its all over on Thursday night…
END_OF_DOCUMENT_TOKEN_TO_BE_REPLACED

The Richmond Mural Project 2014 (#RMP2014) has begun, and the incredible Marc Schmidt went around the last few days and grabbed some shots of some of the muralists in action.
END_OF_DOCUMENT_TOKEN_TO_BE_REPLACED