Visiting grandmother’s house was a weekly ritual in my family. Every Sunday we went to church, dinner, and then to grandma’s quaint little cottage just outside of town. Don’t get me wrong, I love my Grandma, but I dreaded these visits. Sitting on plastic covered furniture, being overwhelmed by the smell of mothballs, making small talk about the weather, it just wasn’t how I would choose to spend the day.

When I was younger, before my sister disappeared, we would play in the yard together. She was my best friend through most of my young childhood. She had curly golden hair that bounced in the wind and the brightest blue eyes I have ever seen. We would chase each other around the cottage, take turns jumping over the small stream in the backyard, picking wildflowers by the driveway, and climbing the oak tree out front. It has been almost 8 years since my sister seemed to just vanish from the face of the Earth. Mother and father told me that she must have gotten lost when she wandered off and we just weren’t able to find her. My family doesn’t like to talk about my sister’s disappearance for some reason. Now when we go to grandmother’s cottage on Sundays I just sit there, barely listening, occasionally admiring my grandma’s beautiful, antique cuckoo clock.

The meticulous woodwork of the clock is mesmerizing. The dark oaken edges of the clock wave and swirl in a wonderful cascade down the sides. The top is adorned with this golden crown of stars and sunrays. The front has two small windows and a little green door, much like my grandmother’s own small cottage. There is so much detail and decoration put into the strange clock. It seems so out of place here in present day Vermont, as if someone had plucked it out of the early 1800s. Now my grandmother is pretty old and somewhat nutty; therefore, she can never recall where she happened upon such an interesting piece of art whenever I ask her.

The small hands of the clock seem to move slower and slower the longer we are sitting in the living room. Mother and father are droning on about something happening at the local theatre next week. I couldn’t be more disinterested, but I have nothing to do but sit and nod along, hoping 6 o’clock arrives as soon as possible.

It isn’t all bad sitting and staring at the clock. It just looks and feels so magical. It seems to glisten, even in the shadows. It reminds me of a small, magical home that a fairy would live in. Sometimes if I listen really closely, I even think I can hear a quiet knocking coming from the inside, like someone wants me to open the little door. 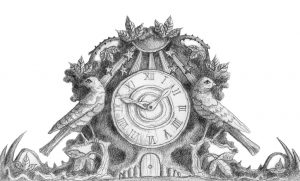 My grandma has always been a very quiet and relaxed woman. The only time I have ever seen her raise her voice or lose her cheerful temperament is when I was very young and I reached up to touch the brass pinecones that hung on shiny chains from the bottom of the clock. She ran across the room, scooped me up, and scolded me for trying to touch her precious clock. She warned me that I must never, under any circumstance touch the clock, fore it is very special. I think she’s so protective of it because it’s very old and probably worth a lot of money. My sister was lucky enough to be home sick with mother that day and didn’t get the same scolding.

Actually, several years ago, my sister touched the clock once. My grandma had taken mother and father into the other room to show them her latest quilting endeavor. My sister and I stayed in the living room playing with some old toys my grandmother kept around for us. The clock chimed on the hour, as it always does, and startled us. We watched in amazement as the little door opened and a little figure bounce out and recoiled back inside the clock a few times. It was amazing. The room filled with music and wonder for that brief moment. When the show was over, the clock seemed to go back to its resting state, and the room settled. My sister, being ever so curious, didn’t get a good look at the figure and climbed on a chair to peak inside. I told her that we were warned not to touch the clock, but she told me I was foolish to believe what grandmother said since she was old and crazy.

She pulled the tiny doorknob of the little green door and giggled with excitement when she was greeted by the little figure. She said it was a spooky looking little man with a little top hat and a cane. She said he seemed to be looking right at her with an evil little grin on his face. When I tried to peer over her shoulder to get a glimpse of the figure, my sister slammed the door, jumped from the chair and yelled in my face, scaring me half to death.

My sister quickly resumed playing quietly on the rug before my grandmother returned to the room, so she wasn’t discovered breaking what seemed to be such an important rule. I’m glad I didn’t touch the clock though, grandmother is very sweet and I wouldn’t want to upset her.

At last, it is time to leave! The old cuckoo clock roars to life, chiming along to an old song that must be from ages ago. I jump up to leave, dragging mother and father along with me toward the door. As I turn to wave goodbye to my grandmother before departing, I catch a glimpse of the end of the hourly cuckoo clock show. The little figure is retreating into the clock, and the door seems to slam shut as the clock once again falls silent. I had never noticed before now, but the little figure my sister described looks nothing like the one in the clock. It is actually a little girl with curly blonde hair and brilliant blue eyes. She has this really twisted look of terror on her face, as if she is in tremendous pain. It seems like a really odd choice to place such a creepy figure in such an old, beautiful, magical clock. I don’t know why my sister lied about what she saw in the clock. She was probably just trying to scare me.