Storm clouds gathered around St. Paul’s Episcopal Church as faith and community leaders prepared for their press conference on Tuesday following an earlier meeting with Lt. Gov. Justin Fairfax and his staff on the Mountain Valley and Atlantic Coast pipelines. When the cameras started, though, the mood of the press conference was sunny.

“It was a very positive meeting,” said writer and attorney Jonathan Sokolow, who opened the press conference flanked by a dozen members of a variety of local activists, religious, and environmental groups, under the church’s exterior hallway.

“They were all very attentive, they took notes, they listened very carefully, seemed impressed with not only the factual information, but the human element that folks who are in the frontline communities fighting these pipelines brought to the table.”

Fairfax’s stance on the MVP and ACP has often stood at odds with Gov. Northam’s, who has continued to allow Dominion Energy’s construction work across multiple state lines and over a thousand rivers and streams, despite increasing outcry from the public, state lawmakers, and his own policy on renewable energy. 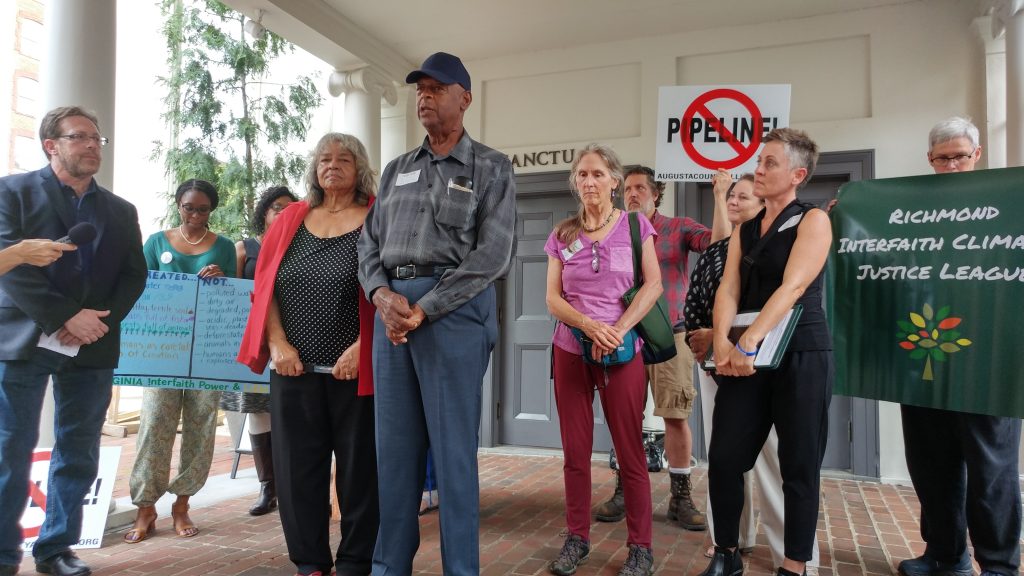 The meeting, organized by Beth Deel of the Roanoke City Democratic Committee and Preserve Bent Mountain, wasn’t solely focused on convincing Fairfax to take greater action against the pipelines. Among the topics discussed was a planned natural gas compressor station for the ACP set to be constructed in Union Hill. The Buckingham County district was founded in the 19th century by former slaves, and maintains a majority black population to this day. While Northam has not addressed this controversy, he had voiced concerns about a compressor station to be built near Mount Vernon in Maryland, which was later canceled by Dominion.

The cancellation of the Union Hill compressor station was one of three detailed requests made by the delegation to Fairfax, alongside further appeals to Northam and immediate, public condemnation of the pipelines. That delegation was led by Pastor Paul Wilson of the Union Hill and Union Grove Missionary Baptist Churches, and included Deel, Swami Dayananda of the Light of Truth Universal Shrine at Yogaville, Trish McLawhorn of NRV Land, Air and Water Watch and Union Hill landowners John and Ruby Laury, who farm on their property.

“We definitely have concerns about emission controls and the contamination of our air and water and ground,” said John Laury, who lives “three-quarters of a mile” from the proposed location for the compressor station. While he admitted that the question of how Union Hill was chosen for this project remains unanswered, Laury said he appreciated the chance to have his voice heard by Fairfax.

“We’re taking time because we do cherish the air that we breathe, and also the water that we drink,” Ruby said.

The Laurys were two of several speakers to stress the racial implications of the pipelines, in addition to their social and economic costs. Special attention was made during the conference to the continued role of indigenous populations in Virginia, West Virginia and North Carolina in “environmental justice,” as well as the tree sitting protests along the planned paths of construction that have been the subject of scrutiny from local law enforcement and anti-terrorism agencies.

Noting Union Hill’s historic significance to the state, Chair of the Environmental Climate Justice Committee of the Virginia State Conference of the NAACP Karen Campblin said: “This intrinsic value in our state is being overlooked and just being tossed aside for the sake of private capital gain.”

“We have communities that are being unheard and we ask that our elected officials listen to us and do what is right.”

As it turned out, Fairfax wouldn’t be the only political figure to be involved in the day’s events. House Representative Mark Keam, D-Fairfax, would make a surprise appearance near the conference’s end, disputing the “incorrect facts” provided by Dominion and other groups on the pipelines’ effects, and the population size and racial makeup of Union Hill’s residents.

Congressional candidate Jennifer Lewis was also in attendance, and shared her experience as President and founder of pipeline opposition group Friends of Augusta, her work documenting the effects construction has had on four potential stream crossings, and how this activism has shaped the public’s response to her campaign in Virginia’s 6th district for the better.

“This is not a Republican or Democrat issue, this is a life issue,” Lewis said. “This is their livelihood, they wanted to pass this on to the next generation and now they can’t.”

Members of the delegation and speakers at the press conference will be attending an event held by The Poor People’s Campaign at the First Universalist Unitarian Church in Richmond on September 26. Registration is free and open to the public.