Tonight, Gallery5 hosts the opening reception of art show “Liminal Alchemy” in conjunction with RVA’s First Fridays. The show is a collaboration between three Richmond artists who use a variety of diverging forms, media, and materials to explore ideas of perception and reality, as well as “the transitional and artificial nature of surface and identity.”

Artist Tamara Cervenka said it was about finding the common ground in their work, which despite superficial differences, has an undercurrent of unity and cohesion. “It really came together organically,” she said.

The exhibit exists in tiers of abstraction, as it transitions from Cervenka’s work to fiber artist Michael-Birch Pierce and painter Jane Winfield. “It’s almost like this sort of unwrapping of something,” said Cervenka of the exhibit. “[You go] into the room where Jane is and it’s a whole other world of complete abstraction.”

Despite the contrast of style, Cervenka and Birch-Pierce found commonality in some of the material. As Cervenka experimented with bones and animal pieces, Birch-Pierce said that furs and leathers are staples of his works in this showing. Likewise, nature plays a heavy influence on Winfield’s pieces, a testament to her work’s fluidity and dimension.

“The Alchemy is the whole melding of all the different elements together,” said Cervenka. “Between the three artists, it really did feel like an alchemy, in itself. Not just the materials…all three of us really just took these elements and put them through a rigorous process to make them into something new.” 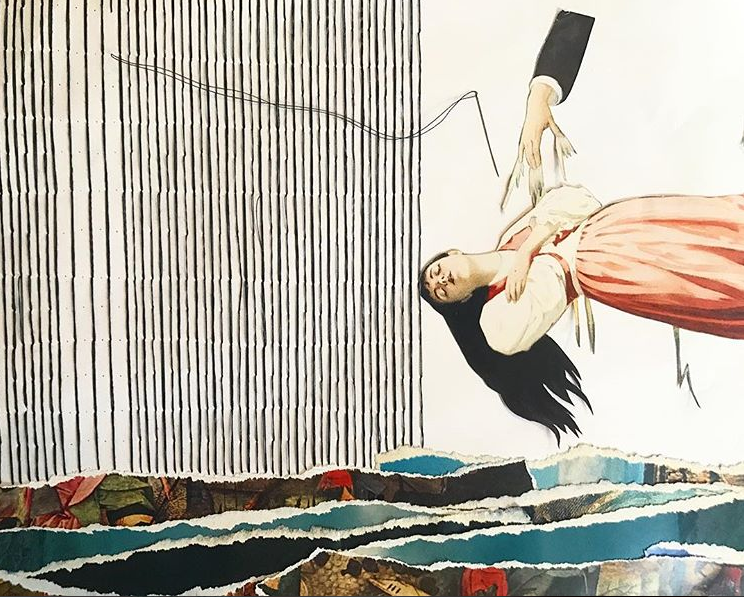 Cervenka is a mixed-media artist. She creates collages and sculptures, sometimes using them to deal with issues of feminine expectation and projection. “In the most recent stuff I’ve been doing, there has been a story. The stuff that I make now is so much more alive to me, so much more important, than anything I’ve made before.”

Using materials like images from vintage pornography magazines, and 1960s housewife periodicals, she juxtaposes them to explore the “hypocrisy and the absurdity” of expectations placed on women. “There’s a lot of universal imagery in my work,” said Cervenka. “There are these associations that people carry with them with these very specific images. I kind of like the idea of people making their own stories with these images.” 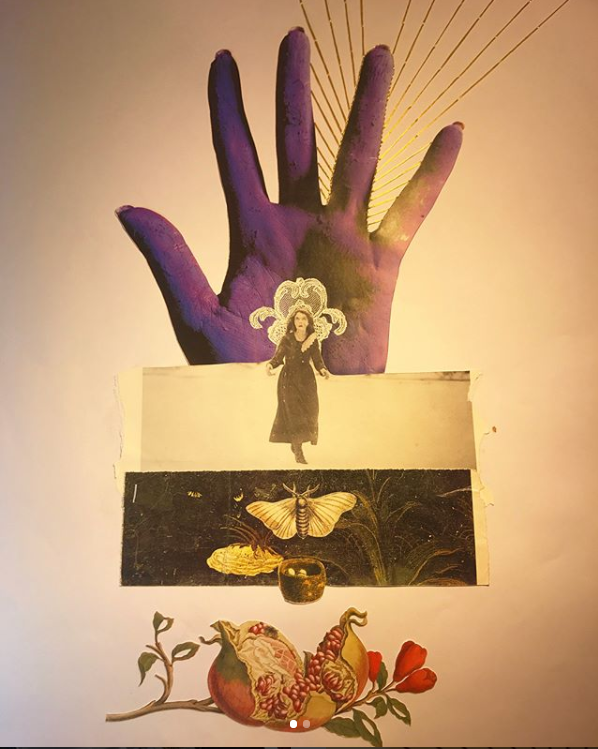 Birch-Pierce is a textile artist and adjunct professor in fashion design at VCU, with a background in couture embroidery and fashion design and embellishment. “My work is all a re-contextualization of that medium,” said Birch-Pierce.

“My research in graduate school was all based on identity, was all based on artificiality. And all of my work is about the sense of self, sense of gender, sexuality, and identity, public-self versus private-self, and how all of those lines and boundaries between people and identities blur together,” said Birch-Pierce. “I get to focus on the things I love about fashion, the things I love about the creation of objects, and get to ignore all the bullshit I didn’t.” 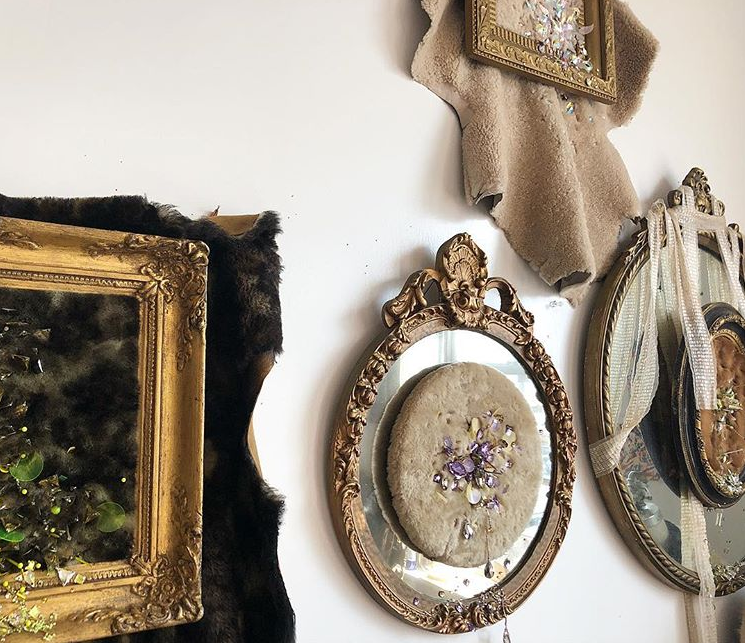 Winfield, whom RVA Mag interviewed in 2017, also likes to remain unlimited by the boundaries of any medium. Her work is an eclectic mix of materials and found objects, often inspired by the world around her. “I use everything from my two-year-old son’s toys to thick, moldy paint to flowers from the kitchen. Clay, baseball display cases, tree branches…you name it, I’ll see what I can do with it,” said Winfield. “I think it’s a poor artist who blames their tools. I also think that you have to be inspired by everything that’s around you, and I certainly am.”

Winfield said she likes to work outside as nature and uncontrollable elements often act as inspiration. “Eventually, I can choreograph these mistakes that have happened over time to create really, really specific surfaces. And I’m always just trying to control the uncontrollable, which is fluidity.” 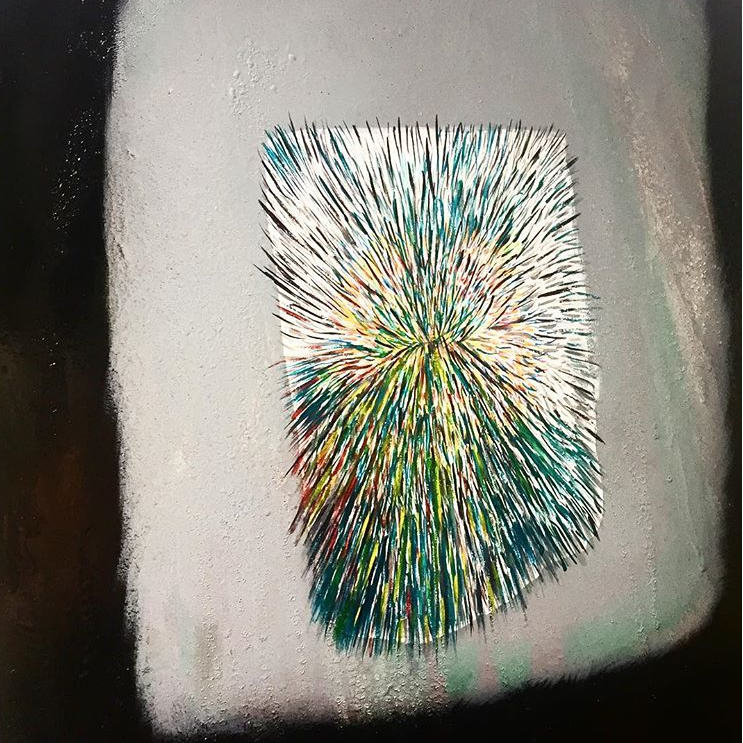 Like Cervenka and Birch-Pierce, Winfield uses this show as a chance to skew expectation, and to encourage, even if just for a little while, a shift in perspective.

“My goal is usually to make something that’s hung straight look like the walls are crooked, for just a second,” said Winfield.  “I don’t expect anybody to get some sort of epiphany or cerebral, prophetic thing happen to them when they see art, but I do want abstraction to be friendly, and I think the best way to do that is to be playful, and I think the best way to be playful is to try to turn things on its head. If for some reason someone wanted to straighten the picture out, then I think I hit my goal.”

The art show opening starts at 7 p.m. and goes until midnight at Gallery5’s gallery, live music, and marketplace location at 200 W. Marshall St. The show runs through March 28.