As the FIFA World Cup approaches its final match, people around the world are united through a love of soccer, awaiting with fierce anticipation as France goes head-to-head with either England or Croatia, to be determined during today’s 2 p.m. match.

It’s a scene anyone can relate to: a dark bar with darker beer, cramming too many people into a too small pub, all eyes glued above them to that one TV that will either crush their dreams or grant their only wish today–a win. Being in London for England’s World Cup matches is both the authentically familiar and romantically foreign football experience, and it all begins with where to go. A ticket to a watch party with a huge jumbo screen? Cheering on your team at home with friends? Sipping on a beer at a local pub? I opted for the pub experience, because it doesn’t get more British than that. 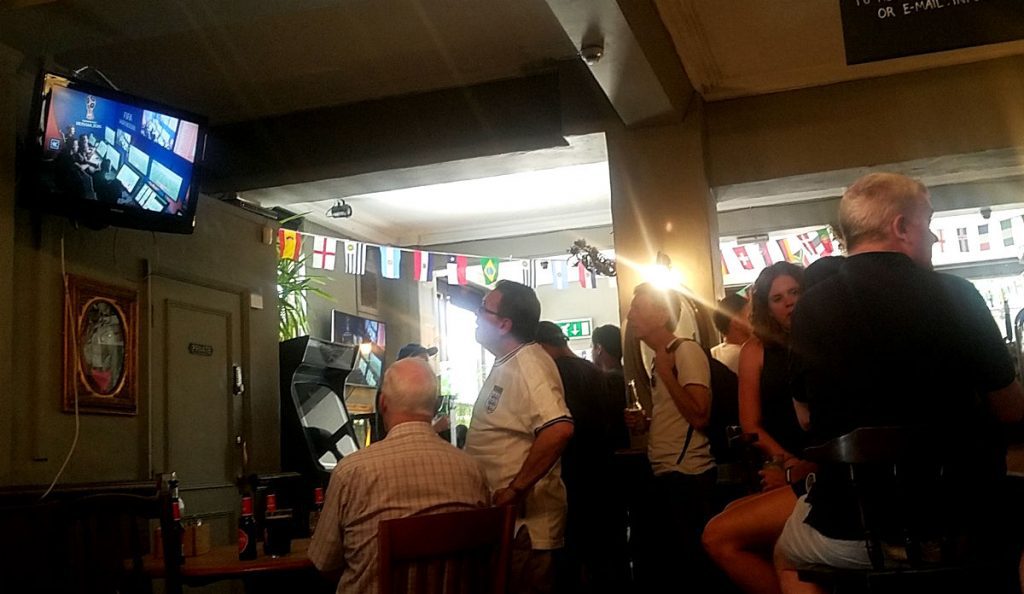 In England, you may choose between two types of pub experiences, depending on what you want. You can go to a trendy or posh pub that has a more adventurous menu, more beverage options, and can set up a huge projected screen to watch the game; your other option is to go for the standard working man’s pub that will only have typical gastro foods (ie: fish and chips, meat pie), a few brews, and maybe a ten-year-old TV or two up in the corner. The standard pub experience is hard to beat, as it harkens back to decades of Brits watching their football teams play. They’re the people that yell and curse for a bad attempt on goal or cheer and sing along for any well-timed, well-executed play. You find people who have watched their team for years and could tell you anything you wanted to know about a player. The atmosphere is tense, exciting, and a little magical.

“Come on, boy,” one Londoner says to the TV while clutching his beer. A moment later, another man loses his composure to shout, “Let’s go! Let’s go!” as England makes several attempts to score on Sweden. Fast forward 30 minutes into the game when England finally makes a goal, sending all the viewers into hysteria. The older bar guest beside me turns to me and says, “English fans aren’t very forgiving people.” Although there is some praise, criticisms about the English player who just scored, his teammates, and his coach fly around the bar with reckless abandon. The football match was not quite as exciting as the England vs Colombia match just days before, a game England won only through penalty shots. In the wake of the exciting win, this pub’s bartender gave no quarter to his team, saying that in the Columbia match, “[England] is shit, but the birds are quick.” As the third youngest team playing in the World Cup, I can see how inexperience is a factor in some British players’ performances. 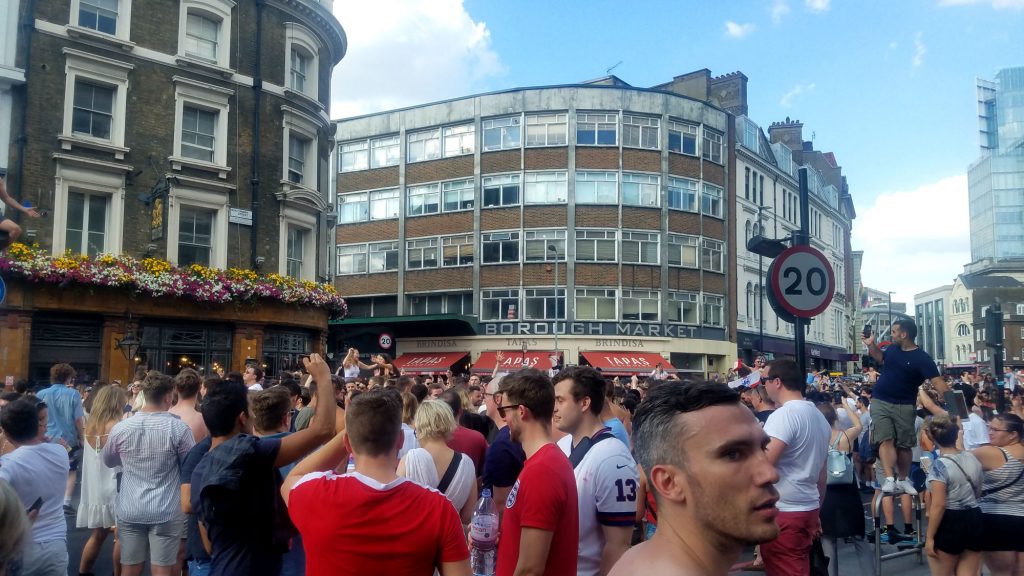 As the second half is about to begin, I make my way back to the pub after stepping out to cool off (the pub full of people and has no air conditioning). Minutes later, England secures another goal against Sweden, giving them a 2-0 lead. The entire pub feels brighter, as patrons shout, “There we go, boys!” One of the patrons orders a round of beer and shots for his table to celebrate the lead.

Before I had a chance to finish my ale, the match is over and England moves into the Semi-Finals. Everyone cheers and sings “Football Is Coming Home,” by a group called the Three Lions. The song is an anthem dedicated to England’s efforts to reclaim the World Cup since their last win in 1966. Eventually, the bartender puts the song on over the speakers to drown out the patrons’ loud, off-key singing.

After leaving the pub, we only walk a few blocks down the street and suddenly hear crowds of people chanting for England. Traffic in both directions is stopped, as people have poured onto the streets from various pubs and watch parties to celebrate this momentous win. English flags emblazoned with the three lions are proudly being waved, people are climbing sign posts, and police are gathered for crowd control. Strangely enough, the police are willing to hold up traffic for celebrators as they, too, silently enjoy the excitement of the moment and the satisfaction of the win. Even the cars and buses sitting in traffic honked their horns in celebration.

It was quite the day to be a visitor in London for a one-of-a-kind football experience–the kind of experience that almost made me feel like a local.

Look for more World Cup posts on Chloe’s blog, Adventure in Travels, where she’s blogging during her European vacation. All photos by Chloe Fortin.