The newest chapter of the fast-growing Drag Queen Story Hour movement comes to Richmond’s Fountain Bookstore for the first time on Saturday, March 14.

Childhood can be rough. Inner conflicts fuel external confrontations, which only make the inner conflicts worse. In the hallway and at recess, adult-taught slogans celebrating individuality are undermined by peer-to-peer condemnation of any difference from the norm, no matter how slight. This problem, which exists for many kids, is exponentially worse for LGBTQ youth.

Enter Drag Queen Story Hour. DQSH was started in 2015 by San Francisco writer Michelle Tea. It has since grown, boasting over 50 official chapters across the United States and overseas. It has also steadily drawn the animosity of the grown-up version of schoolyard bullies. Their accusation? That DQSH represents that Gay Agenda, of course. That by accepting the basic humanity of those with gender expressions outside the narrow confines of heteronormativity, children are in grave danger of embracing their inner fabulousness.

According to Todd Reazor and Austin Sweigart, who are in the process of bringing DQSH to Richmond, the program is really a literary vehicle for self-acceptance and inclusivity. “We see DQSH as a way to show inclusion, diversity, and expression,” they said. “Showing families and children that having differences is okay can make a world of difference.”

Three years ago, Sweigart and Reazor moved to Richmond from Pennsylvania, where they were both involved in advocacy for LGBTQ rights and visibility. When a friend started a DQSH chapter in Reading, PA, they fell in love with the project, and found it to be a perfect fit for their own Gay Agenda.

“We’ve both been passionate about advocacy within the queer community,” they said. “As a result we started a business, #GayAgenda, that focuses on creating LGBTQ-inclusive environments. We knew that DQSH was a great way to provide educational and inclusive family events.”

While they were in the process of locating potential venues in the Richmond area, Kelly Justice, owner of Fountain Bookstore, was meeting the Global Program Director of DQSH at a conference. When Justice returned home, she reached out and offered her shop as a venue, and the Richmond DQSH was born.

LGBTQ youth have a rate of attempted suicide that is 1.5 to 3 times higher than their cisgender, heterosexual peers, and this statistic is impossible to divorce from the fact that they are disproportionately targeted for bullying. A culture of relative secrecy when it comes to LGBTQ identity only further isolates LGBTQ youth – in too many places, there just isn’t substantial access to openly gay or transgender role models for children. For Sweigart and Reazor, DQSH is a step in combating this inequity.

“With both of us growing up and being raised as boys for the majority of our lives, something like DQSH could have shown us that we are normal, and fine as we are,” they said.

But DQSH is also about the stories themselves. Stories express the beauty of individuality, and demonstrate the limitless potential of imagination. They also have the potential to show us new ways to see ourselves. The act of reading out loud gives further weight to this possibility – instead of isolation, reading stories cultivates community, validating our differences while underscoring our essential humanity.

“One of the best ways to improve literacy and get children to want to read is to show stories that reflect an interest or part of their life,” Sweigart and Reazor said. “At DQSH, we will read stories that parallel struggles and highlight differences. Stories will feature characters that don’t fit gender stereotypes, show same-gender parents, while promoting kindness and understanding.”

Richmond Drag Queen Story Hour will kick off March 14th at Fountain Bookstore, located at 1312 E. Cary St in Shockoe Slip. It will be held on the second Saturday of each month thereafter. Story hours start at 10:30am. The first reader is organizer Mx. Tara Byte (Austin Sweigart).

Richmond DQSH is always looking for readers, and drag performers of all kinds are welcome to apply. If you’re interested, email richmond@dragqueenstoryhour.org.

The world has known so many iconic mystery-solving duos, from Holmes and Watson, to Riggs and Murtaugh, to Shaggy and Scooby. As the world crumbles into shambles around us, there is only one duo we need to save us and bring us together: former President Barack Obama and former Vice President Joe Biden.

Hope Never Dies, Andrew Shaffer, while not a true satire, is equal parts silly, fun, and thrilling. Fresh out of the Oval Office, Biden narrates the story as he recants pensively about his friendship with the former president. However, Biden doesn’t have time to pine for long when he learns that his old friend, Amtrak conductor Finn Donnelly, dies in a suspicious collision on his way from Biden’s hometown of Wilmington to Washington, D.C.

In this hilarious mystery, Obama and Biden join forces once again to investigate crime scenes, infiltrate a notorious biker gang, and more in order to solve and put an end to the growing opioid epidemic in America. The novel is very quick with zero time for breaks, even during slower moving scenes.

Hope Never Dies is of course glorified fanfiction, however, one thing that is difficult today when talking about true, real breathing people is getting the voices correct without them becoming some sort of odd caricature of themselves. This is not the case with Shaffer’s novel. Granted no one will ever really know what Obama and Biden truly sound like behind closed doors, but this is as close as I think we are ever really going to get without being the proverbial fly on the wall.

But why now, why not when they were both in office? Shaffer said there wasn’t much interest in them at the time, that they were too polite and well together.

“The last couple years of the administration they were blocked at every time, everything they tried to do,” said the Iowa native. “Beyond the affordable health care act, nothing really seemed to work out for them. It wasn’t until they left office that we really saw that they were really holding us together.” 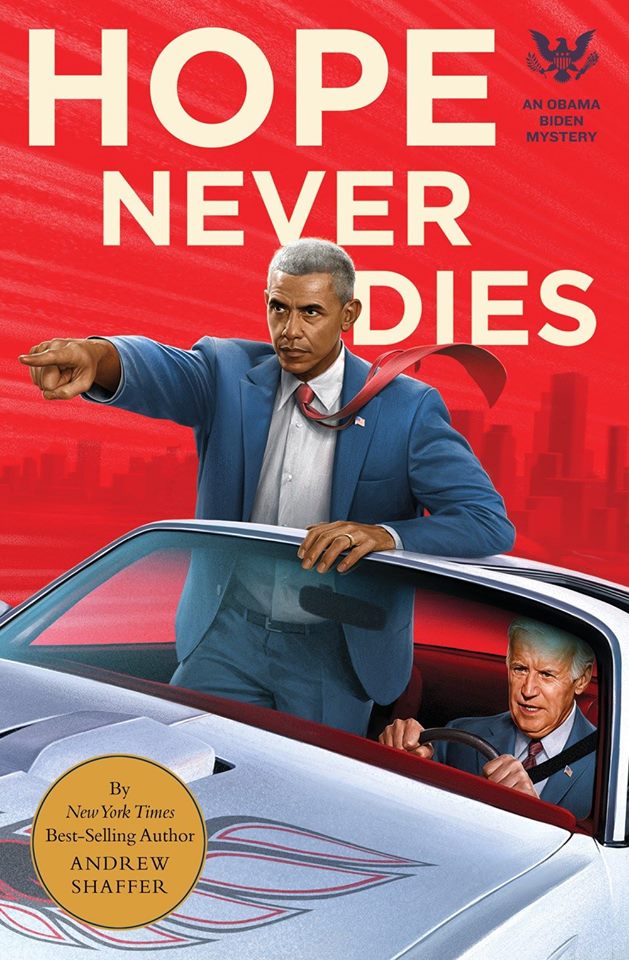 Many promos and reviews for the book make a clear comparison to the Lethal Weapon series, which is a hard image to shake. After reading the book, it’s a comparison that can’t be denied as Biden and Obama bounce off each other. Shaffer even said that the comparison was intentional if only for that buddy cop feel that fits the twosome so enigmatically.

Robin Williams once said, “Satire is alive and well in the White House”. Shaffer argues that the novel is not actually a satire even though it is a fun and funny novel that does take certain topics such as the opioid crisis and the main plot of a murder mystery serious. Regardless, humor is certainly what we need right now.

“Humor is the only thing I really know how to do,” said Shaffer. “I kind of go toward where my muse goes and where publishers are willing to go along with me. I don’t know what we need right now, but I do know the rhetoric is ratcheting up on both sides.”

It’s not the first time Shaffer has brought humor into the mix in his work. Under the pen name “Fanny Merkin,” he authored Fifty Shames of Earl Grey, a parody on the popular book, Fifty Shades of Grey.

Shaffer agreed that regardless of where you stand, humor is what we need right now. He even guaranteed that next summer we will see our favorite dynamic duo again in Hope Rides Again, which will include some familiar faces including Michelle Obama and Chicago Mayor Rahm Emanuel.

Given that Shaffer is, of course, a humorist and a fan himself of Obama and Biden and their administration, I had to ask him the most important question on everyone’s mind. What is his favorite Biden meme?

“It has Michelle and Jill [Biden] on it,” said Shaffer. “It says ‘Why are there no memes of us? Because of the fucking patriarchy.’ That’s my new favorite one.” 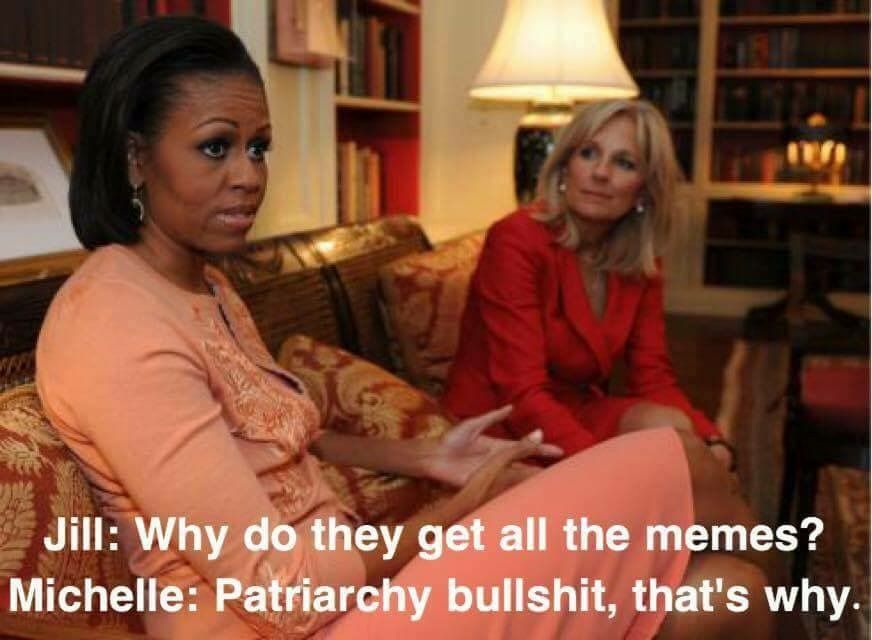 Personally, I love any meme where Biden is going out of his way to prank Trump or talking about his beloved ice cream, but that one is fantastic as well.

It would be easy to make a corny, slapstick novel about a former presidential team, but Hope Never Dies is genuinely one of my favorite books that I have read this year. Shaffer’s writing is superb and engaging and made me forget that I wasn’t solving crime with my favorite bromantic best friends.