With golf balls, grill food, and community service, Drive Shack is setting the par for driving ranges in the River City.

Driving up Route 288 just before it meets I-64, Richmonders have watched an impressive-looking structure grow over the last several months, and awaited their chance to go inside. Drive Shack, the brand-new driving range in Goochland, finally opened its doors last month for all to see — and well over two weeks past its September 20 debut, it’s still crowded with excited visitors.

Located at 1647 Four Rings Drive, Drive Shack is home to three levels of spots for golfers to hit balls into the massive driving range. It’s clear from the establishment’s food, games, and events that it welcomes more than just golfers, with plenty for families and businesses in the city to enjoy.

The driving range itself is large, taking up more than three-quarters of the facility’s 65,000 square feet. The range is also outfitted with technological attractions, meaning that it can track a golf ball’s flight path, distance, and landing location to display it on screen. The obvious benefit to this is that it allows golfers to more accurately judge where they tend to hit the ball. The range lacks any hills or natural grass, utilizing synthetic astroturf; so while it may be a good place to practice, it’s nothing like the kind of golfing on real grass one would find at a golf course.

The system also comes programmed with games for customers to play. Some are more casual, fantasy-style games for less serious golfers, but there is also the option to play a full 18 virtual holes of golf.

But those aren’t the only games at Drive Shack. The establishment also has a mini-arcade that widens its appeal; what’s more, it serves as an event space, with a full bar and food menu.

“We partnered with Performance Food Group for our food,” said Matley, “so we’re able to use local suppliers.”

But Drive Shack’s interest in the Richmond community doesn’t stop with craft beer: members of their team have been working with nonprofit organizations like GoochlandCares since before the establishment opened. Along with participating in community service with their company, Drive Shack’s management team held a food drive for the first ten days the business was open. For every pound of food collected, Drive Shack donated one dollar.

“We’re looking forward to doing that even more,” said Matley. “[We have a lot of] responsibility to give back to the community with our time.”

Personally, it’s always been my dream to be the digital embodiment of a black hole that lives and moves along the Earth’s surface, selectively devouring everything in my path. Lucky for me, and most likely you, as well, our dreams are about to come true.

In Donut County, meet BK, a lovable yet murderous raccoon who lives in a town whose economy is solely based on the production and distribution of donuts. BK and his female friend Mira find themselves annoyed by a duck delivery man, whose early-morning honking is too much to deal with. Therefore, he must be taken out–via a hole in the Earth that sucks him underground. Thus begins a violent rampage to obliterate the town. BK’s motives are also self-interested–he’s been promised a special quadcopter in exchange for delivering enough donuts, and in the process, swallowing enough of the surface world.

The hole grows larger the more things you devour, as in this game, you are the hole. Your objective is to suck as many things underground until you are big enough to suck people, cars, even buildings into your hole. Catching some weirdly inappropriate innuendos? So did we, and so did they, as expressed in their trailer.

But it doesn’t end there. The more things you suck up, the more complicated the game becomes. As a recalcitrant BK and Mira try to undo their handiwork of pulling their entire town underground, your missions evolve into physics-based puzzle games, determined by what objects you consume and how big your hole becomes. Apparently, the puzzles aren’t overwhelmingly difficult, as the main objective is here is to tell an exciting story of a psychotic raccoon and his trusty sidekick, a hole in the ground.

Just don’t all go rushing to the app store at once.

Links to purchase Donut County can be found on the website.

For those who survived Thanksgiving with conservative parents, racist uncles and aunts, and the all-around political calamity that comes with bringing disparate generations together in close proximity, we give you Push Trump off a Cliff Again. The web-based game is an emotional solution for those lingering thoughts, feelings, and concepts you wish you would have brought up around the dinner table, but didn’t have the gumption or family wherewithal to do so. 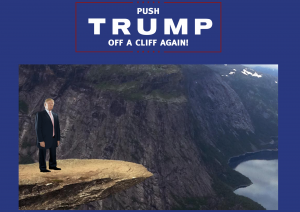 As Trump plummets to whatever end he might meet, he can be heard shouting, “ahh,” “bye,” and “duh, who put the lights out.” Glorious indignation. 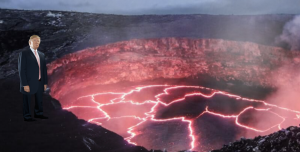 The game, released earlier this year, was the creation of Justin Hook, a former writer for the animated series Bob’s Burgers on Fox. To date, the game has sent Trump to his mythical fate 9, 948, 692 times and climbing. In a tweet, Hook said, “If you’ve ever felt like pushing Trump off a cliff, then this Zen game I built is for you.” The game’s popularity has also been bolstered by Rosie O’Donnell, who tweeted out support for the game earlier this year. Nonetheless, as you start preparing your arguments for Christmas dinner, let Push Trump off a Cliff Again be that political stress relief that gets you through any contentious holiday season.