The Virginia Pilot is reporting that the ACLU is claiming that some person(s) or organization(s) have been calling voters and telling them their polling location has changed. Director of strategic communications Bill Farrar has said that there has been a multitude of reports supporting this, but that it was hard to determine whether or not they were all original reports or just re-shares on social media.

Farrar has also said that these reports have emerged from Prince William County and that the phone numbers making the calls have originated in Gloucester County, Virginia and Adairsville, Georgia.

In a Tweet from a few hours ago, the ACLU shared a message that claimed these calls were specifically targeting Democratic voters and that “we have notified voter protection and they were already aware of the situation.” 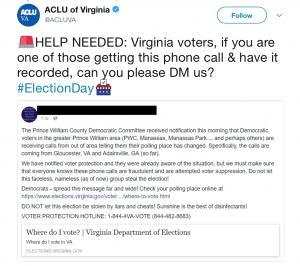 Voters can find out where their official polling place is here.