A Gogol Bordello show is an all-consuming force. The air is charged; a nearly violent happiness (ala Bjork) travels out from the stage and infects the crowd. It is as joyous and wild as a megachurch taken over by a gang of tongue-and-cheek pirates, and this past weekend’s show at The Jefferson in Charlottesville, Virginia was no exception.

Boris Pelekh played electric guitar while Tommy Gobena and Fredo Ortiz grounded the sound on bass and drums; Sergey Ryabtsev shot sparks off of his violin as Pasha Newmer made eyes at the crowd over his accordion.

Pedro Erazo whipped around the stage with his singular dreadlock flying behind, lunging back and forth between playing percussion and hanging off the proscenium to rap in Spanish. Then, of course, there was Eugene Hutz. The famous frontman with his praying mantis physique swung across the stage and strummed the guitar on a tidal wave of endless stamina, bringing the audience to near-frenzy when he drum-surfed at the front of the crowd. 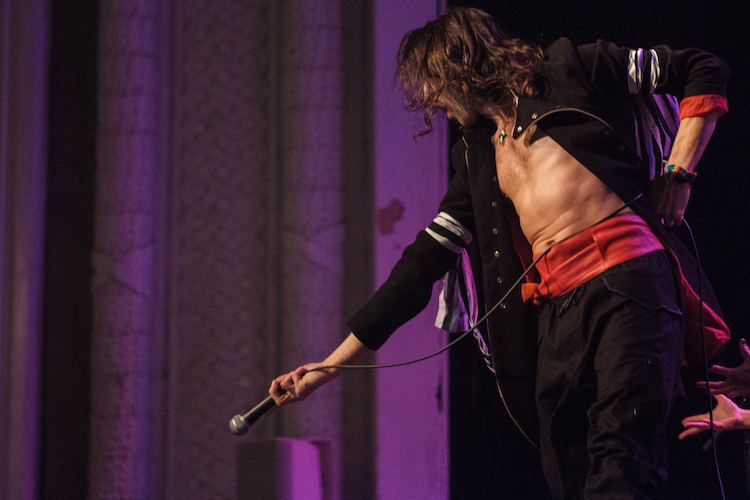 The night was a traveling rock-and-roll circus, and it gave the impression that the group’s claim to being, as they say, “undestructible” was more of a fact than a metaphor.

A veritable family of immigrants, second generationers and otherwise eternal wanderers, the bandmembers’ bond of rag-tag scallywagery has a noted presence in their work.

The global influences that Gogol Bordello has amassed are like those of a child who insists on picking up a small token of a cherished place before being coaxed to move forward, and the web of influences in the music is boundless: Balkan melodies, Brazilian cuíca drums, Italian tarantella; Russian, Spanish and English; a recent performance featuring Nick Zinner of the Yeah Yeah Yeahs and alongside Tarriona “Tank” Ball of Tank and the Bangas that took place in a pop-up shanty-town in honor of the 100-year anniversary of the Dadaist art movement.

The collective mind of Gogol Bordello may cause global whiplash.

While pressure is often put on the band to define itself based on these references, Hutz emphasized in an interview with RVAMag after the show that no one theme ties the band down, and that the upcoming album, Seekers and Finders shows the raw heart of the group’s identity.

“This is where we scrape it all off,” said Hutz. “I produced it myself …[Seekers and Finders] is an understanding that even though it comes off a combination of this and that, before anything, it’s a rock and roll band. It’s the bare bones essence.”

Since its creation in 1999, the real consistency of Gogol Bordello seems to be the universality of curiosity, an inquisitiveness that doesn’t confine itself to points on a map. It is the philosophical pioneering spirit and the bizarre human intrigue for life that is the pit of inspiration, and where Seekers and Finders takes its name.

“It’s more to suggest the point that seekers are not necessarily finders, they can be two different kinds of pursuits,” said Hutz. “It’s also about, where do we locate ourselves out of those two… I am pretty content with the thought that we are the finders, because we always knew as a unit that there’s no final destination that is an absolute idea, the road is the destination…the refinement of the way, is the finding.”

If you’re not one for ideology, there are other ways of analyzing the appeal of Gogol Bordello.

Perhaps what is so attractive about the group is that they are an honest, accurate depiction of what America is in the eyes of many. There is no original America, as that word is understood today. There is only a pursuit of something new while holding on to some things that are treasured and old, things that only really have value because we love them.

America doesn’t like to choose one thing or another, it speaks in many languages and sometimes, it doesn’t even understand itself. It is conflicted over whether it should seek or find, but it is always driven toward happiness. It is tough and scrappy and it begs and chooses interchangeably, but right or wrong, it is all very, very rock and roll.

And so they made a band about it.

Summer isn’t even in full swing yet, but there’s a mess of high quality shows set to hit the mid-Atlantic region before the year’s end. You should probably put Baltimore’s Shindig Festival on that list too.