RICHMOND – Earlier this year, gun rights groups and gun control advocates met at Capitol Square to face off in dueling rallies and seek support for their views. Gun rights advocates held blaze orange signs that read “Guns save lives.” Their adversaries preached stricter regulation with a sea of yellow signs that proclaimed the opposite – “Background checks save lives.”

This wouldn’t be the first time, or the last, that the opposite ends of the gun spectrum would meet to express their perspectives on firearms. 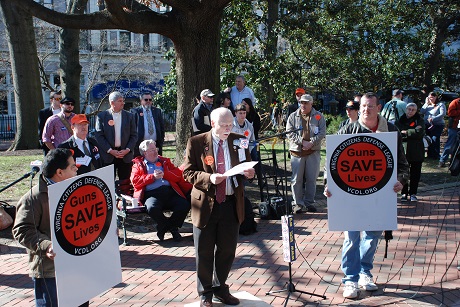 The Second Amendment has remained at the forefront of the American consciousness for decades. According to the Pew Research Center, gun policy was one of the five most important issues for voters during the 2016 presidential campaign.

As the country has become more partisan, opinions on guns have become increasingly polarizing. “The gap in how candidates’ supporters view overall priorities for the nation’s gun policy is much wider today than it has been in any presidential campaign dating to 2000,” Pew stated.
This polarization in Americans’ views on guns has created a climate where the firearms industry and the political landscape of the day share a closer relationship than one might think.
During the eight-year term of Democratic and gun-control-minded President Barack Obama, firearm sales soared. 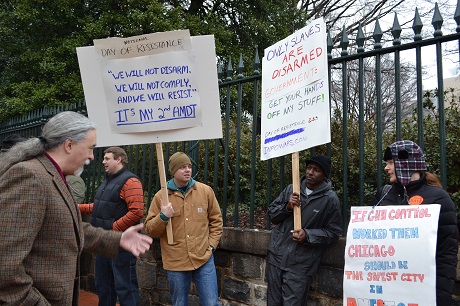 In 2016, the number of queries to the National Instant Criminal Background Check System required to purchase a gun topped 27 million – a 116 percent increase from 2008, the final year of George W. Bush’s presidency. Moreover, in the first six years of the Obama presidency, the number of guns manufactured in the United States more than doubled.

As much as firearm manufacturers may not like to admit it, the anti-gun ideology of the Obama administration provided a massive boost to business. The stock prices of two of the premier firearm manufacturers – American Outdoor Brands (formerly called Smith & Wesson) and Sturm, Ruger & Co. – experienced tenfold increases during the eight years following Obama’s 2008 election.

However, this close-knit relationship wasn’t always the case. For example, the last time a Democrat was in the White House, this connection was not as apparent. During President Bill Clinton’s second term in office from 1996-2000, the number of guns manufactured took a slight dip. During Clinton’s final two years in the Oval Office, sales followed a similar trend.
During George W. Bush’s eight years in office, the industry saw a 48 percent increase as the post-9/11 fear of terrorism spread across the country, but the rise paled in comparison to what the industry experienced during Obama’s presidency.

However, the industry began a swift downturn following the election of Republican Donald Trump, a staunch advocate of the Second Amendment, in November.

In the first three months of 2017, coinciding with Trump’s first 100 days in office, gun sale background checks dropped nearly 13 percent compared with the previous year. Taking those figures into consideration, the United States is on pace to sell nearly 1 million fewer guns than in 2016.

Virginia gun dealers have not been immune to these trends. Peyton Galanti, marketing manager for Richmond’s Colonial Shooting Academy, said the Broad Street gun range has witnessed this firsthand.

“Sales have been much slower since Election Day,” Galanti said. “The economy is still slow, especially in retail. Customers are not yet comfortable spending money. Without the panic of losing their (Second Amendment) rights, customers are making more calculated, prudent spending decisions.” 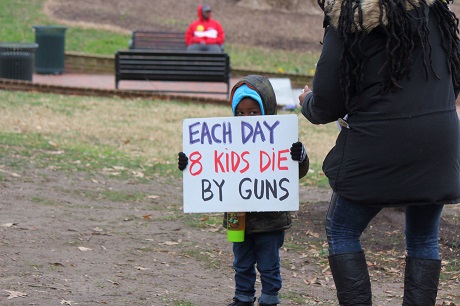 In addition to a drop in sales, overall consumer confidence in the firearms industry has plummeted since the Nov. 8 election. Stock prices of Vista Outdoor Inc. – owner of many of the most popular ammunition companies in addition to gun makers Savage Arms and Stevens – have dropped by nearly 50 percent.

This trend has led to layoffs at major manufacturers of firearms ammunitions and gun-related accessories.

In March, firearms manufacturer Remington – one of the top producers of guns in the country – laid off more than 120 workers in an upstate New York manufacturing plant the company has operated since the 19th century.

Magpul – a top weapons accessories manufacturer – laid off 85 workers in April from a Wyoming-based plant. The workers were part of a hiring increase to help meet the market demands of the company’s products throughout the Obama presidency. The layoffs came after the company saw a return to normal demand in the first quarter of 2017.

Galanti believes the fear created by the Obama administration’s anti-gun ideology led to an oversaturation of the firearms market over the course of the past eight years.

“This industry was flooded with people who wanted a piece of the pie, and these fly-by-night companies probably will not weather the storm of 2017,” Galanti said. “There have already been many layoffs around the country, and companies are restructuring. The suppressor business has been especially hurt.” Suppressors, or silencers, can be attached to gun muzzles to reduce the noise of firing.

Galanti blames the Obama administration for uncertain economic conditions that have caused an unwillingness of Americans to spend their hard-earned money on guns.

“People are reluctant to spend because American incomes have been hit so hard over the last eight years,” Galanti said. “Given much change under the current president, the economy will become unchained and roll like a steam engine again in the future. We just don’t know how long it will take.”

Many within the industry believe the economic policies of the pro-gun Trump administration will lead to stability in the gun market after what they saw as eight years of uncertainty under Obama. 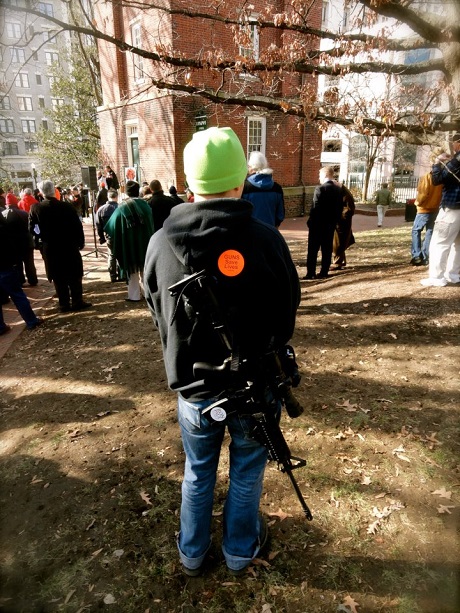 “The industry is expecting to normalize over 2017 and get back to steady consistent sales, instead of the yo-yo/panic buying of the past, where supply and demand were so off balance,” Galanti added.

However, it is unknown where that “new normal” will lie or when the market will stabilize after the distinctive surge under Obama. The pro-Second Amendment policies of the current president may stave off the fear of further control and regulation after what Trump called an “eight-year assault” on guns.

At the National Rifle Association’s annual meeting last week, Trump proclaimed that gun-owners now “have a true friend and champion in the White House.” Whether that will lead to a strong market for firearms remains to be seen.

RICHMOND – Gov. Terry McAuliffe has proposed an amendment to restore Virginia’s “one handgun a month” law. The amendment would make it a Class 1 misdemeanor for anyone other than a licensed firearms dealer to purchase more than one handgun within a 30-day period.

Virginia limited handgun purchases to one a month in 1993 when Democrats controlled the General Assembly and Douglas Wilder was governor. Back then, McAuliffe said, Virginia had the reputation of being “the gun-running capital of the East Coast.”

The law was repealed in 2012 when Republicans controlled the House and Senate and Bob McDonnell was governor. As a result, McAuliffe said Monday, “Virginia is once again becoming the go-to state for criminals to purchase weapons in bulk.”

Earlier this month, 24 people, including 22 from Virginia, were arrested on gun-smuggling charges. They transported more than 200 weapons north on Interstate 95 to New York, law enforcement officials said.

According to prosecutors, one of the suspects was recorded as saying, “There’s no limit to how many guns I can go buy from the store. I can go get 20 guns from the store tomorrow. . . . I can do that Monday through Friday. . . . They might start looking at me, but in Virginia, our laws are so little, I can give guns away.”

“When you hear a trafficker boasting about the weak gun laws in Virginia, it is crystal clear that this needs to be addressed,” Brooklyn District Attorney Eric Gonzalez told The New York Times.

“This is a great step to restore a common-sense measure that never should have been repealed in the first place,” Herring said. “Virginia’s weak gun laws make it too easy for guns to get into the hands of criminals, making our families, communities, and especially our law enforcement officers less safe, not to mention the heartbreak and damage these guns cause in neighboring states.”

McAuliffe proposed amending Senate Bill 1023 to include a one-a-month limit on handgun purchases in Virginia. The bill would prohibit Virginia from sharing information about its concealed handgun permit holders with states that do not recognize Virginia’s permits as valid within their borders.

“He’s just making a game out of it,” Stuart told The Washington Post. “It’s disheartening to me that the governor is more concerned about the people in New York City than he is about Virginia citizens who are actually . . . playing by the rules.”

The General Assembly will reconvene on April 5 to consider McAuliffe’s vetoes and recommendations. Republicans control the House and Senate and are unlikely to agree to the “one handgun a month” proposal, Stuart said.